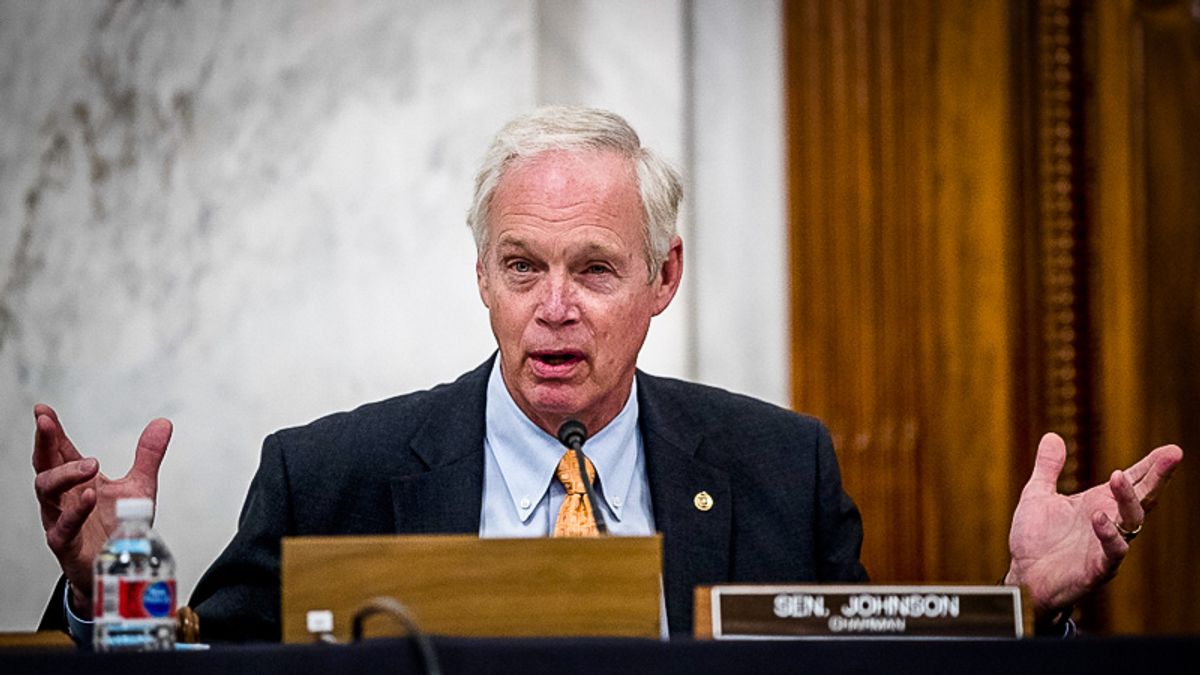 Speaking on The Jay Weber Show on Monday, Sen. Ron Johnson (R-WI) revealed that he doesn't believe the attack on the U.S. Capitol was an "armed insurrection."

Johnson got into it with fellow Sen. Mitt Romney (R-UT) on the Senate floor during the final hours of the impeachment proceedings where Johnson looked "visibly upset," Politico reported Saturday. Johnson lashed out at reporters for asking questions about the argument. He was so loud reporters in the gallery could hear him, the report said.

But when talking about it to Weber, Johnson dismissed the entire proceeding as much-ado about nothing.

Johnson did say that he believes the "breach" happened and "we all mourn the loss of life." He then went on to blame Democrats because of the George Floyd protesters burning buildings. He also alleged that House Speaker Nancy Pelosi somehow knew something ahead of time. Other Republicans now are attempting to blame her for Trump's supporters attacking the Capitol.

Johnson said that he inquired to the House and Senate Sergeant at Arms about specifics around the incidents on Jan. 6 and hasn't heard anything back from them. They're no longer there, however. The House Appropriations Committee actually called the former Capitol Police chief and the Sergeant at Arms during a hearing at the end of January where many of the answers were given that Johnson said he wanted to better understand.

"The House managers had all of this information I didn't have access to," Johnson complained. "I actually learned a lot during the presentation."

He also revealed, "I never felt threatened," noting that he never knew that the attackers were so close to the Senate and members were just 58 steps away from encountering the insurrectionists. Johnson also noted that he doesn't "know any Trump supporters who would do that," he said, meaning attack the U.S. Capitol. he also said he didn't expect anything to happen on Jan. 6. A contrast to those watching the chatrooms and Facebook groups planning the attack in plain sight.

Johnson then attacked the proceedings because there weren't witnesses called or testimony given. He claimed Democrats were "sitting on" evidence that could be helping law enforcement officers as they search for perpetrators. Law enforcement had access to all of the CCTV footage and everything that Democrats used in the impeachment case, according to a report by Quartz that explored how investigators were working to identify perpetrators.

Johnson went on to claim that Pelosi and Leader Chuck Schumer are "attempting to turn 74 million Americans who voted for Donald Trump into terrorists." He then claimed that most of the attackers at the Capitol were "helping police," and claimed that Democrats edited the video to make it look bad.

"The fact of the matter is this didn't seem like an armed insurrection to me," Johnson said, 14-minutes into the interview. "Armed, when you hear armed. Don't you think of firearms. Here's a question I'd like to have answered: How many firearms were confiscated? How many shots were fired?"

On the actual day of the attack at least 6 weapons were taken from the 52 arrested, KTLA reported. Law enforcement officers are still working to find and arrest many of the participants and thus far 230 have been charged. Some had weapons that were taken. Photos and videos of the attack clearly showed that people brought weapons.

Many of the questions asked by Sen. Johnson throughout the interview could be easily answered with a Google search.

Hear the interview below: