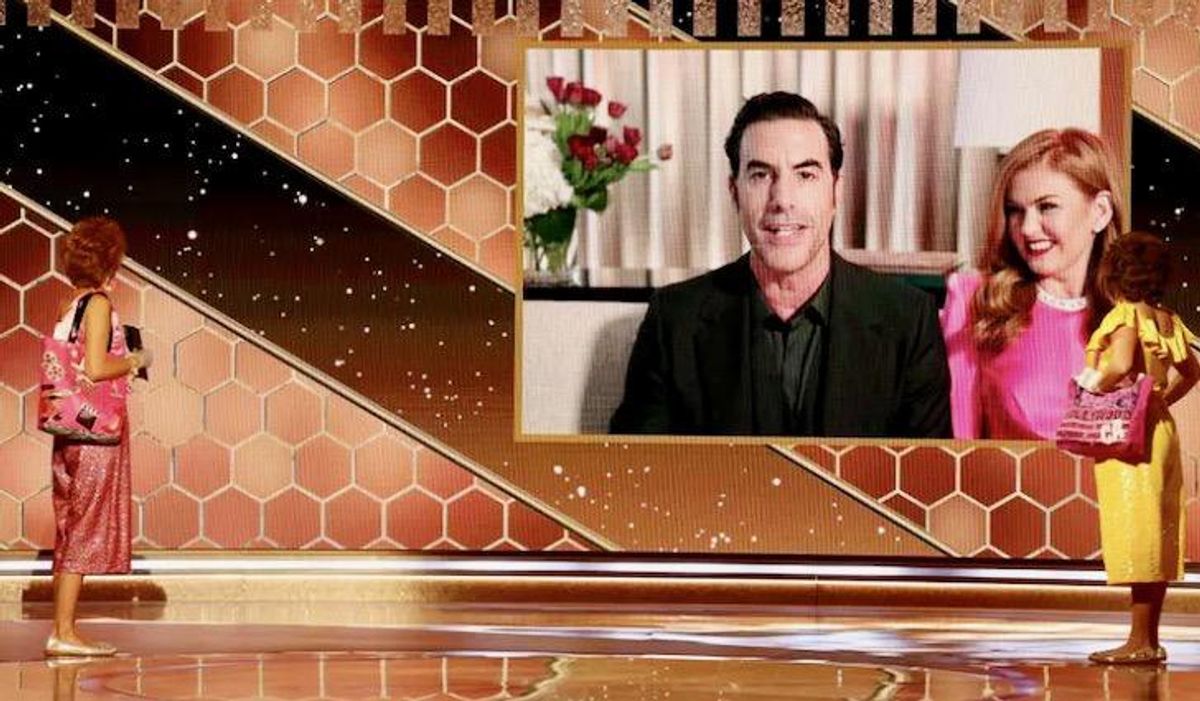 From a tracksuited rapper to a bumbling Kazakh TV reporter in a green mankini, Sacha Baron Cohen has made his name with outrageous characters who expose real people's prejudices and hypocrisy.

He also was nominated for another statuette for his work in a more serious role, as US political activist Abbie Hoffman in "The Trial of the Chicago 7".

The characters created by the versatile 49-year-old British comedian are a world away from his upbringing in London as the son of an accountant who ran a family business of clothing stores.

After attending private schools, he studied history at the University of Cambridge, where his cousin, Simon, is a professor and prominent researcher into autism.

During his time at university, Baron Cohen joined the Footlights theatre group that launched stars such as Hugh Laurie and members of Monty Python.

His big break came performing sketches on the Paramount Comedy Channel, where he developed the character Ali G -- a wannabe gangsta rapper from a nondescript town west of London.

The show made Baron Cohen a household name. Later series were aired on HBO in the United States.

Prince William even revealed that he and brother Harry taught their great-grandmother, the Queen Mum, to imitate Ali G by clicking her fingers and saying his classic "Respec'".

One interviewee was Donald Trump, who said last year of Baron Cohen: "That's a phony guy. And I don't find him funny."

To promote "Borat: Cultural Learnings of America for Make Benefit Glorious Nation of Kazakhstan", he posed on the beach at the Cannes film festival in a green mankini that left little to the imagination.

Along with an infamous nude fight scene, it showed Borat in cringe-making encounters with ordinary Americans.

At a rodeo, he called for then-president George W. Bush to "drink the blood of every single man, woman and child of Iraq", to cheers from the crowd.

The New York Times said the film's comedy was "as pitiless as its social satire, and as brainy". It topped box offices in Britain and the United States.

Baron Cohen, who is Jewish and uses Hebrew for Borat, won a Golden Globe for best actor, and the film grossed more than $260 million worldwide.

But the depiction of Kazakhstan as backward infuriated the Central Asian state, which banned the film's release.

Baron Cohen told Rolling Stone magazine the joke was "on people who can believe that the Kazakhstan that I describe can exist".

The follow-up, "Borat Subsequent Moviefilm", unfurls against the tense backdrop of Trump's re-election campaign and the coronavirus pandemic.

In one scene at a gun rights rally, Baron Cohen -- disguised as a bluegrass singer -- encouraged people to sing along to lyrics about injecting former president Barack Obama and others with the "Wuhan flu".

He ended up fleeing when his cover was blown.

"We were surrounded by a bunch of people, an angry mob with guns," he told NPR, and vowed not to work undercover again.

The film also shows Trump's lawyer and ex-New York mayor Rudy Giuliani apparently reaching into his trousers in a hotel room, after being interviewed by Borat's daughter (Maria Bakalova).

Giuliani, oblivious to the hidden cameras, insisted he was tucking in his shirt.

On Sunday night at the Globes, Baron Cohen launched a few zingers about Giuliani, saying: "I mean, who can get more laughs out of one unzipping?"

He told NPR he revived Borat in a bid to somehow influence the 2020 presidential election -- against Trump.

"We felt we had to do something, we felt democracy was in real danger," he said.

The film was released on Amazon Prime Video last year. In addition to the two awards it won, Bakalova was also nominated.

In 2018, he was nominated for a Golden Globe as best actor for his US satirical series "Who is America?"

Baron Cohen, whose 2012 film "The Dictator" was described as offering "weapons-grade offensiveness", has also acted in non-comedy films including "Les Miserables".

In 2019 he was nominated for best actor at the Golden Globes for playing a top Mossad agent in the Netflix series "The Spy."

Baron Cohen rarely gives interviews out of character and is reticent about his personal life.

"Some people love being recognized and getting the attention. I don't love it," he told NPR.

He is married to actress Isla Fisher. The couple have said they bonded over studying at clown school. They have three children.

In 2015, the couple donated $1 million to help Syrian refugees.