Sarah Palin strangely uses the insurrection to attack the media 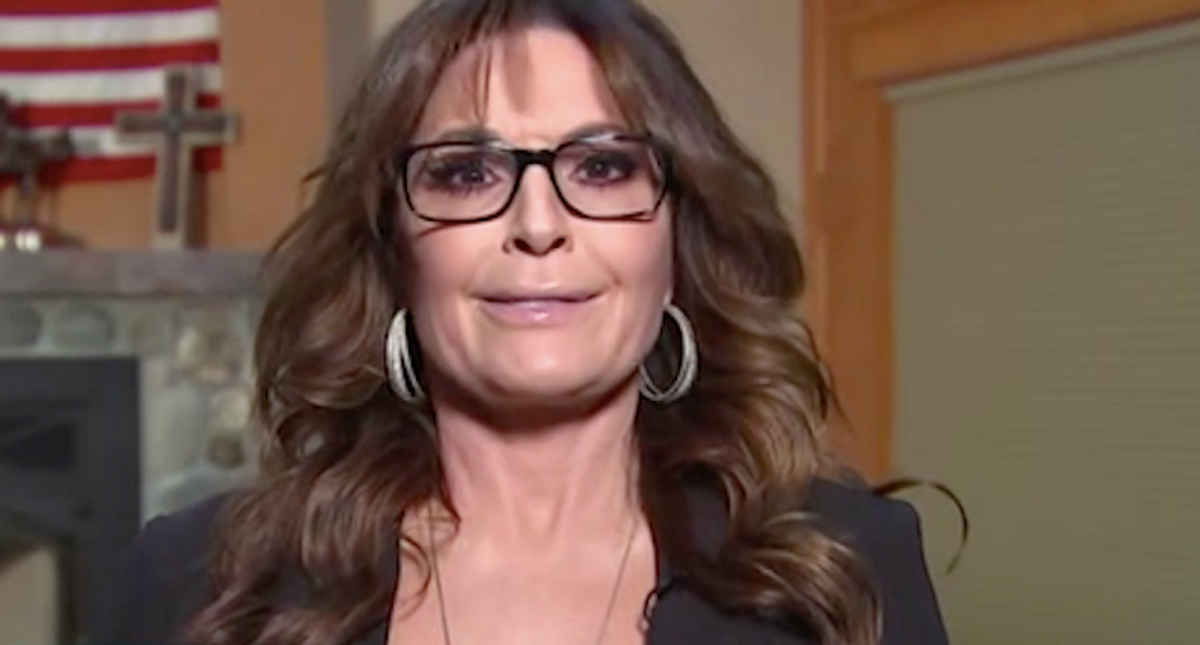 None other than Sarah Palin has jumped into the fray for a little counterprogramming on behalf of the insurrectionists unleashed today by Donald Trump.

A large headline at Townhall.com blared: "'Knock It Off': What Has Sarah Palin Peeved About How Media Are Reporting DC Protesters"

Here's how it was reported at the wacko right-wing website:

"With the nation's capitol in chaos on Wednesday as protesters stormed the Capitol Building, Sarah Palin had a message for the media about how they ought to be reporting.

"Sharing a photo of a bare-chested man wearing horns standing with other individuals inside the building, the former Alaska governor said they need to be identified before labeling them.

"Media: quit labeling DC protestors 'Conservatives, Republicans, Tea Partiers, Trump Supporters, etc' LOOK IN TO (sic) WHO THESE PEOPLE ARE who'd choose an apparent leaderless insane swarm to create a perception of condoned violence. KNOCK IT OFF," she tweeted. "And to any insincere, fake DC "patriots" used as PLANTS - you will be found out."

"Jay Richards, research assistant professor at The Catholic University of America, questioned who would benefit most from such a situation.

"One question: Who are the greatest beneficiaries from a crowd identified with MAGA and Trump storming the US Capitol, and footage of it being broadcast around the country and the world?" he asked. Richards pointed out vast numbers of Trump supporters were outside not engaged in a confrontation with Capitol Police to storm the building.

"The reality is, we don't know at this point who exactly is storming the Capitol. We do know there are hundreds of thousands of pro-Trump people outside not doing so," he said. "So maybe it would be prudent to suspend judgment on who is doing what until we know more."

Alternately, maybe it would be prudent not to get one's information from TownHall.com.

Immediately after Trump's mob stormed the Capitol, here's how the website had reported the terrorism:

That was right around the time the similarly cranked information providers at TheGatewayPundit.com offered this:

"BREAKING: Patriots Have Made Their Way INSIDE THE CAPITOL — Pence Evacuated, Lawmakers Sheltering in Place" the Gateway Pundit trumpeted. Its story, such as it was, began "Patriots have now made their way past the police and into the Capitol building."