Scientists in Antarctica discover a vast, salty groundwater system under the ice sheet – with implications for sea level rise

The Conversation
This image obtained from NASA on November 14, 2012 shows a view of Sheldon Glacier with Mount Barre in the background, seen from Ryder Bay near Rothera Research Station, Adelaide Island, Antarctica (AFP Photo/)

A new discovery deep beneath one of Antarctica’s rivers of ice could change scientists’ understanding of how the ice flows, with important implications for estimating future sea level rise.

Glacier scientists Matthew Siegfried from Colorado School of Mines, Chloe Gustafson from Scripps Institution of Oceanography and their colleagues spent 61 days living in tents on an Antarctic ice stream to collect data about the land under half a mile of ice beneath their feet. They explain what the team discovered and what it says about the behavior of ice sheets in a warming world.

What was the big takeaway from your research?

First, it helps to understand that West Antarctic was an ocean before it was an ice sheet. If it disappeared today, it would be an ocean again with a bunch of islands. So, we know that the bedrock below the ice sheet is covered with a thick layer of sediments – the particles that accumulate onto ocean floors.

What we didn’t know was what was in the tiny pore spaces among those sediments below the ice.

We expected to find meltwater coming from the ice stream above, a fast-moving channel of ice that flows from the center of the ice sheet toward the ocean. What we didn’t expect, but we found in this thick layer of sediments, was a huge amount of groundwater – including saltwater from the ocean.

Our findings suggest that this salty groundwater is the largest reservoir of liquid water below the ice stream we studied, and likely others, and it may be affecting how the ice flows on Antarctica.

How Antarctica’s ice flows through ice streams and ice shelves to the ocean. NASA.

Liquid water is incredibly important to how fast an ice stream moves. If there’s liquid water at the base of an ice stream, it flows fast. If that water freezes or the base dries out, the ice screeches to a stop.

Models of ice streams typically consider only whether ice at the base has reached the melting point or if water has flowed from upstream along the base of the ice. Scientists had never considered that more water was available under the ice sheet, let alone water that is much saltier, which keeps water from freezing at lower temperatures. (Think about why communities put salt on roads in winter.) 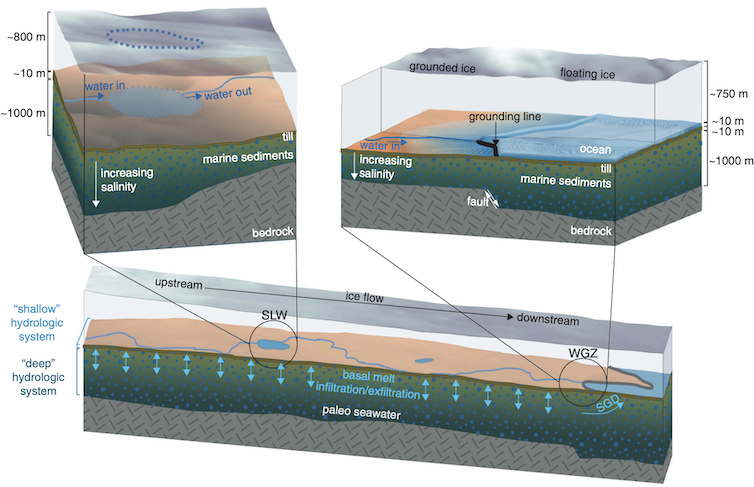 Illustrations of the Whillans ice stream show liquid water under the ice from subglacial lakes (left) and groundwater within the sediment. The ice stream moves at about 300 meters per year.

Knowing that there is a massive reservoir of water that may be linked to how fast-flowing regions of Antarctica behave means scientists need to rethink our understanding of ice streams.

What does finding liquid water in the sediments tell scientists about Antarctica?

The salty groundwater was a clear sign of how far inland the boundary between the ice sheet and the ocean once reached.

The fact that there were marine waters beneath our feet meant that the grounding line was upstream of us at some point, at least 70 miles (110 kilometers) from where it is today. 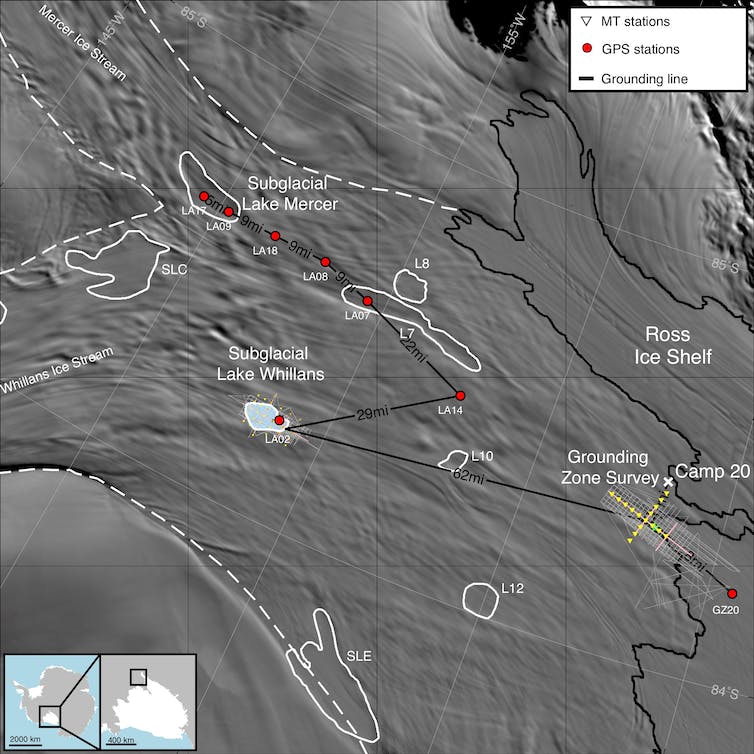 The team’s survey points on the Whillan’s ice stream in 2018-2019 and the grounding line.

The next question is when it got there.

We argue in our paper that it can’t be too old. The groundwater is flowing, and fresh water is coming into the sediments from the glacier above. We estimate that most of this salty water arrived in the subglacial system within the past 10,000 years, based on how much radiocarbon has been found in the upper sediment in a previous a study.

The ocean would have deposited that seawater when the ice sheet got smaller during warm periods in the past.

Whillans ice stream is pretty remote. How did you determine what was happening a mile below you?

Our site is about a two-hour flight from McMurdo Station, Antarctica. The plane lands on skis and drops off everything you need to live. Then it takes off, and it’s you, your field team, and a couple pallets of cargo.

In all, we slept 61 days in a tent that season. Each day, we packed our snowmobiles, put in the coordinates for a site, and installed magnetotelluric stations.

Each station has three magnetometers – pointing east-west, north-south and vertical – and two pairs of electrodes – aligned east-west and north-south. These instruments can detect the electromagnetic signatures of different Earth materials in the subsurface.

Installing a magnetotelluric station on the Whillans ice stream.

So, by measuring electric and magnetic fields on the ice surface, we can figure out the conductivity of the subsurface materials, including water. It’s the same method the oil and gas industry used to find fossil fuels.

We could see the groundwater, and since salt water has far greater conductivity than fresh water, we could estimate how salty it was.

Any time we’ve poked a hole through Antarctica, it’s been teeming with microbial life. There’s no reason to think microbes aren’t gnawing away at nutrients in the groundwater, too.

When you have microbial ecosystems that are cut off for extended periods of time – in this case, seawater was likely deposited there 5,000-10,000 years ago – you start to have a pretty good analog for how life might exist on other planetary bodies, locked in the subsurface and buried underneath thick ice.

Where there’s life, there is also the question of carbon.

We know that there are microbes in subglacial lakes and rivers at the top of the sediment that are consuming carbon and transforming it into greenhouse gases like methane and carbon dioxide. We know all of this carbon ultimately gets transferred to the Southern Ocean. But we still don’t have great measurements of any of this.

High winds, common at the authors’ camp on the Whillans ice stream, create challenges for the electromagnetic method. Each snow particle has static electricity that creates noise for the instruments.

This is a new environment, and there’s a lot of research still to do. We have observations from one ice stream. It’s like sticking a straw in the groundwater system in Florida and saying, “Yeah, there’s something here” – but what does the rest of the continent look like?