Dead, shrivelled frogs are unexpectedly turning up across eastern Australia

The Conversation
The stony creek frog is one of the species hit by this mysterious outbreak. Jodi Rowley, Author provided
Over the past few weeks, we've received a flurry of emails from concerned people who've seen sick and dead frogs across eastern Victoria, New South Wales and Queensland.

About a month ago, I noticed the Green Tree Frogs living around our home showing signs of lethargy & ill health. I was devastated to find about 7 of them dead.

We previously had a very healthy population of green tree frogs and a couple of months ago I noticed a frog that had turned brown. I then noticed more of them and have found numerous dead frogs around our property.


And another said she'd seen so many dead frogs on her daily runs she had to “seriously wonder how many more are there".

So what's going on? The short answer is: we don't really know. How many frogs have died and why is a mystery, and we're relying on people across Australia to help us solve it.

Why are frogs important?

Frogs are an integral part of healthy Australian ecosystems. While they are usually small and unseen, they're an important thread in the food web, and a kind of environmental glue that keeps ecosystems functioning. Healthy frog populations are usually a good indication of a healthy environment. 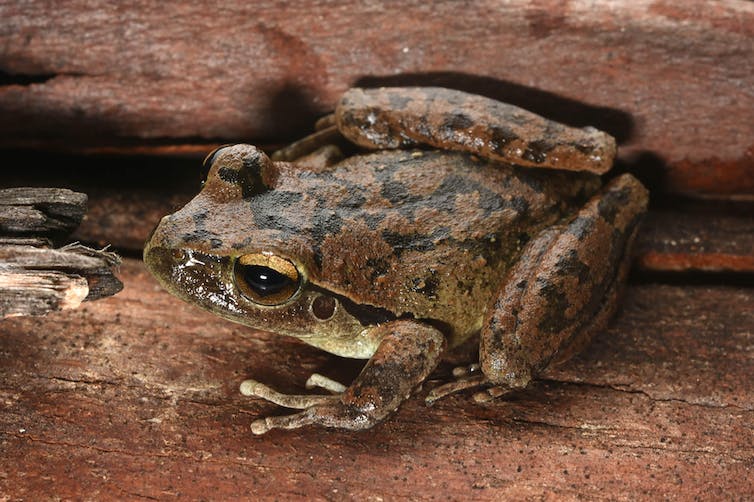 The stony creek frog is one of the species hit by this mysterious outbreak.

They eat vast amounts of invertebrates, including pest species, and they're a fundamental food source for a wide variety of other wildlife, including birds, mammals and reptiles. Tadpoles fill our creeks and dams, helping keep algae and mosquito larvae under control while they too become food for fish and other wildlife.

But many of Australia's frog populations are imperilled from multiple, compounding threats, such as habitat loss and modification, climate change, invasive plants, animals and diseases.

In most circumstances, it's rare to see a dead frog. Most frogs are secretive in nature and, when they die, they decompose rapidly. So the growing reports of dead and dying frogs from across eastern Australia over the last few months are surprising, to say the least.

While the first cold snap of each year can be accompanied by a few localised frog deaths, this outbreak has affected more animals over a greater range than previously encountered.

This is truly an unusual amphibian mass mortality event.

In this outbreak, frogs appear to be either darker or lighter than normal, slow, out in the daytime (they're usually nocturnal), and are thin. Some frogs have red bellies, red feet, and excessive sloughed skin. 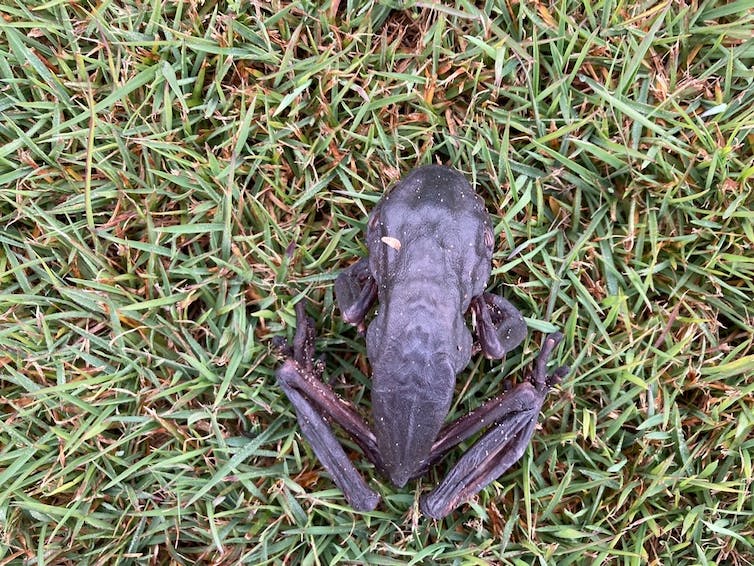 This frog is widespread and generally rather common. In fact, it's the ninth most commonly recorded frog in the national citizen science project, FrogID. But it has disappeared from parts of its former range.

Other species reported as being among the sick and dying include Peron's tree frog (Litoria peronii), the Stony Creek frog (Litoria lesueuri), and green stream frog (Litoria phyllochroa). These are all relatively common and widespread species, which is likely why they have been found in and around our gardens.

We simply don't know the true impacts of this event on Australia's frog species, particularly those that are rare, cryptic or living in remote places. Well over 100 species of frog live within the geographic range of this outbreak. Dozens of these are considered threatened, including the booroolong Frog (Litoria booroolongensis) and the giant barred frog (Mixophyes iteratus). 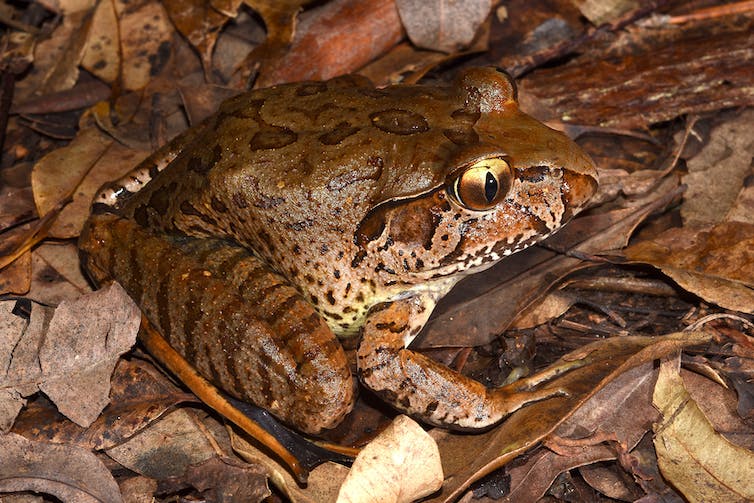 The giant barred frog is a threatened species that lives in the geographic range of this outbreak.

Amphibians are susceptible to environmental toxins and a wide range of parasitic, bacterial, viral and fungal pathogens. Frogs globally have been battling it out with a pandemic of their own for decades — a potentially deadly fungus often called amphibian chytrid fungus.

This fungus attacks the skin, which frogs use to breathe, drink, and control electrolytes important for the heart to function. It's also responsible for causing population declines in more than 500 amphibian species around the world, and 50 extinctions.

For example, in Australia the bright yellow and black southern corroboree frog (Pseudophryne corroboree) is just hanging on in the wild, thanks only to intensive management and captive breeding. 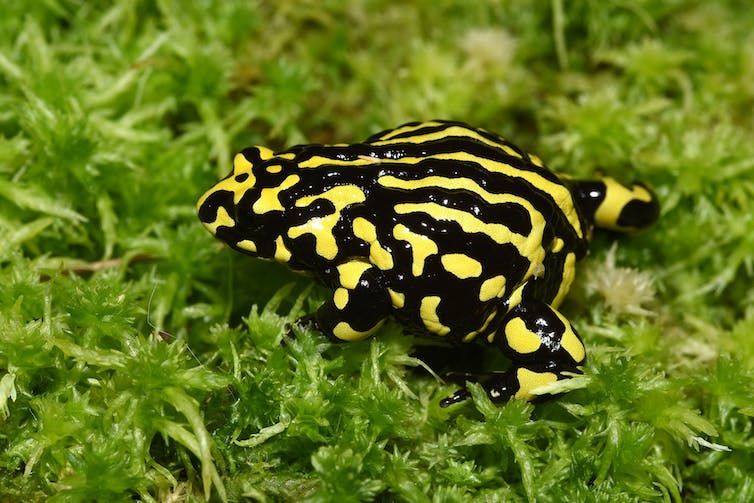 The teeny tiny southern corroborree frogs have been hit hard by the chytrid fungus.

Curiously, some other frog species appear more tolerant to the amphibian chytrid fungus than others. Many now common frogs seem able to live with the fungus, such as the near-ubiquitous Australian common eastern froglet (Crinia signifera).

But if frogs have had this fungus affecting them for decades, why are we seeing so many dead frogs now?

Read more: A deadly fungus threatens to wipe out 100 frog species – here's how it can be stopped

Well, disease is the outcome of a battle between a pathogen (in this case a fungus), a host (in this case the frog) and the environment. The fungus doesn't do well in warm, dry conditions. So during summer, frogs are more likely to have the upper hand.

In winter, the tables turn. As the frog's immune system slows, the fungus may be able to take hold. 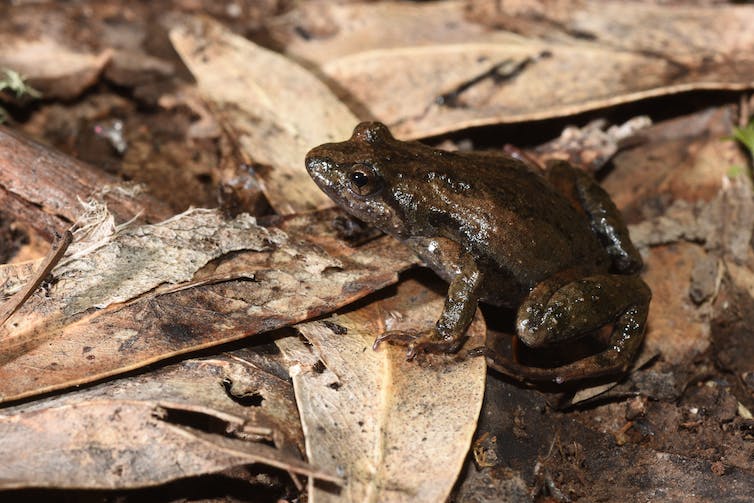 The near-ubiquitous Austrlaian common eastern froglet is one species that seems able to live with the devastating chytrid fungus.

To date, the Australian Registry of Wildlife Health has confirmed the presence of the amphibian chytrid fungus in a very small number of sick frogs they've examined from the recent outbreak. However, other diseases — such as ranavirus, myxosporean parasites and trypanosome parasites — have also been responsible for native frog mass mortality events in Australia.

It's also possible a novel or exotic pathogen could be behind this. So the Australian Registry of Wildlife Health is working with the Australian Museum, government biosecurity and environment agencies as part of the investigation.

Here's how you can help

While we suspect a combination of the amphibian chytrid fungus and the chilly temperatures, we simply don't know what factors may be contributing to the outbreak. 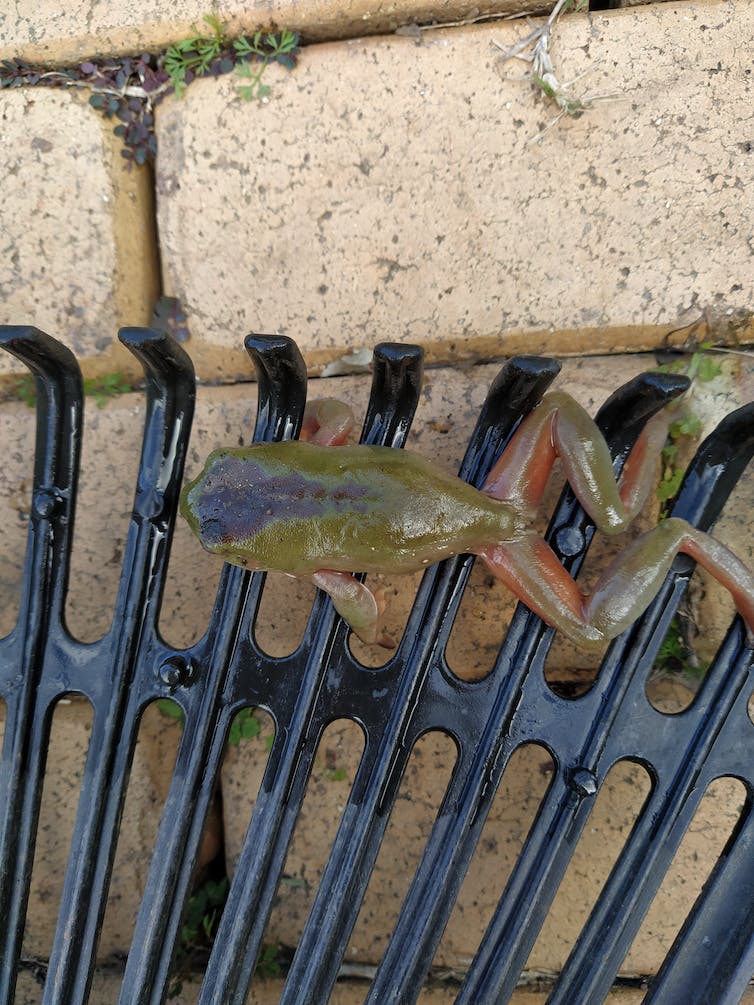 Why green tree frogs are dying en masse is still a mystery.

We also aren't sure how widespread it is, what impact it will have on our frog populations, or how long it will last.

While the temperatures stay low, we suspect our frogs will continue to succumb. If we don't investigate quickly, we will lose the opportunity to achieve a diagnosis and understand what has transpired.

We need your help to solve this mystery.

Please send any reports of sick or dead frogs (and if possible, photos) to us, via the national citizen science project FrogID, or email calls@frogid.net.au.

Read more: Clicks, bonks and dripping taps: listen to the calls of 6 frogs out and about this summer