The Conversation
Photo by Finding Dan | Dan Grinwis on Unsplash

In July, South Africa suffered the worst violence since the 1990s. Highways were blocked and businesses, warehouses and other property looted and set alight. More than 300 people died.

In mid-October, people were again shocked when a group of men, said to be Somali nationals, openly brandished high calibre weapons during a fight between Somali shop owners and local taxi drivers in public view in Gqeberha, Eastern Cape.

Not long after 56 people, said to be disgruntled military veterans, were arrested after allegedly holding two government ministers and a deputy minister hostage in Pretoria. They allegedly demanded compensation for their role in the liberation struggle against minority white rule.

These violent incidents led to a question being asked: has South Africa become a failed state? The issue has come up and warnings sounded before this year’s events.

I teach political risk analysis – in essence the study of potential harms to a country’s stability and future. The work entails providing new, comprehensive current-day political risk analyses of South Africa each year. This has to be based on a variety of variables, ranging from ‘legitimacy of government’ to ‘safety and security’ to ‘socio-economic conditions’ and many more.

The concept of a failed state is contested. But, in general, it applies to states where the administrative, political, and economic systems have become so weak that key governmental functions become inoperable or even disintegrate.

This, in turn, affects the ability of a government to support or improve the conditions of life for most of the citizenry.

Looking at South Africa, it can be argued that some things in the country are still the same since 1994 in terms of the broad macro-political risk profile of the country. Yet, serious political risks – such as war, revolution, a coup d’état, hostile neighbours, military involvement in politics – remain relatively low.

Even violent racial or ethnic conflict do not seem to be of major concern as they have never threatened the post-1994 democratic project in any substantial manner.

Political risk relating to several variables in the socio-economic domain are increasingly of considerable concern. For example, government shortcomings in providing or facilitating enough housing, water, electricity and jobs to millions of people is a huge source of frustration.

As much as South Africa has changed for the better in certain areas in the sense that it has, for example, become a more racially just society several new red flags have begun to appear in the past two decades.

The country witnessed increasingly high levels of violence and or dissatisfaction associated with labour unrest. Violent protests have become a common phenomenon. In fact, risk in the form of violent service delivery protests and other unrest has increased markedly.

Other forms of socio-economic frustrations also increased as well as xenophobia.

Overall the country ranked 128th out of 161 countries in the most recent Global Peace Index, which is an index measuring the peacefulness of countries on the basis of 23 quantitative and qualitative indicators.

A number of other factors also pose high degrees of political risk. These pertain to a need for solid and visionary political leadership at all levels of government to deal with a range of governance problems, high levels of corruption, inefficient government administration, especially at municipal level. Added to this is the need to tackle the never-ending institutional challenges facing Eskom, the power utility, resulting in erratic electricity supply to the detriment of the economy.

Underlying the protests and related frustrations are several years of low economic growth and poor governance.

Unemployment is extremely high, amid low levels of education and skills. Youth unemployment, especially, remains one of South Africa’s most pressing challenges.

Another problem area is incapacitated law enforcement institutions. Recently, parliamentarians expressed concern that the country’s law enforcement agencies did not have the capacity to handle situations like civil unrest, if it was more widespread than the recent unrest in July 2021. In fact, the Human Rights Commission recently heard that the South African Police Service was not “equal to the task” when riots and looting broke out in KwaZulu-Natal and Gauteng in July.

For the Police Commissioner to admit before a commission of inquiry that a country’s police force was outmanned, outgunned and outrun when called upon to protect citizens, their property and public property against the looters, is most concerning.

So, is the country now a failed state or about to become one?

The annual Fund for Peace’s Fragile State Index can be taken as an authoritative indicator of international state fragility and political risk. The index maps states across the globe and ranks them in terms of 12 categories – from sustainable (shades of blue) to stable (shades of green) to warning (shades of yellow) to alert (shades of red). 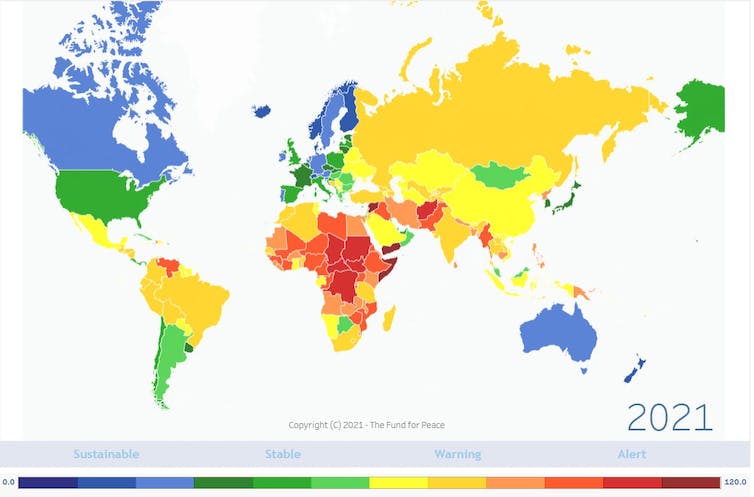 South Africa’s standing in the index is cause for concern. It has moved from stable in 2006 to warning in 2021. This clearly indicates a much higher level of political risk in the country. Interestingly, the opposite happened to Botswana, which moved from the warning to the stable category.

In my view South Africa is probably still in the medium-risk category of political risk.

Countries like Syria, Afghanistan, Yemen, Iraq, Somalia, the Democratic Republic of Congo, Central African Republic, Chad, Sudan and South Sudan, which are either in a state of armed conflict or recovering from armed conflict, are indicated as far more ‘fragile’ on the Fragile State Index, and find themselves in the alert category. These countries are all showing high levels of institutional and social fragility, based on publicly available indicators that measure the quality of policy and institutions and manifestations of fragility. South Africa, on the other hand, is also miles away from experiences in these countries.

This implies that state failure is of much more relevance to these countries than South Africa.

Still, the evidence shows that political risk in the country has increased markedly in certain areas over the past two decades. It’s clear that South Africa has been moving from ‘medium risk’ into ‘high-medium risk’ or even ‘high risk’ in recent years.

Nevertheless, to call South Africa a failed state would be an exaggeration.