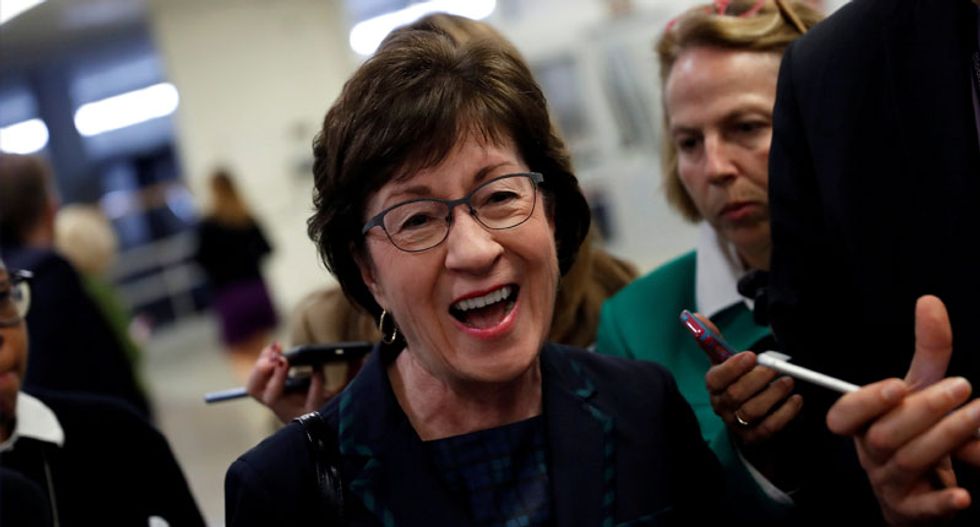 "The U.S. has an unacceptably high maternal mortality rate w/ stark racial disparities, and this crisis impacts women veterans as well." she wrote on Twitter, "A bill Sen. Duckworth and I authored in the Senate aims to change this. Today, President Biden signed it into law, which will improve veterans' maternal care."

The U.S. has an unacceptably high maternal mortality rate w/ stark racial disparities, & this crisis impacts women veterans as well. A bill @SenDuckworth & I authored in the Senate aims to change this. Today, @POTUS signed it into law, which will improve veterans' maternal care.pic.twitter.com/Xkx8BItgmJ
— Sen. Susan Collins (@Sen. Susan Collins) 1638297798

Instead of praise, Collins was flooded with mention of her past support for Supreme Court Justice Brett Kavanaugh.

Collins previously said that she did not believe Kavanaugh would overturn Roe v. Wade, as she said he considered the matter to be "settled law." Asked on Thursday whether or not she believed that Kavanagh still sees Roe as settled law following his line of questioning during this week's oral arguments in a case about Mississippi's 15-week abortion ban, Collins demurred and simply said, "I think we all need to wait and see what the final decision is."

After Judge Kavanaugh had expressed support for a similarly restrictive anti-abortion law in Louisiana, Collins told CNN that Kavanaugh had assured her during his confirmation process that the landmark opinion was safe.

"He said under oath many times, as well as to me personally many times, that he considers Roe to be 'precedent upon precedent,' because it had been reaffirmed in the Casey v. Planned Parenthood case." she said.

When that law was struck down by the court, with Kavanaugh in the minority supporting it being upheld, Senator Collins again said that his vote was "no indication in his dissenting opinion that he supports overturning Roe."

If Mississippi's abortion restrictions are upheld by the Supreme Court, it seems clear that abortion will become a state issue once again. Mississippi currently has only one licensed abortion facility in the state, leaving that healthcare access inaccessible to thousands of women.