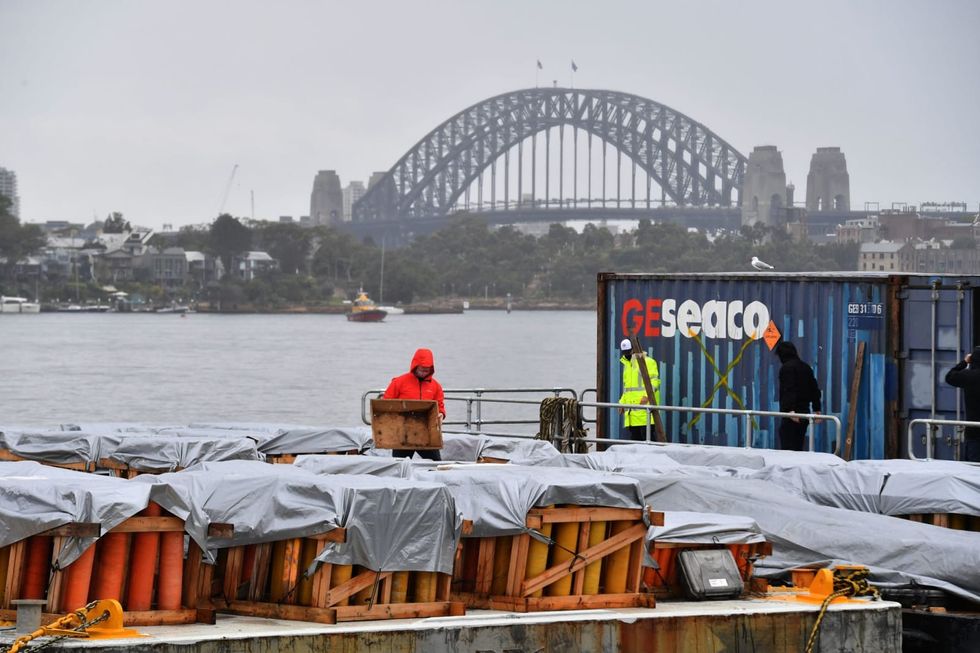 Workers put the final touches to barges of fireworks during a press conference for previewing preparations for the New Year's Eve fireworks display in Sydney. Sydney's famous fireworks show to go ahead despite record Covid-19 numbers. Mick Tsikas/AAP/dpa

Sydney on Wednesday released details about its fireworks display, for which some 17,000 tickets for vantage points managed by the city were already sold, according to news agency AAP.

The agency quoted a city spokesperson as saying they could not predict the turnout for the pyrotechnic show, but five of the six locations managed by the city were sold out and tickets for another 25 locations, with capacity for nearly 87,000 people, were still on sale.

Vaccination and the use of masks will not be mandatory to attend the ticketed venues, though encouraged, organizers said.

The state of New South Wales on Wednesday reported a staggering 11,201 new coronavirus infections, almost doubling its previous record, as the local government struggled to control soaring numbers believed to be driven by the Omicron variant of the virus.

Before the pandemic, up to a million people would normally descend on the harbour to watch the fireworks.

Last year the show was confined to the Harbour Bridge and only those whose home, roof or hotel room had views over the harbour were able to see the fireworks live, with all outside viewpoints closed.

"To ask such a question is nearly to answer it," the court filing said. "Consistent with the statutory text and context, we hold that the 1872 Amnesty Act removed the Fourteenth Amendment’s eligibility bar only for those whose constitutionally wrongful acts occurred before its enactment. Accordingly, we reverse the district court’s grant of injunctive relief and remand for further proceedings."