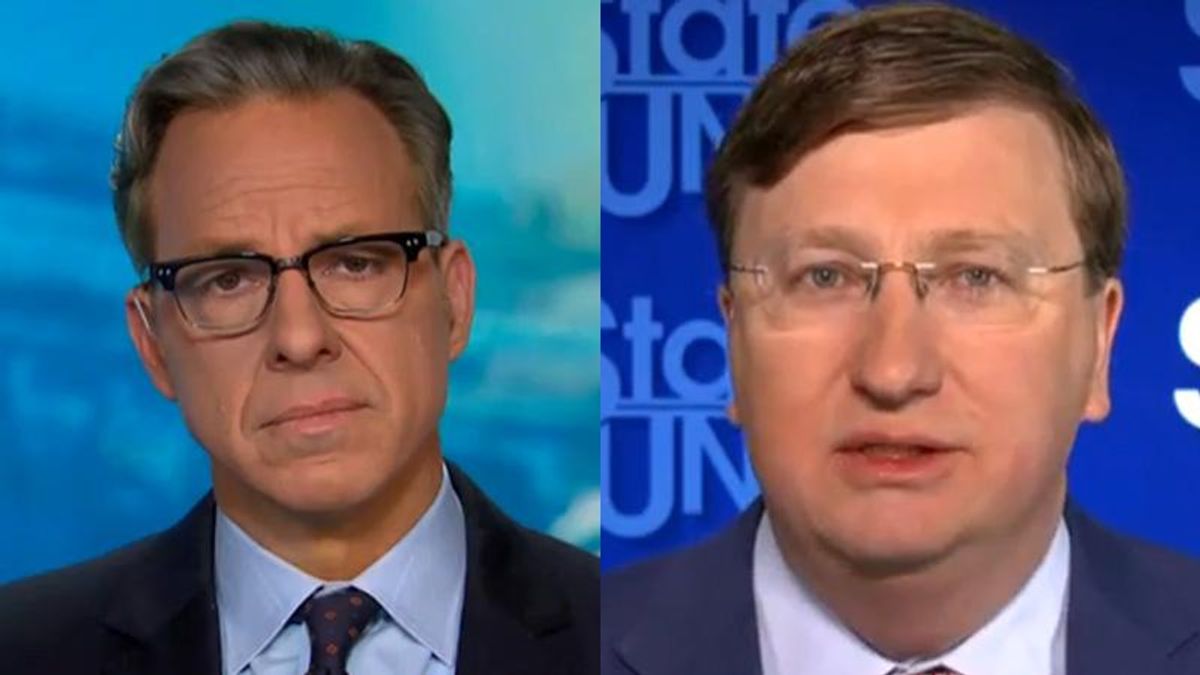 Tapper started off his interview this weekend by telling Reeves that health experts were warning that "people will get sick and die" because of his decision. But Reeves insisted he was just "following the data."

"We know more people are likely to get sick and die without mask mandates and that is what the science says," Tapper said. "Why is this a tradeoff you're willing to make?"

But Reeves insisted his state was in good shape. He also lashed out President Joe Biden, who last week accused Reeves and Texas Gov. Greg Abbott of "Neanderthal thinking" for their decisions to end mask mandates and other measures designed to prevent the spread of COVID-19.

Tapper then asked Reeves if he thought it was a good idea for the residents of his state to continue wearing masks, to which Reeves replied that he did.

"If you have not received the vaccination and you're going into a large crowd or if you're going out to dinner, I strongly encourage Mississippians and people across the country to wear a mask because I believe that it does, in fact, reduce the ability of individuals to spread the virus. No question about that," Reeves said.

"Only about 9% of Mississippi residents have been fully vaccinated – 9%," Tapper noted. "The governor of neighboring Alabama, Republican Kay Ivey, is extending her mask mandate another month. Why not do the same thing so you can get more of your constituents vaccinated before relaxing your measures? We all want to go back to normal. The fear is if you do this, it will take longer to actually get back to normal."

"Well, I should start by saying I love and appreciate Governor Ivey over in Alabama," Reeves replied. "She is a great friend of mine and has been for many, many years. But when you look at the numbers in Mississippi, it doesn't justify government intervention. It just simply does not. It doesn't justify statewide mask mandates. You've made a very valid point earlier that statewide mask mandates have been in effect in our state over the last six months and we are not going back to that."