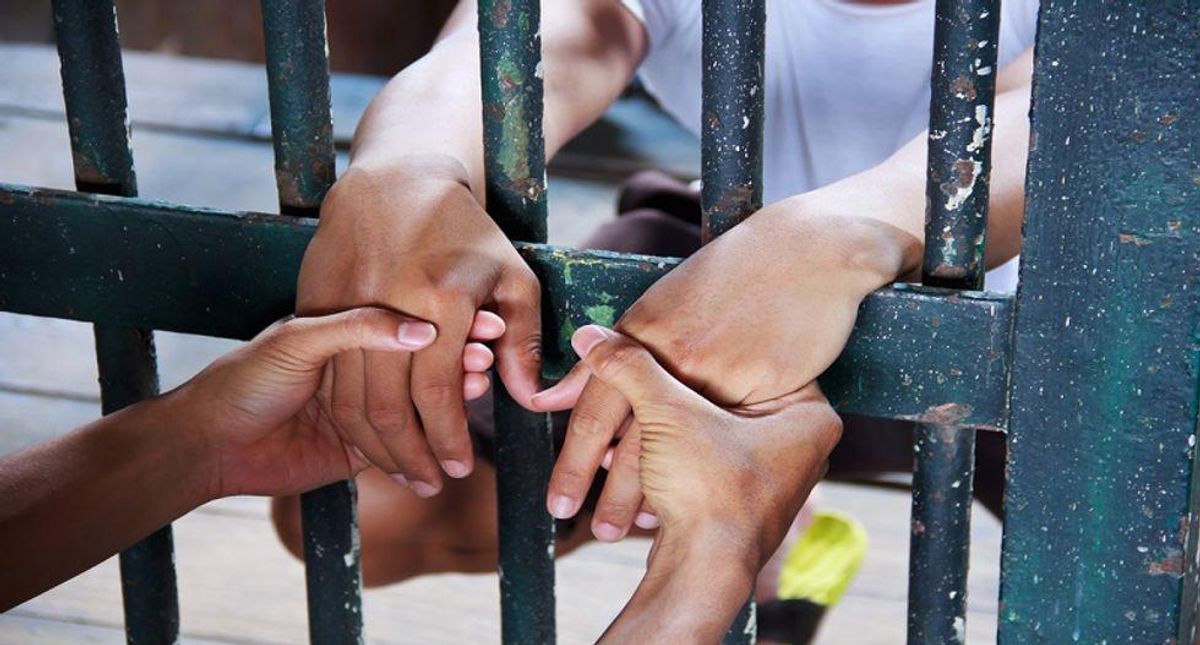 Holding hands through prison bars (Shutter Shock)
"Dozens who died in Texas prisons during the pandemic had been granted parole, new report shows" was first published by The Texas Tribune, a nonprofit, nonpartisan media organization that informs Texans — and engages with them — about public policy, politics, government and statewide issues.

Last year, as the coronavirus killed hundreds inside Texas lockups and sickened tens of thousands more, prisoner rights advocates unsuccessfully pleaded for state officials to more quickly release the thousands of people in prison who had already been approved for parole.

Now, a new report shows delays in release have been deadly.

In the first year of the pandemic, 18 people who had already been granted parole died with COVID-19 before they could walk out of prison, according to a report released Thursday from the University of Texas at Austin's Lyndon B. Johnson School of Public Affairs. At least another two dozen parole grantees died in prison from reasons unrelated to the coronavirus in the same period, largely due to chronic health issues.

“While COVID has dramatically exacerbated this problem, the data also tells us that this phenomenon is not unique to the pandemic era," the report stated.

At least 26 people died in prison in 2019 after having been granted parole, according to the report.

In April, about 10,800 people held in Texas prisons had already been approved for parole, according to data from the Texas Department of Criminal Justice, accounting for 9% of the state prison population. More than a quarter of them had been granted parole at least six months earlier, and nearly 900 people had been waiting for more than a year.

The large number of parole grantees in prison is not unusual. At any given time, thousands of people are held in Texas prisons despite having a parole approval in their hands. That's in part because the Texas Board of Pardons and Paroles requires most prisoners to first undergo additional educational or rehabilitative programming before their parole release, which can last from three to 18 months.

Some of the programs are specific to the person's conviction, like addiction and sex offender treatment programs. But many prisoners are assigned to complete a more generic life-skills program that lasts three months. In 2019, less than a quarter of those granted parole were approved for release without delay.

During the pandemic, those classes — and the parolees' releases — were often pushed back. Before March 2020, a person granted parole remained in prison an average of three to four months before being released, according to the report. That average increased to six months in the pandemic, with a typical delay ranging from five to 11 months. Eleven people who died in prison during the pandemic had been approved for parole more than a year earlier, the report found.

One explanation for the delay is that those who required programming that wasn't available at their prisons had to wait months while transfers among units were stopped to limit the virus' spread. And units confirmed to have active infections were locked down, sometimes for a month or more, restricting activity within and halting movement in and out of them. Rehabilitative programming shifted from in-person interactions in a classroom setting to filling out paper packets in the prisoner's dorm or cell.

The threat of the coronavirus and the limited programming inside prompted family members and prisoner advocates to call for parolees to complete any necessary programming outside of prison walls after release. But the parole board said repeatedly it would not change its parole review process during the pandemic. Gov. Greg Abbott, who oversees the board, has maintained a strong message against increased release from lockups, stating in March 2020 that “releasing dangerous criminals in the streets is not the solution" to the virus' threat inside prisons and jails.

For those who had been approved for release on parole, the UT Austin report suggested free-world programming, noting it is already often available in the community for people sentenced to probation. The report also recommended that TDCJ provide prisoners any necessary rehabilitative programming earlier in their sentences, so as not to postpone release once parole has been granted. Michele Deitch, a senior lecturer at the LBJ School and an author of the report, said such a change would require a significant shift in practices within the parole board and TDCJ.

“There's a concept that every expert will tell you, which is that reentry starts on the day of admission to prison," she said. “To adhere to that concept, it makes sense to offer that programming at the start of someone's time that they're incarcerated."

In the Legislature, the Texas House passed a bill this year to require that any necessary prerelease programs be identified by the parole board and made available to prisoners by TDCJ before they become eligible for parole. The bill died, however, after never moving in the Senate.

A spokesperson for the parole board did not respond to questions Tuesday. TDCJ spokesperson Jeremy Desel said the agency provides programming that is mandated by the parole board, and acknowledged the pandemic “absolutely" presented challenges to parole releases. He added that the state has a low rate of people released from prison being reincarcerated within three years.

“The parole system is built to give inmates the highest possible chance to succeed in their reintegration into society," he said. “And the way our parole system works and has been working in Texas is a success story."

Aside from COVID-19, most deaths of those granted parole were due to chronic health conditions, according to the UT report. It says the state pays an estimated $744,722 each day the nearly 10,800 prisoners who were approved for parole in April stay locked up. And costs are much higher for those with chronic medical conditions, as an aging prison population continues to increase prison health care costs. The report recommends immediately releasing those granted parole who are chronically ill.

“It's a problem that is not only a tremendous human toll, but it's got an enormous cost attached to it," Deitch said.

For Kambri Crews, any of the recommended changes in the report could have let her see her father in person before he died in prison custody in July instead of saying goodbye on a hard-fought FaceTime call. Theodore “Cigo" Crews, 73, died in a prison hospital after a late cancer diagnosis, 30 days after he'd been granted parole. He had served 18 years of a 20-year aggravated assault sentence.

“We went through a whole roller coaster of emotions," Kambri Crews said, between learning he was approved for parole and his death. “From elation and fear because of the COVID concerns, and also this crushing feeling of helplessness in knowing that we were going to be caught in the apathetic bureaucracy."

Her father was first required to take a drug and alcohol program, she said, but she didn't understand why he couldn't have taken classes any other time in his nearly two decades behind bars, or take them outside with her had he been released.

“He's a prime example of someone who needed therapy and [Alcoholics Anonymous] and domestic violence training before he got released," she acknowledged. “But he'd been in prison for 18 years, so what was that time for?"

This article originally appeared in The Texas Tribune at https://www.texastribune.org/2021/06/17/texas-prisons-parole-coronavirus/.