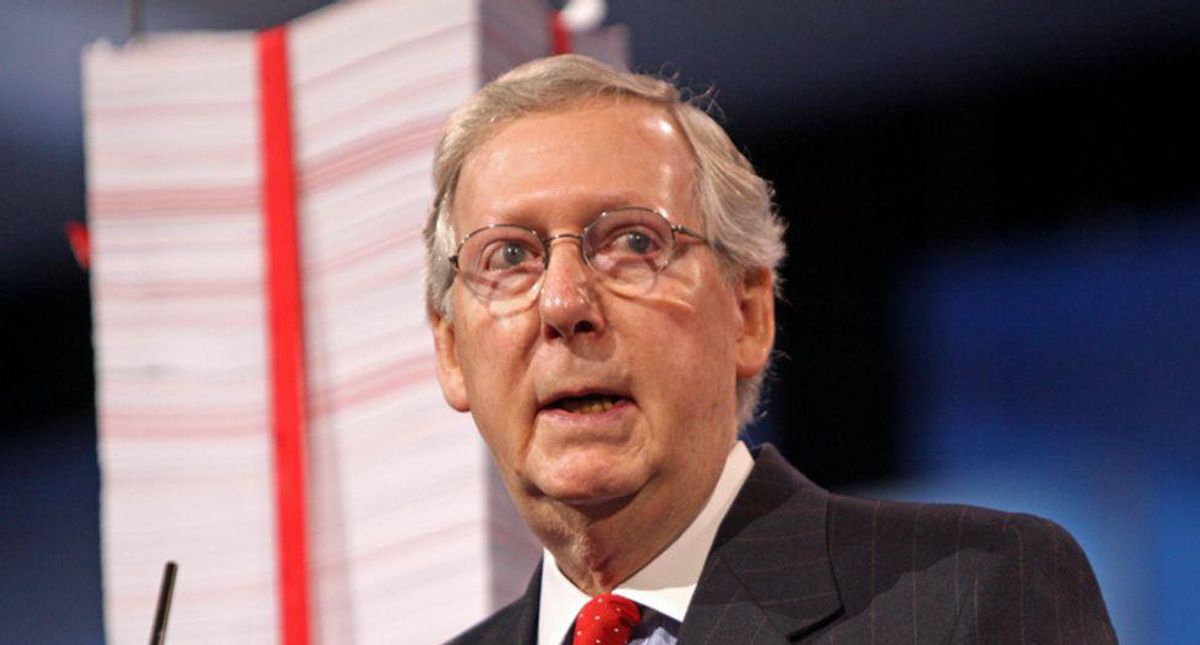 Authoritarian Trump followers within the GOP are actively promoting death and disease among Americans to win elections. The brutality and cynicism is breathtaking.

As we saw yesterday, Rand Paul and several of his Republican colleagues in the Senate, grilling Dr. Fauci, did their best to advance one of the GOP's two major 2022/2024 election strategies.

The first of those strategies, of course, is to replace actual election officials with Republican hacks so they can throw out the votes they don't like and simply decide elections on their own. That strategy also includes suppressing the vote and stopping people from voting, as GOP Governor Ducey did yesterday, throwing 140,000 voters (including 30,000 Latinos) off the rolls.

As I wrote yesterday, they've passed those laws in several states now and are proposing them in nearly every state in the union, and the only defense American democracy has against them is the For The People Act, which hinges on changing or ending the filibuster.

But the second, and most evil part of their strategy — at least in the context of their total disregard for human life — has to do with the coronavirus.

1. Convince enough Americans not to get vaccinated that the country never reaches herd immunity and President Joe Biden therefore cannot get the virus crisis under control.

2. The failure of Biden to control the virus will mean, like what happened to Trump, that the economy will not get back to full functioning, either.

3. As any first-year Political Science student can tell you, the biggest single variable in most elections, particularly federal elections, is the economy. If Republicans can keep the economy off-balance by keeping the virus circulating, they'll have a much better chance of winning elections in 2022 and particularly in the presidential race in 2024. And if they can use uncertainty about when the coronavirus crisis may end here to crash the stock market, that gets them double bonus points!

This strategy, aggressively supported by right-wing media, requires creating doubt about the virus generally and the vaccines in particular. It's why about half the Republicans in Congress refuse to say whether they've been vaccinated or not, and why Trump and his wife took their shots in secret before they left the White House.

Tucker Carlson has been "asking questions" about people who died after getting vaccinated, as if the vaccines had anything to do with their deaths (it didn't), echoing similar lies told by America's dumbest senator, Wisconsin's Ron Johnson.

Right-wingers and conspiracy nuts on radio and across the Internet, and bots and trolls from multiple foreign countries filling thousands of Facebook groups, are coming right out and warning people against getting vaccinated.

Their freak-outs include everything from the theory that Bill Gates is putting tracking chips in the vaccines so he can know where you are (presumably these people don't know about cell phones?) to suggestions that mRNA vaccines "alter your DNA" (they don't) and could turn us into zombies, mutants, or even make us all liberals.

In yesterday's hearing, more than one Republican senator tried to produce a clip worthy of getting themselves on Fox News by suggesting that people who have had the coronavirus don't need to get vaccinated because they are "already immune."

Fauci has already shot that one down; people who had the "wild" variety of coronavirus earlier in the year can still get just as sick or even die from the South African variant, which is spreading across the United States right now, and because the Indian variant contains some of the same mutations presumably it can also infect and kill people who have already had the "wild" first-generation coronavirus.

The vaccines, however, actually produce an immunity to all of these variants that's stronger than the natural immunity of having had coronavirus in its original form. None of that actual science, however, mattered to the Republicans speaking yesterday.

Rand Paul, for his part, tried his best to promote the idea that somehow Fauci was in on an evil plot years ago to send money to China to develop a weaponized coronavirus that they would then unleash on the world like, you know, a year ago.

It's a classic example of how a grain of truth can be turned into a sand castle of lies.

It's true that governments, including China and the United States, have been engaged in biological warfare experiments for decades, which includes weaponizing viruses. When anthrax (a bacterium) was mailed to leading Democrats and news media after 9/11 just in time to promote passage of the PATRIOT Act, it was traced back to a US weapons lab, for example.

What's not true, however, and what Rand Paul was trying to get people to believe is that labs doing basic virology research, including the lab in Wuhan, are not only involved in this kind of research but are intentionally responsible for the pandemic.

There's a remote possibility that some part of his hypothesis is correct — the part about the Covid virus escaping from the lab in Wuhan — but nobody knows for sure at this point in time and it's considered extremely unlikely by most credible sources. Even if true, though, it has nothing to do with Paul's questioning.

Because that wasn't the point he was trying to make: what Rand Paul was trying to do is discredit Dr. Anthony Fauci and the entire public health team surrounding President Biden, so Americans will not believe what they say and therefore won't get vaccinated.

Which takes us back to the second of the two Republican election strategies: keep the virus circulating in America; thus keeping the US economy in chaos; then run ads complaining about the "bad Democrat economy" and use that to win elections in 2022 and 2024.

The raw brutality of this election strategy is extraordinary.

The number of new coronavirus infections in the United States has now dropped below 30,000 a day, and the number of deaths is consistently well below the 400-a-day mark. This is a huge contrast to the time when Donald Trump was pushing people back into the workplace to get re-elected and we were seeing hundreds of thousands of people infected and thousands dying every day.

No matter how hard Rand Paul and his Republican colleagues try, enough of us are vaccinated now that they won't get America back to those kinds of terrible numbers. But they think they can get the numbers to stay high enough that the economy will remain in crisis and Republicans can use it as a wedge issue.

And they don't care how many Americans die to get them there.