Australian scientists are making strides towards solving one of the greatest mysteries of the universe: the nature of invisible “dark matter”.

ORGAN has placed new limits on the possible characteristics of axions and thus helped narrow the search for them. But before we get ahead of ourselves …

Let’s start with a story

About 14 billion years ago, all the little pieces of matter – the fundamental particles that would later become you, the planet and the galaxy – were compressed into one very dense, hot region.

Then the Big Bang happened and everything flew apart. The particles combined into atoms, which eventually clumped together to make stars, which exploded and created all kinds of exotic matter.

After a few billion years came Earth, which was eventually crawling with little things called humans. Cool story, right? Turns out it’s not the whole story; it’s not even half.

People, planets, stars and galaxies are all made of “regular matter”. But we know regular matter makes up just one-sixth of all the matter in the universe.

The rest is made of what we call “dark matter”. Its name tells you almost everything we know about it. It doesn’t emit light (so we call it “dark”) and it has mass (so we call it “matter”).

If it’s invisible, how do we know it’s there?

When we observe the way things move in space, we find time and again that we can’t explain our observations if we consider only what we can see.

Spinning galaxies are a great example. Most galaxies spin at speeds that can’t be explained by the gravitational pull from visible matter alone.

So there must be dark matter in these galaxies, providing extra gravity and allowing them to spin faster – without parts being flung off into space. We think dark matter literally holds galaxies together. 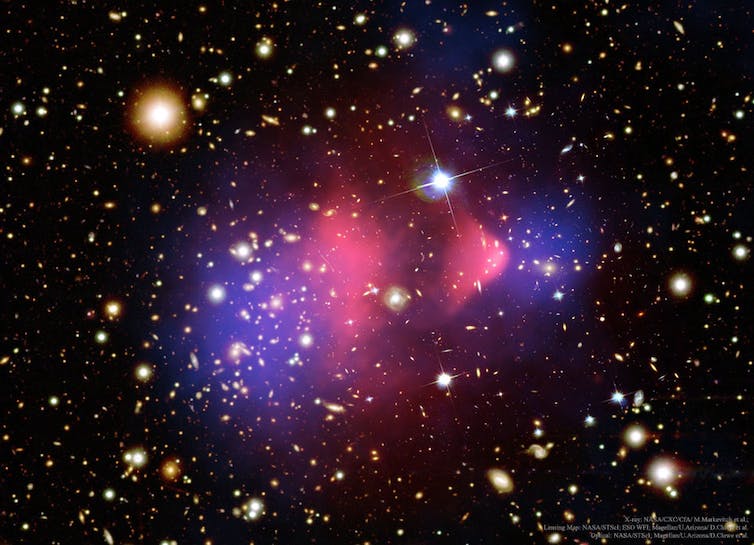 The ‘Bullet Cluster’ is a massive cluster of galaxies which has been interpreted as being strong evidence for the existence of dark matter.

So there must be an enormous amount of dark matter in the universe, pulling on all the things we can see. It’s passing through you, too, like some kind of cosmic ghost. You just can’t feel it.

How could we detect it?

Many scientists believe dark matter could be composed of hypothetical particles called axions. Axions were originally proposed as part of a solution to another major problem in particle physics called the “strong CP problem” (which we could write a whole article about).

Anyway, after the axion was proposed, scientists realised the particle could also make up dark matter under certain conditions. That’s because axions are expected to have very weak interactions with regular matter, but still have some mass: the two conditions needed for dark matter.

So how do you go about searching for axions?

Well, since dark matter is thought to be all around us, we can build detectors right here on Earth. And, luckily, the theory that predicts axions also predicts that axions can convert into photons (particles of light) under the right conditions.

This is good news, because we’re great at detecting photons. And this is exactly what ORGAN does. It engineers the correct conditions for axion–photon conversion and looks for weak photon signals – little flashes of light generated by dark matter passing through the detector.

This kind of experiment is called an axion haloscope and was first proposed in the 1980s. There are a few in the world today, each one slightly different in important ways. 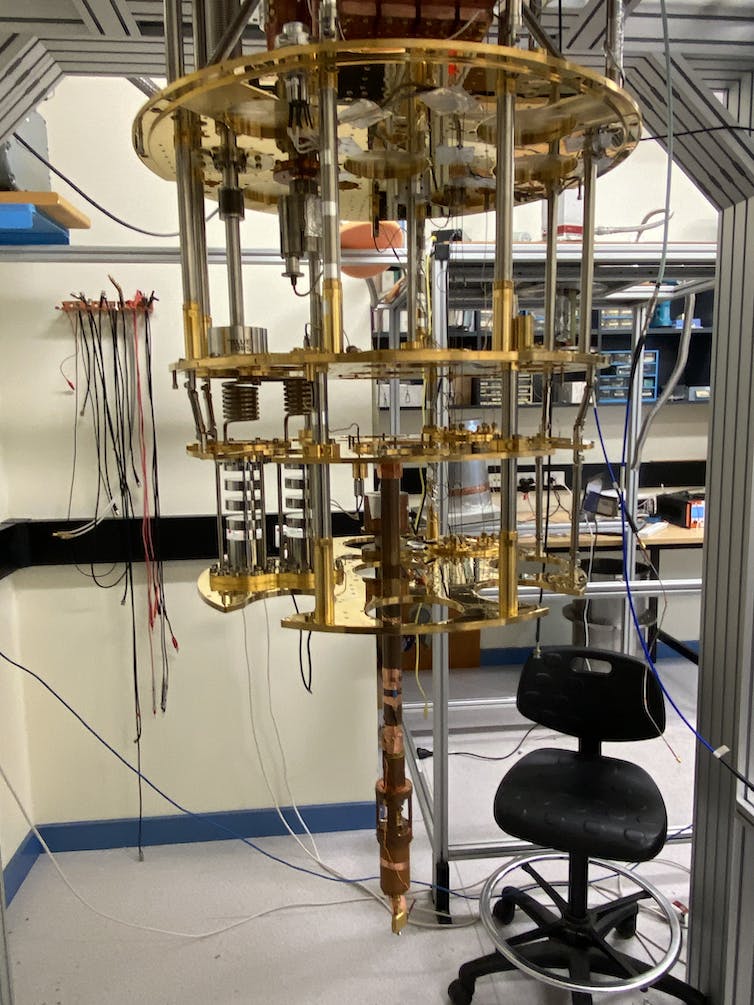 The ORGAN Experiment’s main detector. A small copper cylinder called a ‘resonant cavity’ traps photons generated during dark matter conversion. The cylinder is bolted to a ‘dilution refrigerator’ which cools the experiment to very low temperatures.

Shining a light on dark matter

An axion is believed to convert into a photon in the presence of a strong magnetic field. In a typical haloscope, we generate this magnetic field using a big electromagnet called a “superconducting solenoid”.

Inside the magnetic field we place one or several hollow chambers of metal, which are meant to trap the photons and cause them to bounce around inside, making them easier to detect.

However, there is one hiccup. Everything that has a temperature constantly emits small random flashes of light (which is why thermal imaging cameras work). These random emissions, or “noise”, make it harder to detect the faint dark matter signals we’re looking for.

To work around this, we’ve placed our resonator in a “dilution refrigerator”. This fancy fridge cools the experiment to cryogenic temperatures, about −273°C, which greatly reduces the noise.

The colder the experiment is, the better we can “listen” for faint photons produced during dark matter conversion.

An axion of a certain mass will convert into a photon of a certain frequency, or colour. But since the mass of axions is unknown, experiments must target their search to different regions, focusing on those where dark matter is considered more likely to exist.

If no dark matter signal is found, then either the experiment is not sensitive enough to hear the signal above the noise, or there’s no dark matter in the corresponding axion mass region.

When this happens, we set an “exclusion limit” – which is just a way of saying “we didn’t find any dark matter in this mass range, to this level of sensitivity”. This tells the rest of the dark matter research community to direct their searches elsewhere.

ORGAN is the most sensitive experiment in its targeted frequency range. Its recent run detected no dark matter signals. This result has set an important exclusion limit on the possible characteristics of axions.

This is the first phase of a multi-year plan to search for axions. We’re currently preparing the next experiment, which will be more sensitive and target a new, as-yet-unexplored mass range.

But why does dark matter matter?

Well, for one, we know from history that when we invest in fundamental physics, we end up developing important technologies. For instance, all modern computing relies on our understanding of quantum mechanics.

We never would have discovered electricity, or radio waves, if we didn’t pursue things that, at the time, appeared to be strange physical phenomena beyond our understanding. Dark matter is the same.

Consider everything humans have accomplished by understanding just one-sixth of the matter in the universe – and imagine what we could do if we unlocked the rest.

Trump was concerned Ivanka would have to wear a burka if they invited the Taliban to Camp David: new book

One of the more surprising scandals in the final years of Donald Trump's administration was his agreement with the Taliban to withdraw from Afghanistan. The agreement outlined specific dates and timelines. It was going to be a big, photogenic ceremony, New York Times reporter Maggie Haberman wrote in her new book "Confidence Man."

"To facilitate a permanent withdrawal of American troops from Afghanistan, Trump’s secretary of state, Mike Pompeo, had pursued a peace agreement with the country’s Taliban insurgency," the book described.