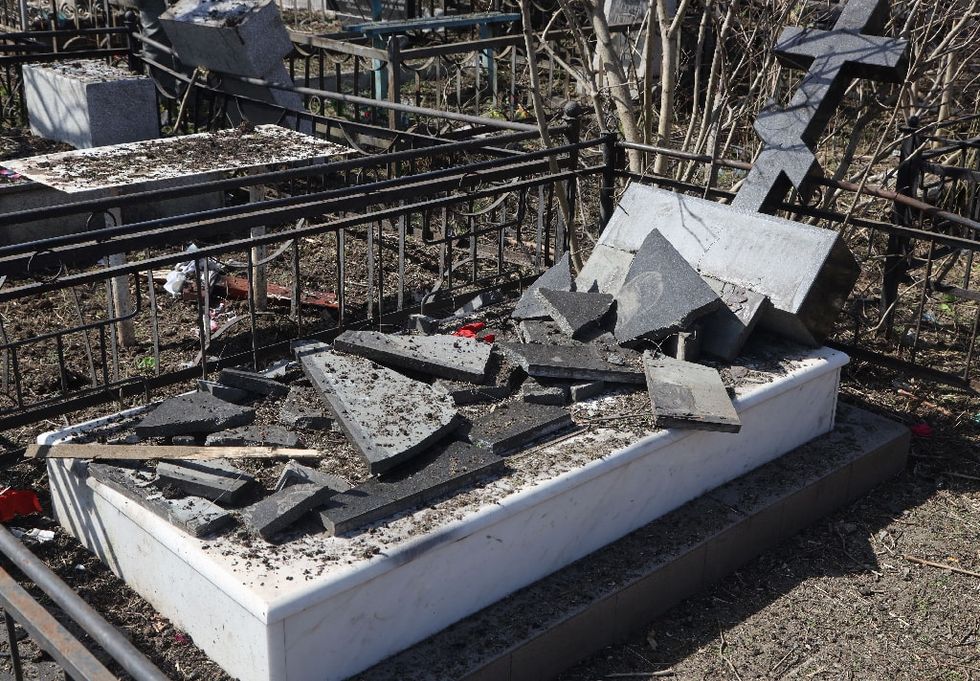 A photograph taken on April 24, 2022, shows a damaged grave in a cemetery in the historic Ukrainian city of Odessa, which reportedly was hit a day earlier by a Russian missile

Kyiv (Ukraine) (AFP) - The United States' top diplomat and defence chief were in Kyiv Sunday, Ukraine's presidency said, making the first high-level visit by US officials since Russia invaded its neighbour two months ago, as fierce fighting cast a shadow over Orthodox Easter.

The trip by Secretary of State Antony Blinken and Defence Secretary Lloyd Austin comes as the war enters its third month, with thousands dead and millions displaced, and as Kyiv desperately sought relief for Ukrainians trapped in the battered city of Mariupol.

Presidential advisor Oleksiy Arestovych said Ukrainian leader Volodymyr Zelensky met with the US officials Sunday, as Mariupol's defences were "already on the brink of collapse" and Ukraine was in dire need of offensive weapons.

"As long as there are no 'offensives', there will be a new Bucha every day," he said in an interview on a Russian former lawyer's popular YouTube channel, referring to the town where UN officials said they had documented the unlawful killings of around 50 civilians.

"Maybe they can help," Arestovych added of the US envoys. "They wouldn't come here, if they weren't ready to give (weapons)."

While the visit remained unconfirmed by Washington and details were kept under wraps, Zelensky tweeted later Sunday that the "Ukraine-US friendship and partnership are stronger than ever!"

The United States has been a leading donor of finance and weaponry to Ukraine and a key sponsor of sanctions targeting Russia, but had not sent any top officials to Kyiv, while several European leaders had travelled there to underscore their support.

"Our souls are filled with fierce hatred for the invaders and all that they have done," Zelensky said in a statement marking the holiday. "Don't let rage destroy us from within."

As Ukrainians marked a sombre Easter, with many braving bombardment for blessings, Russian forces showed no sign of easing their attacks.

The day before, a missile strike on the southern city of Odessa left eight dead and at least 18 wounded, according to Zelensky, who said five missiles hit the historic city.

"Among those killed was a three-month-old baby girl," Zelensky said. "How did she threaten Russia? It seems that killing children is just a new national idea of the Russian Federation."

Russia's defence ministry said it had targeted a major depot stocking foreign weapons near Odessa, attacks that upended the relative calm the city has enjoyed since the war began.

Zelensky accused Russia of being a terrorist state, one that has devastated the port city of Mariupol with weeks of unrelenting bombardment.

"We invited Russians to hold a special round of talks on the spot, right next to the walls of Azovstal," the last Ukrainian stronghold in the strategic port, said Arestovych.

There was no immediate response from Russia. Its president, Vladimir Putin, had ordered his forces not to assault the plant, but Ukrainians say the attacks continue unabated.

'Pause to save lives'

On Sunday, the United Nations' Ukraine crisis coordinator Amin Awad called for an "immediate stop" to fighting in Mariupol to allow trapped civilians to leave.

"The lives of tens of thousands, including women, children and older people, are at stake in Mariupol," Awad said in a statement.

"We need a pause in fighting right now to save lives."

The call came a day after the latest attempt to evacuate civilians from Mariupol failed.

In a message posted on social media Sunday, Sviatoslav Palamar -- deputy commander of the far-right Azov Regiment, which is sheltering in a warren of tunnels under the steel plant -- said Russian forces continued to rain down fire on Azovstal.

"The enemy continues air strikes, artillery from the sea... enemy tanks continue to strike and infantry is trying to storm," said Palamar.

Mariupol, which the Kremlin claims to have "liberated", is pivotal to Russia's war plans to forge a land bridge to Russian-occupied Crimea -- and possibly beyond, as far as Moldova.

The latest fighting followed an announcement earlier this week from a senior Russian military officer who said Moscow aimed to take full control over the eastern Donbas region and southern Ukraine.

Amid the calls to halt the fighting in Mariupol, the Organisation for Security and Cooperation in Europe (OSCE) said it was "extremely concerned" after a number of its Ukrainian members were believed to have been arrested in pro-Russian separatist territories in the country's east.

More than five million Ukrainians have fled the country, and millions of others have been displaced internally, officials say.

In the western city of Lviv, 32-year-old Tetiana Kasian -- who had fled Mariupol -- stopped to solemnly take in a wall of flowers memorialising the dead.

"I never thought that it would happen in Ukraine in the 21st century," she said quietly. "I don't know if I will see my parents" again.

Even as fighting raged on, Ukrainians took time to observe a solemn Easter.

Under the rain at a frontline position in the eastern town of Lyman, soldiers traded the usual patriotic salutation of "Glory to Ukraine!" for a cry of "Christ has risen!"

Around 50 civilians gathered in the town's small Orthodox church. Artillery fire could be heard as they prayed.

"If we make the wrong choices, then darkness will ruin us, as darkness is destroying us during this war," the priest said in his sermon.

Elsewhere on the frontline, in the eastern city of Severodonetsk, Ukrainian troops had hidden their small stock of supplies, including Easter treats, under a bridge after Russian mortar rounds struck overnight.

Next to the Kalashnikovs were Coke bottles and cereal bars, as well as icing-covered Easter breads sprinkled with colourful sugar beads.

While others have fled the battered country, some Ukrainians have stayed in place -- either bound to the land, too old or ill to travel, or simply lacking other options.

"I must work," farmer Vassili Kushch, 63, said in the village of Mala Tokmachka in southern Ukraine, standing near rubble left by a bomb. "I don't have anywhere else to go."