Trump has suffered a stunning drop in approval among Republican voters

John A. Tures
Donald Trump speaks to a large crowd at "An Address to Young America" an event hosted by Students for Trump and Turning Point Action. (Nuno21 / Shutterstock.com)

A poll after the violent events at the U.S. Capitol shows that Donald Trump is still the GOP frontrunner for the 2024 election, with 40 percent of the vote. But in reality, it demonstrates how much support he's lost in the Republican Party, in such a short time frame. It's hard to believe that just a year ago, he had a 90 percent approval rating among Republicans.

On January 6, 2020, Donald Trump was the darling of the Republican Party. As The Hill reported "President Trump's approval rating has hit a record high among his supporters in the latest Hill-HarrisX poll released on Monday. Of those surveyed, 90 percent of Republicans said they approve of Trump's job performance, compared to just 10 percent who did not have a favorable view of the president. That is the highest favorable rating among Republicans in the Hill-HarrisX poll since it began asking the question in 2018."

At that time, Trump was grappling with questions about the killing of an Iranian General in Iraq, and dealing with a U.S. Senate trial after the House Impeachment in the wake of his phone call to Ukraine. Overall, his approval rating in the country was 47 percent (down a pair of points).

Even after the 2020 Election, failed legal challenges and a laser-like focus on overturning the results, at the expense of fighting COVID-19 and saving the economy, Trump still remained the preferred choice of the GOP faithful for 2024.

According to ex-Democratic Party strategist and White House adviser Dick Morris, Trump was a lock to win the GOP nomination in 2024, in an end of 2020 interview with Newsmax. "Pointing to a Gallup poll published earlier in the day that showed Trump as the most admired man in America, which followed a Rasmussen survey Monday that found 72% of Republicans wanted the party to be more like the president, Morris said he was a virtual shoo-in," according to WMAL.

When it came to matching up with other Republicans, the New York Post revealed that Trump would win the 2024 nomination, according to a November 24, 2020 poll by Politico and Morning Consult. "A survey of 765 GOP voters, released Tuesday by Politico and Morning Consult, found Trump with 53 percent support — vastly ahead of potential GOP competitors. Vice President Mike Pence was the preference of 12 percent of Republicans and Trump's eldest son and campaign surrogate Donald Trump Jr. came in third with 8 percent." The same November poll showed Trump with a 43% approval rating overall, and a 56% disapproval rating. 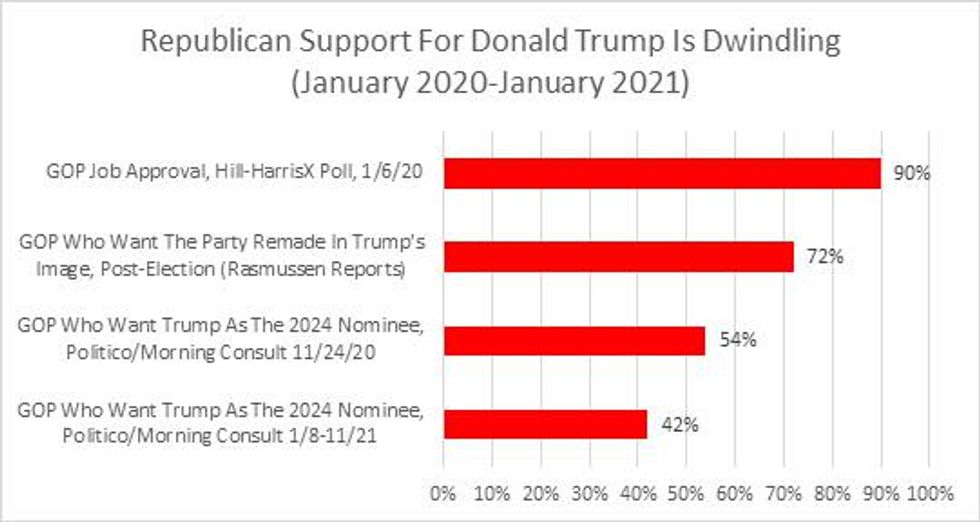 But after giving a politically-charged speech before the deadly attack on the U.S. Capitol, it's clear that Donald Trump's approval among Republicans continues to crater. "Forty-two percent of GOP voters said in a new Morning Consult/Politico survey that they would vote for Trump if the 2024 Republican presidential primary were held today, down 12 percentage points from a Nov. 21-23 poll. The latest poll was conducted Jan. 8-11 among 595 Republican voters, with a 4-point margin of error."

Of course, job approval is different from picking your new nominee. Even still, that 2021 poll showed Trump with 75% job approval rating, the second lowest of his career, and a big decline over a year. There wasn't a 2024 GOP nominee poll from January 2020 for comparison, but it's clear that the Trump has become toxic to many Republicans, including leading members of the House and Senate as well as voters. And with only 34% approval overall with the public in that Politico/Morning Consult poll, Trump would be a good bet to lose the next election by an even bigger margin, even if he actually is the Republican nominee that year.

John A. Tures is a professor of political science at LaGrange College in LaGrange, Georgia. He can be reached at jtures@lagrange.edu. His Twitter account is JohnTures2.