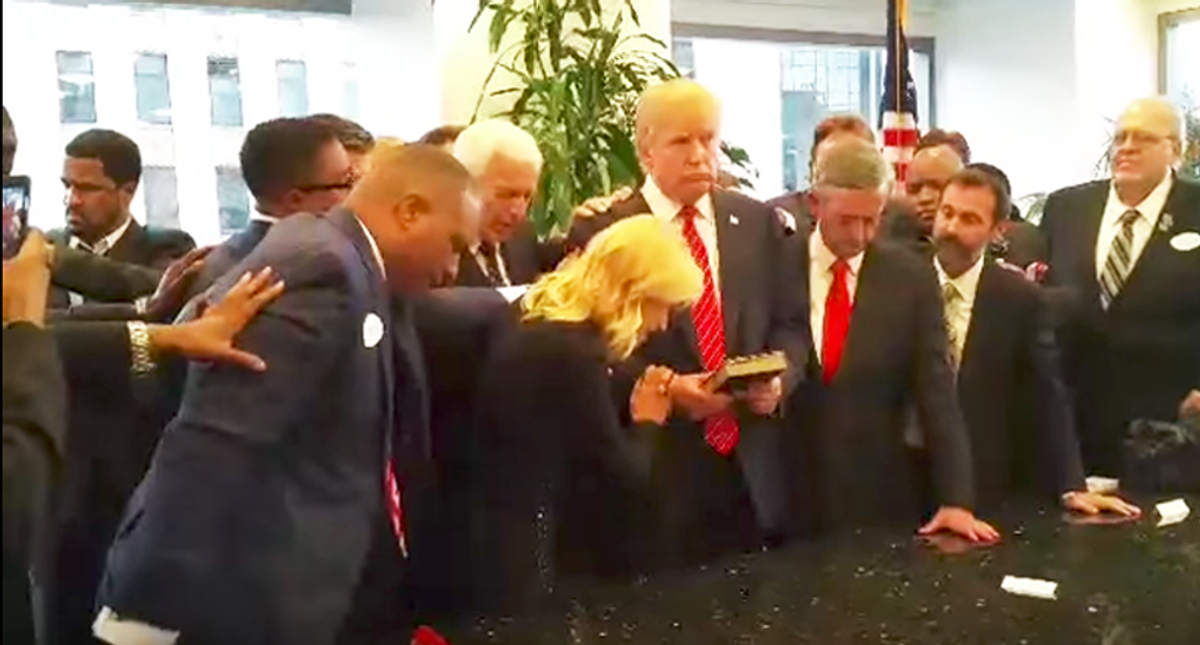 In the wake of the Pew Research Center's findings that 84 percent of the white evangelical Protestant vote went to former President Donald Trump in 2020, it is more important than ever for the American public to face the uncomfortable truth about the authoritarian Christian right's deleterious impact on society, culture and politics.

Some of us have been pushing for this conversation for years, with various iterations of relevant data and scholarship helping to elucidate key points. During the 2016 primaries, a few political scientists drew attention to a link between authoritarian personality traits and support for Trump. For Religion Dispatches, I wrote at the time, "if 'a desire for order and a fear of outsiders' predicts Trump support, the question of why white evangelicals are backing a trash-talking billionaire can be easily answered."

Although the mainstream press has only haltingly begun to take such analysis seriously, my conclusion, which was intuitive to me as someone who grew up in white evangelical subculture and attended Christian schools, aged well over the next few years, as the rubric of "Christian nationalism" became an important part of the relevant discourse. No one should have been surprised by evangelical Trump support, and that the American public has done such a poor job of grappling with the issue is a sad commentary on the fundamental weakness of American civil society.

One of the key roots of that weakness is the tendency of TV news and the legacy press to present "both sides" of any issue that can be framed as partisan. The right has long since learned to exploit this tendency by using manufactured "controversies"—where there is no serious controversy among experts in the relevant fields—to shift the Overton window in, for example, areas such as climate change. While a strong argument that American polarization is "asymmetric," and driven primarily from the right, has been available, this understanding has done little to improve the situation.

Could the national discussion of right-wing, white Christians as a distinct authoritarian "faction" that transcends party help us to escape from the trap of bothsidesism? Lilliana Mason, associate professor of government and politics at the University of Maryland, seemed to suggest as much in a recent Twitter thread exploring some of the implications of a new paper she and colleagues Julie Wronski and John V. Kane recently published in American Political Science Review.

The main finding of the paper, "Activating Animus: The Uniquely Social Roots of Trump Support," is that support for the former president was driven primarily by negative feelings toward discrete social groups primarily associated with the Democratic Party: African Americans, Hispanics, Muslims, and gays and lesbians.

Using a 2011 baseline that could be checked against later voting preferences, the authors show that animosity toward marginalized groups increased Trump support regardless of party affiliation, with a particularly strong effect among independents (a 30-percentage-point shift in Trump's favor vs. a 15-percentage-point shift among both Republicans and Democrats). The effect does not hold for other Republican leaders or the Republican Party in general. The authors found no similar effect of animosity toward groups primarily associated with Republicans—whites and Christians—on support for the Democratic Party. Thus, as the authors put it:

The observed relationship between group animosity and Trump support is neither an artifact of his serving as a de facto party leader nor a phenomenon that manifests symmetrically across candidates in the 2016 presidential campaign.

Rather, it appears that Trump support is uniquely drawn from animosity toward social groups linked with the out-party, whereas most other elites' political support is unrelated to these kinds of sentiments.

It would therefore be incorrect to "explain Trump's appeal with partisanship alone." These conclusions seem to be the basis of Mason's Twitter thread, in which she contends, "More than 'polarization,' we need to worry about the very real threat posed by an anti-democratic group that has always existed in the electorate, and [that] has taken control of parties to cover for their explicitly anti-democratic aims."

It is certainly true that this white Christian faction identified by Mason and her colleagues exists throughout American history not only as a bastion of white supremacist patriarchy, but also as something distinct from the political parties with which it may be aligned at any given time. It is not clear to me, however, that simply pointing out that American racists used to be mostly Democrats, but are now mostly Republicans, can do much to change the public discourse. After all, appeals to seemingly moderate Republicans to show "spine" or "conscience" in recent years have yielded precious few results in this post-2010 gerrymandering environment that has allowed the Tea Party and the Christian right to control the GOP. To be sure, the concentration of authoritarians in one of two major parties in a two-party system is a serious problem, but there is no simple way to dislodge the authoritarians from their power over the current Republican Party, which is more white and male than ever.

That being said, I wholly agree with Mason's contention that we need to talk about white right-wing Christians as the core of anti-pluralist, anti-democratic America. I'm not sure, however, that trying to make the case that doing so is "non-partisan" will have much impact when, despite the findings of Mason and her colleagues, the faction in question currently defines the GOP. Whether this argument will convince media gatekeepers, there's also still the issue of Christian supremacy, and the concomitant de facto taboo on subjecting Christian demographics to social criticism, to overcome.

Despite the challenges, I think it makes sense for American liberals and leftists, and for all Americans who support democracy and human rights, to push both these narratives. And they are more likely to have an impact the more they can be associated with relatable human faces and stories. I have worked over the last few years to elevate the voices of "exvangelicals" and the nonreligious to argue that we should be considered stakeholders in discussions of evangelicalism and the Christian right—as should anyone directly affected by their politics. This approach has yielded some results, and I believe it has legs, inasmuch as stories have power. The stories of those who have left the Republican Party because of the authoritarian faction's control may also be mobilized to change the national conversation, which is indeed a crucial part of the long game in politics. Whether it will be enough to avoid a long period of minority authoritarian rule by our racist, anti-democratic faction, however, is far from certain.