Reports spread on Monday afternoon that the White House doesn't keep visitor logs for the private homes of presidents like President Joe Biden. The same is true for former Presidents George W. Bush, Bill Clinton and all of those that came before them. The one discrepancy, however, appears to be the revelation from former President Donald Trump that he has those logs.

Politico confirmed that there are no Secret Service logs of visitors to Mar-a-ago, despite Trump calling it "The Winter White House."

Taking to his social media account to attack Biden, Trump posted, " Mar-a-Lago is a highly secured facility, with Security Cameras all over the place, and watched over by staff & our great Secret Service. I have INFO on everyone!" 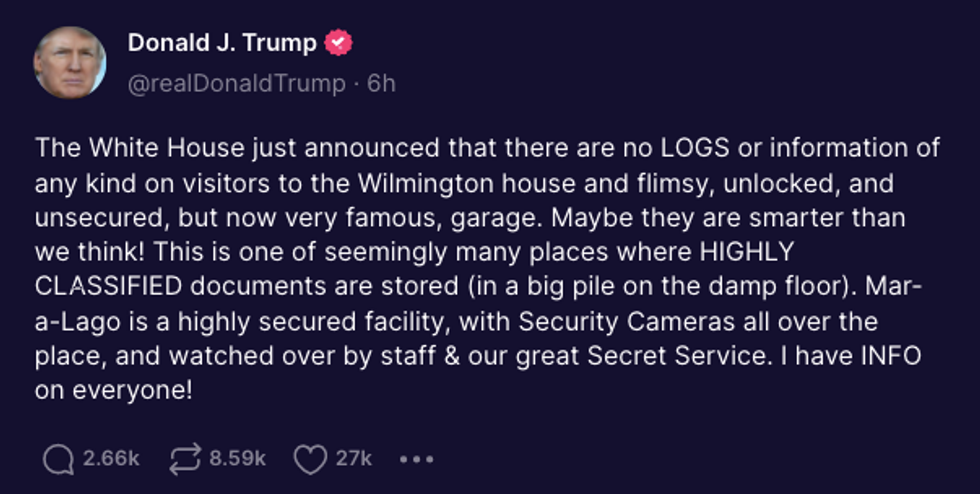 Trump reveals he has visitor information "on everyone"Photo: Screen capture

The Secret Service called this a lie, though not directly.

“The...search and review of records confirmed that there is no system for keeping track of Presidential visitors at Mar-a-Lago, as there is at the White House Complex,” wrote Special Agent Kim Campbell, head of the Secret Service’s Liaison Divison. “Specifically, it was determined that there is no grouping, listing or set of records that would reflect Presidential visitors to Mar-a-Lago.”

It's unclear who is telling the truth or if Trump is saying that while the Secret Service didn't keep logs, he personally did through his country club's records.

It begs the question of whether that information has been subpoenaed by the Justice Department as part of their ongoing investigations into the theft of documents from the White House in 2021.

"Like every President in decades of modern history, his personal residence is personal," the White House Counsel's Office said in a statement about Biden. "But upon taking office, President Biden restored the norm and tradition of keeping White House visitors logs, including publishing them regularly, after the previous administration ended them."

Trump refused to keep logs for the White House, but if there were logs kept of Mar-a-Lago while he was president at the "Winter White House," those should technically be part of the National Archives information, and they should be subject to a Freedom of Information Act request.

University of Alabama Law School Professor Joyce White Vance noted that the "GOP leaders who demand that visitor logs be released for Biden are the same people who tolerated the Trump WH’s refusal to release logs while he was in office, let alone for Mar-a-Lago. That's politics, not justice & needs to be called out."

She went on to urge folks to question the hypocrisy and the discrepancy.

Legal expert Allison Gill echoed the same sentiment, saying that Democrats should demand the Mar-a-Lago logs, the Trump Tower visitor logs, the Bedminister Visitor logs and the visitor logs for the public storage shed in West Palm Beach where additional classified [paper] was found. While tongue and cheek, if Trump has that information "on everyone" then it might be helpful for law enforcement investigating the Trump documents scandal.