Donald Trump's last stand: How his desperate attempt to overturn the election failed 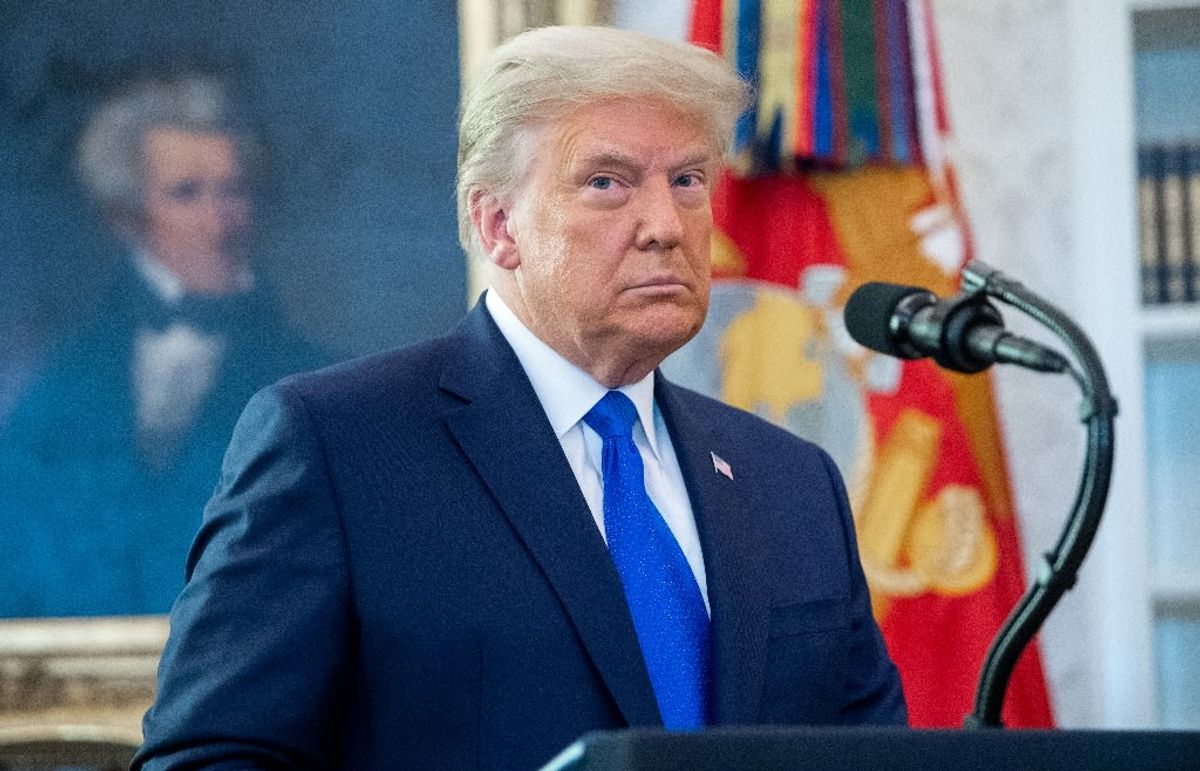 Many things have confounded me about Donald Trump over the last five years, but perhaps most confounding has been the spectacle of so many Republicans cowering and shivering in fear of his almighty tweets. I simply could not understand why they were so afraid of him. Yeah, I read all of the analysis pointing to the likelihood that if Republicans didn't go along with Trump's every little whim, he would insure they were "primaried" the next time they came up for election. They were in fear for their political careers, it was said. I got it. I've watched many men during my lifetime exhibit abject cowardice in the face of nothing more fearsome than an unreasonable asshole of a boss. Some of them had wives and kids and mortgages and didn't want to lose their jobs. Others simply got comfortable where and were willing to put up with crap from their superiors so they could stay put. So it's understandable, if hardly commendable, that so many Republicans lived in dread of the fearsome Tweeter in Chief.

I waited in vain for some Republican, any Republican to stand up to him. In the end, it took losing re-election for Trump to appear wounded enough that Republicans, or at least a few of them, began to show some backbone. After he was beaten and on the ground, a few of them finally decided it was safe to give him a few kicks.

This week, Democratic House managers described Trump's campaign to intimidate Republicans around the country into helping him overturn the election.. They showed how a few of them stood up to him, as if suggesting to the senators in his party that they could risk his wrath and survive, too.

Trump fired his first shot at the courts. His campaign, and outside forces friendly to him, filed no fewer than 61 lawsuits aimed at overturning the presidential election in Arizona, Wisconsin, Michigan, Pennsylvania and Georgia. When he began to lose the lawsuits one by one, Trump ramped up his tweeting, trying to intimidate the judges, some of whom were Republican appointees, who consistently and repeatedly ruled against him. He turned loose his house hit man, Rudy Giuliani, in appearances such as the notorious Four Seasons Total Landscaping press conference, and in hearings held by rogue legislative committees in Michigan and elsewhere, trying to intimidate the local judges who were hearing his cases. When his campaign of intimidation didn't work, he simply ignored adverse rulings and filed new cases in the same states — in different jurisdictions, and based on marginally different claims. When he had lost 60 of the 61 cases, he sent his lawyers directly to the U.S. Supreme Court, which he apparently thought was bought and paid for. When the Supreme Court slapped him down in two or three sentences, he erupted in rage.

His rage at the courts, he hoped, would intimidate Republican secretaries of state and Republican leaders in state legislatures. Trump began tweeting directly at some of them, mentioning Georgia Secretary of State Brad Raffensberger by name and calling him 18 times before he finally got him on the phone. Trump invited the leaders of Michigan and Pennsylvania's state legislatures to the White House and tried to talk them into refusing to certify their states' electoral votes and appoint Trump electors in their stead. When Raffensberger and Georgia Gov. Brian Kemp, also a Republican, ignored Trump's entreaties or outright denied them, Trump effectively blackmailed Georgia's two U.S. senators, Kelly Loeffler and David Perdue — both of whom faced tight runoff elections — into calling for Raffensberger and Kemp's resignations. When that didn't work, Trump fired more tweets calling Raffensberger and Kemp RINOs and traitors. Raffensberger and his family began getting death threats and had to be protected by Georgia state police. It shouldn't be shocking, but actually is, that none of the battleground-state officials targeted by Trump yielded to his attempts to intimidate them.

On Dec. 14, the Electoral College met and certified Joe Biden as the winner of the election. Having lost with the courts and the state legislatures, Trump then took his campaign directly to the U.S. Congress, directing his threats and tweets at Republican senators and House members. In a series of rallies, he called Republicans in Congress who weren't going along with his scheme traitors to their party and the country. He mentioned by name senators and congressmen he had campaigned for and called on them to "Stop the Steal," making clear that otherwise he would make sure they'd find themselves out of a job come re-election time.

He turned next to his own Department of Justice, calling on Attorney General Bill Barr to investigate all the election fraud he had been yapping about (but failing to prove) for the past month and a half. In mid-December, Barr announced that "we have not seen fraud on a scale that could have effected a different outcome in the election." Trump called him to the White House and screamed at him in anger. House managers reported during the impeachment trial this week that Barr responded by "towering over Trump in the private White House dining room" and calling his charges of fraud "bullshit."

Barr quit just before Christmas, and then Trump went after the deputy attorney general who had replaced him, Jeffrey Rosen. He called Rosen into the Oval Office and tried to get him to order yet another Justice Department investigation of voting fraud. When Rosen refused, Trump threatened to fire him and replace him with a lower-level lackey he had identified in the department who would follow his orders. He kept up his efforts to intimidate Rosen until Jan. 3 when his threats nearly caused a "Sunday Night Massacre," with multiple deputy attorneys general threatening to resign en masse if Rosen was fired. Trump backed down.

It was only three days before the Congress met to certify the Electoral College ballots, and Trump had gotten more and more desperate. Now he turned on his own vice president, Mike Pence. Trump called him into the Oval Office for repeated tongue lashings, trying to get Pence to use his ceremonial role in the certification of electoral ballots to overturn the election by approving challenges to the totals in battleground states and giving those electoral votes to Trump. Pence apparently refused several times, sending Trump to Twitter to punish him with one blast after another, calling him a coward and telling him he'd be remembered as a "pussy" if he didn't do his "duty" to help Trump cheat and overturn the election.

Pence stood up to Trump and was in the middle of overseeing the certification of the electoral votes when Trump sent his mob of looters, racists and militia members to attack the Capitol. More than 140 Republicans in the House and Senate caved to Trump's pressure and objected to the electoral ballots from two states — even after a full day of televised violence — but all the Democrats and the other Republicans in both houses voted them down. In the wee hours of Jan. 7, Vice President Pence and Speaker of the House Pelosi — who only hours before had fled from a mob that wanted to kill them — presided over a joint session in the still-damaged House chamber and announced that Joe Biden had been elected president of the United States.

Trump tried to strong-arm and intimidate every level of government in the United States from the courts to state legislatures to secretaries of state and governors to the Department of Justice to individual congressmen and senators to a final violent attack on the U.S. Capitol itself. He failed. Now he stands accused of inciting an insurrection against the government and the Constitution he had sworn to uphold and protect. The House managers have made their case, step by step, incident by incident, tweet by tweet, threat by threat.

Trump lost the presidency. He failed in his attempt to overturn the election and remain in power. He's a beaten man. Now we'll see how many Republicans in the Senate are willing to recognize the corpse at their feet and finally put him in the ground.