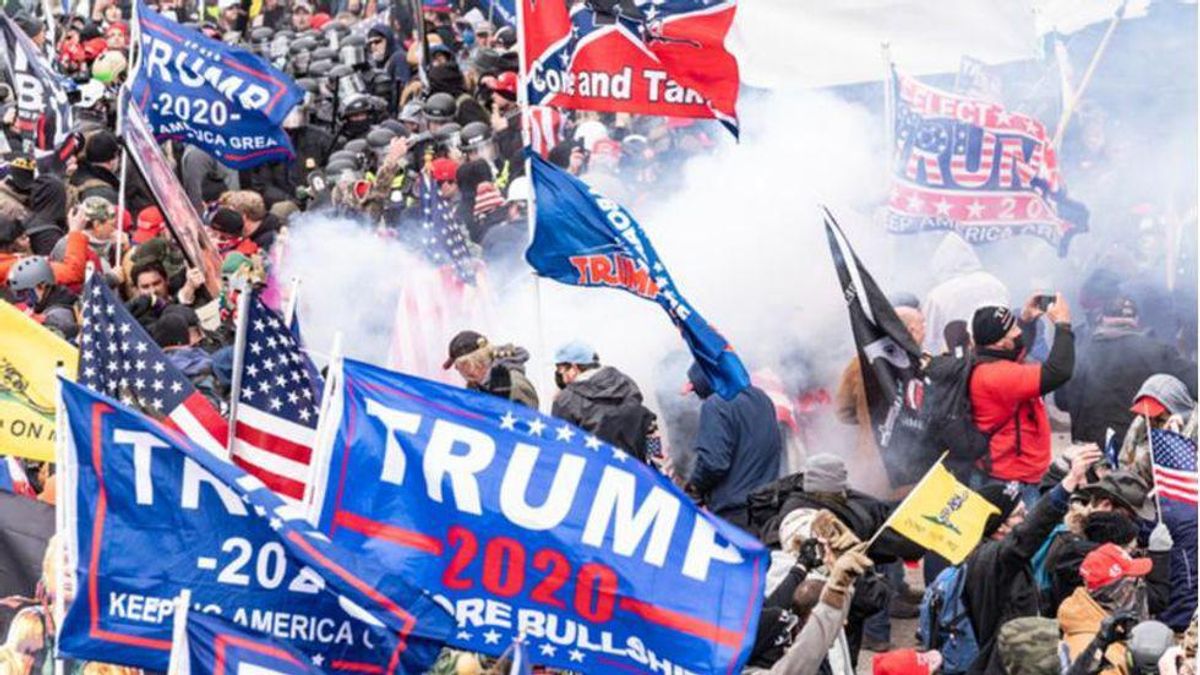 "At approximately 2:30pm, the crowd of violent rioters breached the police line and assaulted multiple officers. Around that time, a SUBJECT can be seen on body-worn camera footage shoving a USCP Officer (Victim 1) to the ground while another rioter grabbed Victim 1's leg. The SUBJECT then appeared to kick Victim 1 as he lay on the ground. Other rioters continued to assault Victim 1.

"Approximately 30 seconds later, the SUBJECT can be seen and heard, still at the front of the crowd, pointing and aggressively shouting, "Get out! Go!" multiple times to the officers. At approximately 2:34pm, as the crowd of violent rioters were advancing further on the Lower West Terrace and cornering USCP and MPD officers, the SUBJECT was at the front of the police line pointing at the officers. A USCP Officer (Victim 2) was standing and holding a police shield as protection. The SUBJECT shoved Victim 2 to the ground. As Victim 2 was still on the ground, the crowd of violent rioters continued to advance and assault other officers."

The FBI identified Mock as the subject, citing photos and videos. There also was ample social-media commentary, courtesy of Mock:

"I went to the Capitol not knowing what to expect but said goodbye to my 4 children not knowing if I was ever going to come home. I was at peace with that knowledge," Mock stated in a January 8 comment. "I held my own and then some when I watched Capitol police beating women and old men. When faced with real men, free men, brave men, they fled with fear and tears in their eyes."

"Teargassed 6 times, pepper sprayed and mustard gassed at the end. But we stayed true to being Patriots, marched to the Capitol and stormed the frontline…no regrets…ashamed of the blue that harmed everyone there to stand for the cause."

One of the witnesses who spoke with the FBI said Mock was a "radical" he feared with take part in violent protest in Minneapolis. He added that Mock "has a criminal history involving guns and seems to be an extremist."

The FBI agent said that Mock, who attended the riot with his girlfriend, indeed had a firearms conviction from a 2009 arrest.