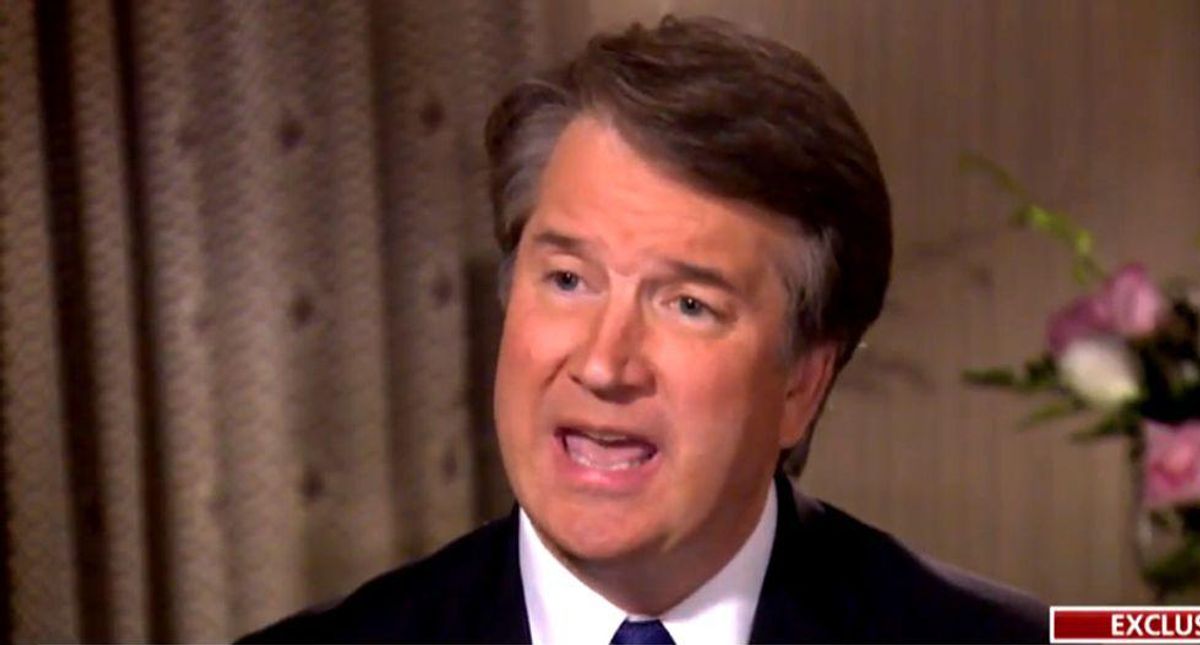 According to "Landslide," Michael Wolff's new book about the final days of the Trump administration, former President Trump is very disappointed in his handpicked Supreme Court justices, particularly Brett Kavanaugh. As Axios reports:

There were so many others I could have appointed, and everyone wanted me to. Where would he be without me? I saved his life. He wouldn't even be in a law firm. Who would have had him? Nobody. Totally disgraced. Only I saved him.

He did? Kavanaugh had a lifetime appointment on the D.C. Court of Appeals when Trump nominated him and would have sailed through the nomination process for the Supreme Court if Christine Blasey Ford hadn't stepped forward with her accusations of sexual assault when they were high school students. Trump has reportedly claimed that Republican senators begged him to pull the nomination saying, "Cut him loose, sir, cut him loose. He's killing us, Kavanaugh." Trump supposedly responded, "I can't do that," telling Wolff, "I went through that thing and fought like hell for Kavanaugh — and I saved his life, and I saved his career. At great expense to myself ... okay? I fought for that guy and kept him."

Yes, this sounds so much like Trump. Everyone knows his word is his bond and he's loyal as the day is long. Wolff also quotes Trump as saying:

I don't want anything ... but I am very disappointed in him, in his ruling. I can't believe what's happening. I'm very disappointed in Kavanaugh. I just told you something I haven't told a lot of people. In retrospect, he just hasn't had the courage you need to be a great justice. I'm basing this on more than just the election.

Since the election seems to literally be the only thing Trump can think about it's hard to know what else he might be referring to. It's likely that there has been some grumbling, among those who have made pilgrimages to kiss the ring, that Kavanaugh has not voted with the far-right justices in every case, as they appointed him to do. Trump doesn't care about that unless it affects him personally, of course, but he considers "his justices" to have been placed on the court to do what they're told and he doesn't like it when they are perceived to have deviated from their orders.

But let's face it, his carping is really about the election. Back in September, Trump made his expectations clear:

His rationale for pushing through Amy Coney Barrett so close to the election was to ensure there were enough votes to decide the contest for him, as he made even clearer a few days later:

I think this [election] will end up in the Supreme Court. And I think it's very important that we have nine justices. This scam that the Democrats are pulling — it's a scam — the scam will be before the United States Supreme Court. And I think having a 4-4 situation is not a good situation, if you get that. I don't know that you'd get that. I think it should be 8-0 or 9-0. But just in case it would be more political than it should be, I think it's very important to have a ninth justice.

He assumed "his justices" would take up any election case and would naturally vote in his favor, regardless of the facts or the circumstances. They owed him.

None of Trump lawyer Rudy Giuliani's post-election lawsuits made it up the ladder to the court, because they were all garbage. But before the election Kavanaugh was notably amenable to Trump's arguments about mail-in votes being counted after the election, in a Wisconsin case in which the court affirmed a lower court ruling that the state Supreme Court could not extend the deadline. He also looked favorably on an idea percolating in right-wing legal circles for some time about who gets to decide election cases. Slate's Mark Joseph Stern raised the alarm about a footnote in Kavanaugh's concurrence, in which he endorsed a notoriously extreme argument from the Bush v. Gore case:

William Rehnquist, joined by Antonin Scalia and Clarence Thomas — tried to overturn the Florida Supreme Court's interpretation of the state's own election law. As a rule, state Supreme Courts get final say over the meaning of their own state laws. But Rehnquist, Scalia, and Thomas argued that SCOTUS must review their decisions to ensure they comply with the "intent of the legislature." In other words, the Supreme Court gets to be a Supreme Board of Elections that substitutes state courts' interpretation of state law with its own subjective view of a legislature's "intent."

Anthony Kennedy and Sandra Day O'Connor refused to sign on to that at the time, and Chief Justice John Roberts didn't go along with it this time around either. But it's fair to ask if the new Trump majority of Thomas, Alito, Gorsuch, Kavanaugh and Barrett would. Considering Roberts' hardline views on voting rights, he might, in the end, throw his lot in with them on this too.

There was a lot of chatter around the election about whether or not state election officers and courts have the authority to administer elections. We've recently seen state legislatures take action against the secretaries of state and nonpartisan election officials. If the Supreme Court sees fit to make itself the final arbiter of the states' election laws, it's entirely possible that this court would be open to letting GOP legislatures capriciously change the laws to their advantage — or even overturn elections. It's almost certain that any new voting rights laws passed in this Congress will find a hostile majority when cases make their way through the court. It would not be surprising if this Supreme Court was very good for Trump and his movement over the next few years.

Not that it matters, as far as the right-wing justices and their backers are concerned. They wouldn't actually be doing it for Donald Trump, even if he might benefit from it — and even though he inspired all this drastic action based upon the Big Lie in the first place. The Republican legal community always saw the big opportunity it had in Trump, and ruthlessly exploited it. Former White House counsel Don McGahn, Leonard Leo of the Federalist Society and their most cynical ally, Sen. Mitch McConnell, recognized that they could remake the federal courts and use them to secure power, even as a declining electoral minority. Little did they know that Trump's loss and the Big Lie that followed would supercharge that plan the way it has.

Trump may be unhappy with "his justices," but that's because he never understood that he wasn't using them. They were using him, and they are perfectly happy with how it's turned out so far.