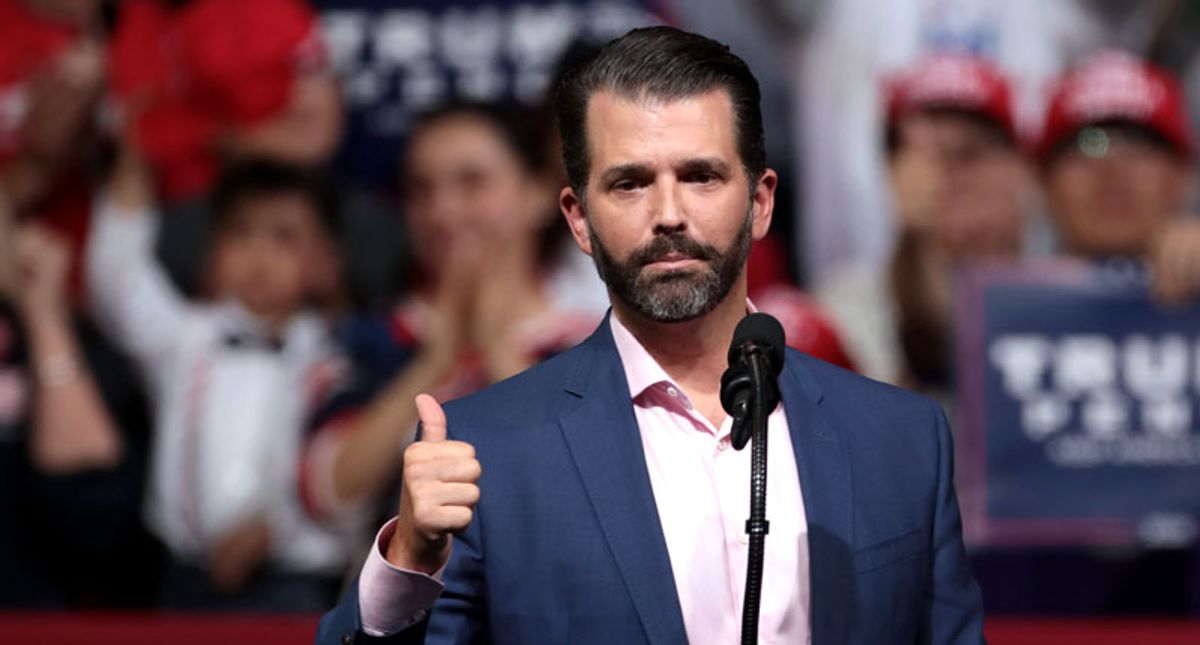 Donald Trump Jr. proudly posted an Instagram photo of himself and a fish in 2019. Fill in your own joke. But it turns out the star of the photo was none of the two: It was the MAGA T-shirt Trump was sporting featuring the logo of a para-military group calling itself the "Three Percenters."

"As President Donald Trump and his allies face accusations of inciting the riot at the U.S. Capitol, an image made the rounds on social media Monday showing Donald Trump Jr., the president's eldest son, wearing a shirt bearing a logo of a far-right militia group with members who are under FBI investigation over their alleged involvement in the riot."

"The Three Percenters are a pro-Trump, pro-gun militia group whose name comes from the incorrect idea that only 3% of Americans fought the British during the Revolution—according to the Anti-Defamation League it's dedicated to "protecting Americans from government tyranny" and its adherents have a "track record of criminal activity ranging from weapons violations to terrorist plots and attacks." People wearing clothing and armor with the Three Percenters logo participated in the riot on January 6.

"A man allegedly associated with the group, Robert Gieswein, 24, of Cripple Creek, Colorado, was charged with assaulting federal officers near the Capitol with bear spray and a baseball bat in court documents made public on Sunday; Gieswein's now-deleted Facebook page showed pictures of him flashing the Three Percent symbol outside the bar owned by Rep. Lauren Boebert (R-Colo.), according to the Daily Beast."

The Three Percenters might seem a bit obscure, but quite a few Instagram followers were quick to spot Trump's fashion choice at the time he posted his fish story on May 27, 2019. Here are some of the responses:

"That's just not a regular MAGA shirt. That's the "three percenters" logo on the skull. A far-right paramilitary militia group. Just more signals in plain sight we may not have noticed. Racist POS!"

"Good to see you wearing a far-right extremist paramilitary groups logo. Explains many things, including your true values and beliefs!"