Macho men: Historian explains how Trumpism is the rage of a threatened masculine ideal 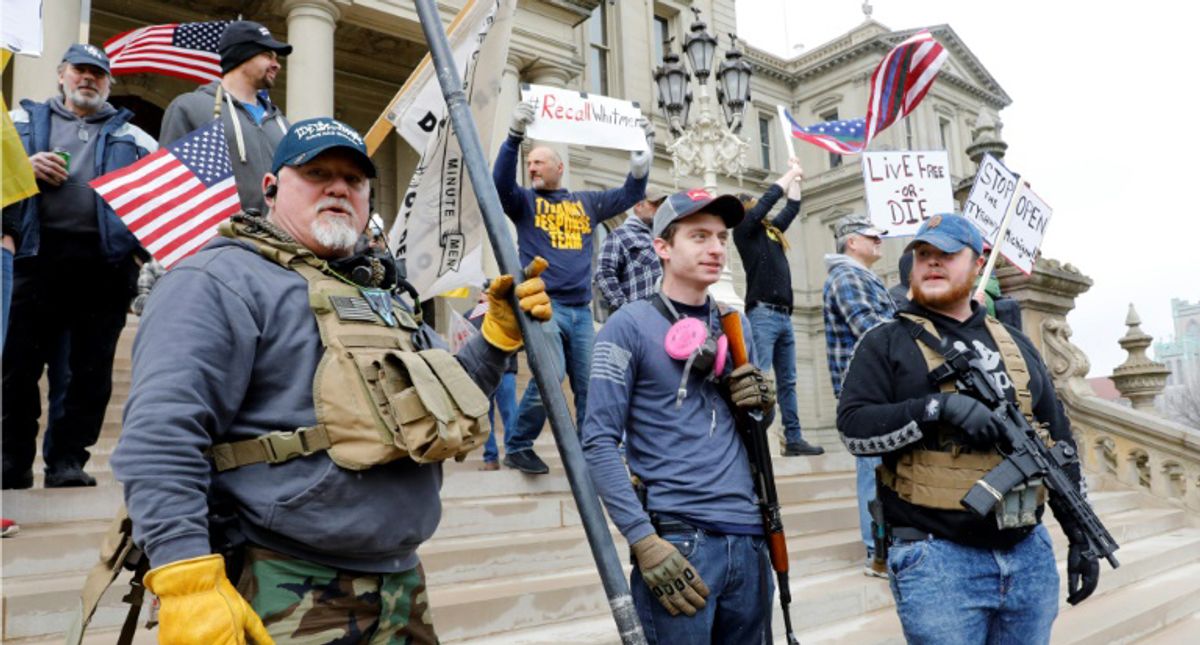 As political leaders, Benito Mussolini and Donald Trump were macho men. Although the latter is no longer president, his mindset still rages across the nation and needs to be replaced by a nobler view of manhood.

Among the first twentieth-century macho leaders, Mussolini, who was "something of a rapist" and eventually claimed to have had 169 mistresses, was the most significant. Emphasizing virility and war, he once said, "War is to man what motherhood is to a woman. From a philosophical and doctrinal viewpoint, I do not believe in perpetual peace."

In her book Strongmen: Mussolini to the Present, Ruth Ben-Ghiat treats the Italian dictator as the first of many machismo rulers. Among others are former heads of state like Augusto Pinochet Ugarte of Chile, Silvio Berlusconi of Italy, and now Trump, as well as present rulers like Vladimir Putin of Russia, Jair Bolsonaro of Brazil, Rodrigo Duterte of the Philippines, and Recep Tayyip Erdoğan of Turkey. She believes they "damage or destroy democracy and use masculinity as a tool of political legitimacy. . . . Such rulers have exploited their countries' resources to satisfy their greed and [more recently] obstructed efforts to combat climate change. Their dependence on corruption and censorship and their neglect of the public good mean that they handle national crises badly and often bring ruin upon their people."

In dealing with Mussolini, Ben-Ghiat writes that as a young schoolteacher he was "known for carrying brass knuckles and sexually assaulting women." After World War I, in which he fought, he founded Fascist Combat Leagues that included many veterans. She believes that "the cults that rose up around Mussolini and Hitler in the early 1920s answered anxieties about the decline of male status," and she details Mussolini's leadership over Fascists who murdered "thousands of Socialists and left-leaning priests." (For more on the macho mindset under Mussolini, see here.)

Transitioning to Trump, his macho politics were evident until the end of his presidency--and beyond. They were commented on most recently by NPR political reporter Danielle Kurtzleben in her "Macho Politics Defined Trump's Presidency, Culminating With Capitol Riot" and The Atlantic journalist Megan Garber in her "The 'Pussy' Presidency."

Kurtzleben mentions Trump's pre-storming-the-Capitol speech of January 6, in which he made fun of Georgia Governor Brian Kemp's small size, and noted it was typical of Trump to belittle "an opponent as weak while portraying himself and his supporters as strong."

Kurtzleben notes that Trump "has been unfailingly consistent in his fixation on being a tough guy--one with a very particular, combative form of masculinity." She quotes former chief of staff John Kelly saying that Trump can't admit mistakes because "his manhood is at issue here." And she recounts the response of Trump-campaign- spokesman Hogan Gidley after being asked if Trump felt "emasculated" because of social media's actions against him. Gidley's response? "I wouldn't say emasculated." He's "the most masculine person to ever hold the White House."

Both Kurtzleben and Garber mention Trump's urging of Vice President Mike Pence to aid the reversal of November election results: "You can either go down in history as a patriot, or you can go down in history as a pussy." Garber links this remark with Trump's earlier one in 2005 (not publicized until October 2016) that he could "do anything" he wanted with women, including grabbing them "by the pussy." She sees that early bragging as symptomatic of Trump's misogyny and dominating personality.

Trump's machoness, in Garber's view, is all about dominance and self-aggrandizement. "It rejects values typically associated with the feminine—compassion, collaboration, deference to expertise—as evidence of weakness." She believes that although he glorifies dominance, he is basically cowardly, having avoided military service and being subservient to "strongmen" like Putin.

Kurtzleben and Garber also comment on Trump's supporters. Kurtzleben cites a couple of reports that indicate that men, as well as women, who approve of dominating men were "likely to support Trump." Garber mentions all the "grotesquely masculine" symbols of the Capitol building occupiers (most of them white males): "the pelts, the horns, the capes, the exposed chests, the tactical gear."

Even if Trump's macho mindset was greater than that of previous presidents, it was not completely new. As historian John McCurdy has observed, "Beginning with the arrival of Columbus in 1492, the European conquest of America was built upon the sexual mistreatment of indigenous women, and the racialisation of gendered violence remained a constant throughout early America, growing more acute when African American slavery became the dominant form of labour."

In his Presidential Machismo: Executive Authority, Military Intervention, and Foreign Relations and in a HNN article (2002), historian Alexander DeConde examined macho behavior up to the early days of George W. Bush's presidency. (See here for more HNN articles on "masculinity.") My 2015 HNN essay "Putin vs. Obama: Macho Man' vs. Girly Boy'?" carries the consideration of presidential machismo up to the last president before Trump. There I mention that

Republican attacks against Obama constantly charge that he is weak or feckless—code for unmanly?—regarding Putin, terrorists, Iran, and others. . . . At times, their polemics suggest that the main difference between Republicans and Democrats is that the former is the party of macho men and the latter of 'bleeding-heart liberals,' secular feminists, and 'sissy' eggheads.

Richard Hofstadter's Anti-Intellectualism in American Life (1962) quotes a conservative writer's definition of an egghead as "a person of spurious intellectual pretensions, often a professor or the protégé of a professor. Fundamentally superficial. Over-emotional and feminine in reactions to any problem." Many a conservative Republican thought of Adlai Stevenson (Democratic presidential candidate in 1952 and 1956) as just such an egghead.

Another example of machismo comes from author Philip Caputo, who recalled how as a young college student in 1960 he enrolled in a Marine Corps officer training program partly as a result of the romantic heroism of various war movies. He explained his motivation as such: "The heroic experience I sought was war; war, the ultimate adventure; war, the ordinary man's most convenient means of escaping from the ordinary. . . . Already I saw myself charging up some distant beachhead like John Wayne in Sands of Iwo Jima, and then coming home a suntanned warrior with medals on my chest . . . I needed to prove something—my courage, my toughness, my manhood."

In her book Jesus and John Wayne: How White Evangelicals Corrupted a Faith and Fractured a Nation (2020) Kristin Kobes Du Mez writes of Evangelicals admiring Wayne "for his toughness and his swagger" and how he came "to symbolize a different set of virtues—a nostalgic yearning for a mythical 'Christian America,' a return to 'traditional' gender roles, and the reassertion of (white) patriarchal authority."

Du Mez traces back white evangelicals' overwhelming support of Trump in 2016 to the 1960s and 1970s "threats of communism and feminism. Believing that the feminist rejection of 'macho' masculinity left the nation in peril, conservative white evangelicals promoted a testosterone-fueled vision of Christian manhood. In their view, America needed strong men to defend 'Christian America' on the battlefields of Vietnam and to reassert order on the home front." (Although declining slightly, three out of four white evangelicals still supported Trump in 2020).

Looking at Trump's support overall, "anxieties about the decline of male status"--as Ben-Ghiat phrased it regarding many Mussolini supporters in the 1920s--seems to be important. A 2008 study found that men felt "especially threatened by challenges to their masculinity," which was in "a precarious state requiring continual social proof and validation." And we know that many more men supported Trump than women; Trump's macho mindset was one way, unhealthy as it might be, of trying to bury male anxieties.

Supporting gun rights, keeping transgender people out of the military, opposing affirmative action, even refusing to wear a face mask--Fox News commentator Tomi Lahren's response to Biden's frequent mask wearing: "Might as well carry a purse with that mask, Joe"--all reflected such insecurity. In 2016 writer George Saunders expressed the belief that many Trump supporters suffered from what he called "usurpation anxiety syndrome," which he defined as "the feeling that one is, or is about to be, scooped, overrun, or taken advantage of by some Other with questionable intentions." Immigrants, feminists, egghead professors, Black Lives Matter protesters, all might be perceived as such Others.

But how to assuage such anxieties, how to replace a macho mindset with a nobler view of manhood, and what that might be, is no easy matter. And a major rethinking of manhood is needed to help reduce political polarization.

In a 2015 essay I mentioned an insightful piece by David Masciotra that contrasted two opposing views of masculinity as presented in the films American Sniper and Selma. The first reflects machoism. The second, about Martin Luther King, Jr. and other civil-rights protesters, displays a truer and nobler type of masculinity.

Although it may be a slower process than many of us wish, an increasingly critical view of Trump's macho masculinity is likely to emerge, weakened as it is by images of the Trump-inspired mob storming of the Capitol building and Trump's own sore-loser whimpering.

No one image or role model of masculinity will satisfy everyone. But whatever ones emerge should possess noble values, compassion as well as courage, humility as well as heroism. Such models will help us in the difficult task of restoring civility to American political discourse.

Walter G. Moss is a professor emeritus of history at Eastern Michigan University, a Contributing Editor of HNN, and author of An Age of Progress? Clashing Twentieth-Century Global Forces (2008). For a list of his recent books and online publications click here.