Trump showed a propaganda video at a rally similar to the early days of the Nazis: analysis 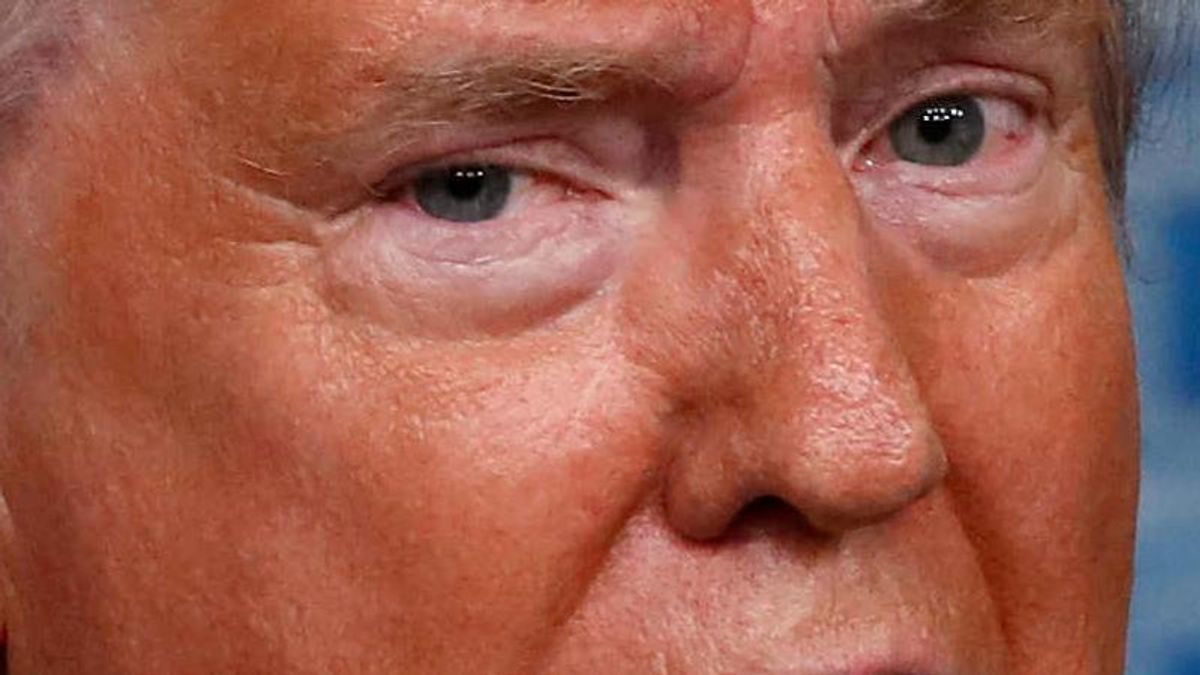 Lost amid the conversations about the evidence stacking up against former President Donald Trump for his role in the attack on the U.S. Capitol was a propaganda video that analysts are calling downright fascist.

In a breakdown of the video shown, experts explained to Just Security that they've seen these types of propaganda before when researching Nazis and anti-Semitism.

The report began by explaining the framework of fascism, citing Adolph Hitler's Mein Kampf, which talks about his "years of suffering in Vienna" while he saw Jews in power when he believed he could do better and was entitled to just as much power and control. Propaganda surrounds "an awesome sense of loss," the report explained, "and a desire for revenge against those who are responsible."

"The goal of fascist propaganda is to mobilize a population to violently overthrow multi-party democracy and replace it with the leader," the report explained.

So the film shown at the Ellipse ahead of the Trump speech takes these themes of "masculinity, and mournful loss at the hands of traitors" and assigns Trump as the hero of the story, "justifying a violent restoration of recent glory."

The video starts with zeroing in on Trump's eyes followed by the leaders in the Capitol building "America's Reichstag." Then there's a photo of the Hollywood sign followed by images of the United Nations General Assembly and the European Union Parliament. It connects the "Jewish control of Hollywood" to control of world governments.

It then shows videos of Joe Biden looking silly followed by videos of Sen. Chuck Schumer (D-NY) with a voiceover saying, "For too long, a small group in our nation's capital has reaped the rewards of government, while the people have borne the cost." The implication is that Biden is clearly not in control and Jews like Schumer are the ones pulling the strings. It shows videos of Pelosi with Jewish Congressmen Jerry Nadler (D-NY) and Adam Schiff (D-CA) standing beside her.

"Who, then, are this 'small group in our nation's capital'? The video suggests it is a group that controls Hollywood and the Democratic Party and seeks to use Black liberation movements to undermine the nation and bring about world government," the analysis explains.

The video progresses, showing the horrors of daily society and the struggles Americans are facing.

"The establishment protected itself, but not the citizens of this our country;" the voiceover says with the sounds of gunshots. Images flash showing "these citizens betrayed by a duplicitous establishment – mournful pictures of coffins of veterans, homeless encampments, and a series of slides varying between nostalgic images of white American families over dinner with rural destitution – a worn down home flying a large American flag with an old pickup truck in front. At the end of these grim scenes of the results of elite betrayal, Trump declares, 'This all ends right here, right now'" the analysis continues.

Then Trump is introduced as the hero of the story and all of his followers showing signs of strength and determination. Trump is shown watching rockets launch and fighter jets stream across the sky.

The mood shifts again as a photo of a smiling Joe Biden is shown, followed by vacant streets, empty storefronts and Americans trapped in their homes. The word "FEAR" flashes across the screen. Then videos of Black Lives Matter rallies and signs saying "Defund the Police." Then it flashes back to Trump with soaring stock markets and more military imagery. A Black man and a white man with a "Jesus Saves" shirt embrace.

"The message of the video is clear," said the analysis. "America's glory has been betrayed by treachery and division sown by politicians seeking to undermine and destroy the nation. To save the nation, one must restore Trump's rule."

The report closes by noting that the Nazis didn't rise to power by talking about exterminating the Jews. They rose to power trashing people as "socialists and communists," with militias and "violent troops disrupting democracy," the report closed. It's remarkably similar to what is happening today.

Read the report at JustSecurity.org.