During the 2020 pandemic, former President Donald Trump and some of his Republican allies advocated that states must reopen because there was an outbreak of suicides due to mental health issues caused by COVID-19 restrictions.

The numbers weren't there when Trump made the comment. Looking back now, the data for the full year reveals it was all a lie.

The day before the town hall, during a coronavirus task force briefing, Trump said, "I'm talking about where people suffer massive depression, where people commit suicide, where tremendous death happens… I mean, definitely would be in far greater numbers than the numbers that we're talking about with regard to the virus."

Trump claimed that people were depressed over losing their jobs.

"While Trump has been warning since March that any pandemic lockdowns would lead to 'suicides by the thousands,' several studies from abroad have found that when governments imposed such restrictions in the early waves of the pandemic, there was no corresponding increase in these deaths," Wired wrote in Oct. 2020. "In fact, suicide rates may even have declined. A preprint study released earlier this week found that the suicide rate in Massachusetts didn't budge even as that state imposed a strong stay-at-home order in March, April, and May."

Looking back on the year as a whole, the data prove Trump was making up the story without any evidence to confirm it.

The JAMA Network, a place that collects medical journals published by the American Medical Association, explained that the 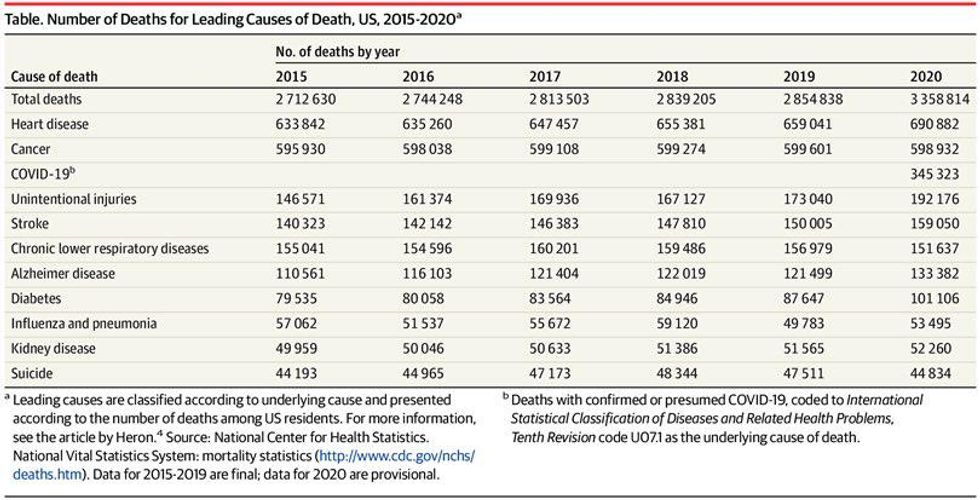 "COVID-19 was the third leading cause of death in 2020, with an estimated 345 323 deaths, and was largely responsible for the substantial increase in total deaths from 2019 to 2020," the report said. "Substantial increases from 2019 to 2020 also occurred for several other leading causes. Heart disease deaths increased by 4.8 percent, the largest increase in heart disease deaths since 2012. Increases in deaths also occurred for unintentional injury (11.1 percent), Alzheimer's disease (9.8 percent), and diabetes (15.4 percent). Influenza and pneumonia deaths in 2020 increased by 7.5 percent, although the number of deaths was lower in 2020 than in 2017 and 2018. From 2019 to 2020, deaths due to chronic lower respiratory disease declined by 3.4 percent and suicide deaths declined by 5.6 percent."

Read the full report at JAMA.