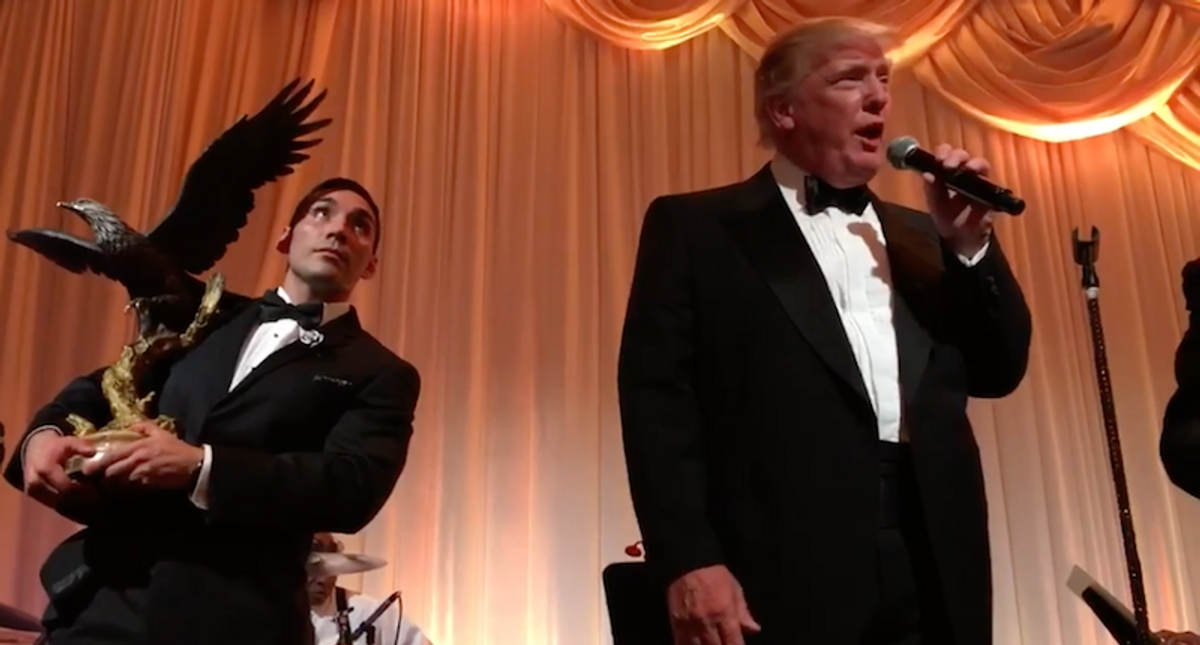 President Donald Trump left Mar-a-Lago early to go back to Washington one week ahead of his Jan. 6 protest rally he intends to host to attack the 2020 election results. That left a void of attendees interested in hanging out with Donald Trump Jr., Kimberly Guilfoyle, Rudy Giuliani and Vanilla Ice.

"No official explanation for the President's early departure from Mar-a-Lago was given, though he remains consumed with efforts to overturn the election results and tensions are ratcheting up in the Persian Gulf ahead of the one-year anniversary of the US killing of Iran's top general," CNN.com reported.

While Don Jr. was joined by his brother Eric and half-sister Tiffany, Ivanka and Jared Kushner were not in attendance.

"Many guests and entertainers were left disappointed upon learning from CNN late Wednesday that Trump would be leaving Florida early," the report said. "Ticket prices for the New Year's Eve gala have steadily increased since Trump took office, and reached up to $1,000 this year, a person familiar with the matter said."

While 500 tickets were sold, the ballroom, which holds 700 people, was largely vacant except for a few dozen couples dancing.

While many attacked the maskless crowd as a superspreader event, most in Trump's circle have already had the virus and likely assume they're "immune," as the president said. Though some noted that the lyrics "play that funky music 'til you die" seemed to have an apt call.

See the ridicule below:

I am so mad that Vanilla Ice is MAGA that I drove 12 hours to my parent’s house to go in the attic and smash his most recent cassette.
— Tony Posnanski (@Tony Posnanski)1609529893.0

Imagine going to a NYE party in the middle of a pandemic and risking everything to see Vanilla Ice.
— Jesse Lifson (@Jesse Lifson)1609530969.0

Maskless AND they could only manage to get Vanilla Ice to perform. Its unreal how trashy these people are. https://t.co/2MiyWJy3Ij
— Shawn Patterson (@Shawn Patterson)1609534111.0

Nothing epitomizes 2020 Trumpism more than an obviously hard up Berlin playing “Take My Breath Away” at a Mar-A-Lag… https://t.co/SzBo1n7HMb
— Hesiod Theogeny (@Hesiod Theogeny)1609515518.0