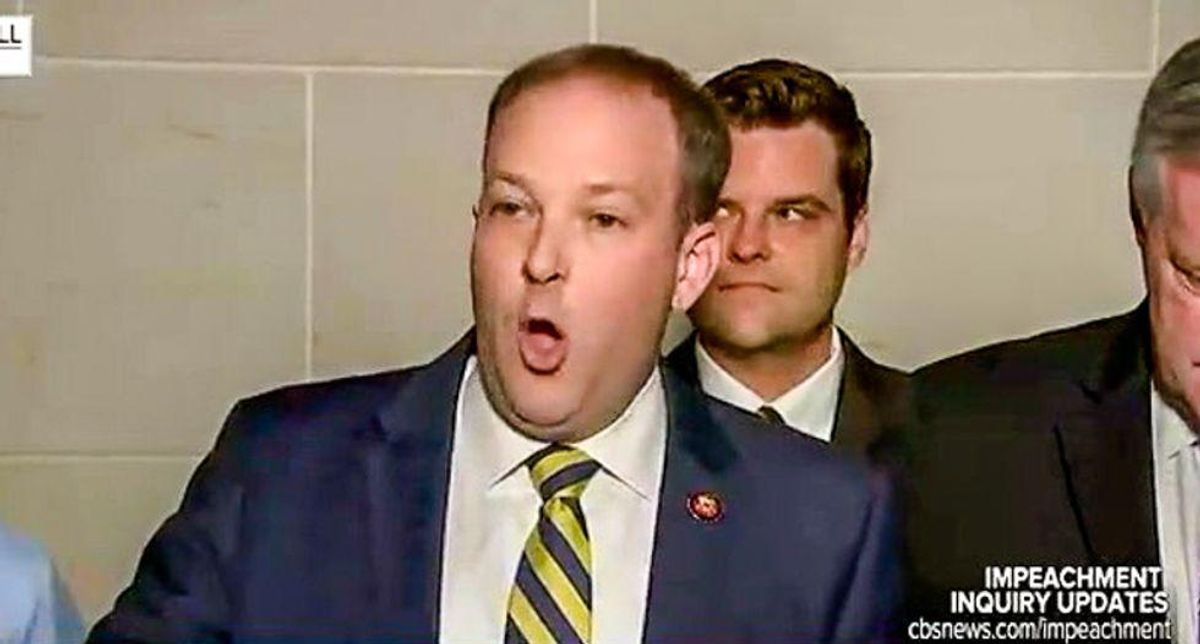 The good news is that there is a small Trump group, 20%, that thinks there should be room in the Republican party for different views or agree with Cheney that Trump lost the election. Unfortunately, they also happen to be the least likely to vote in the primary elections which means that only full-blown Trump cultists will be deciding who becomes the face of the GOP. Cheney's got a very heavy burden to turn any of that around.

It's clear though that there is some discomfort among certain Republican officials who jumped on the Trump train and now have to defend it. Granted, they are few and far between as most Republicans are more than happy to just flagrantly lie or openly defend the indefensible. Take for instance Andrew Clyde, the Republican congressman from Georgia who claimed in a House hearing last week that the violent mob that stormed Capitol on January 6th was not staging an insurrection and could have been mistaken for tourists:

But there are some who have a bit of a difficult time completely relinquishing any claim to reason or truth so they attempt to finesse their Trumpism with a rational dialog about why it's important to let bygones be bygones. One such Republican appears to be Texas Rep. Dan Crenshaw. He has tried to make a reputation for himself as a "reasonable" Republican, famously appearing on Saturday Night Live to demonstrate his generous absolution for a crude joke about him that missed. He appeared on Meet the Press on Sunday and ran up against an uncharacteristically aggressive Chuck Todd. It didn't go well:

He can run but he can't hide. Crenshaw's insipid insistence that the party just has a "disagreement" about the election being met with Chuck Todd going back in his face with "there's not a disagreement about the facts so do any of your critiques come across as credible if you can't accept the fundamental fact that our democracy held a free and fair election?" is not something I ever expected to see — but it sure is welcome.

Crenshaw was spouting the party line that says Republicans want to "move on" from all of the unpleasantness over the 2020 election and the January 6th insurrection so that they can concentrate on "policy" and I'm sure many of them would love to change the subject and just quietly work on suppressing as many votes as possible without all the hoopla. But, as Todd pointed out, Donald Trump and his ecstatic followers are obsessed with "the Big Steal" and there is no escaping that fact.

Crenshaw is obviously ambitious and recognizes that this Trump folly could easily go sideways and if he plans to ascend to higher office he wants to be prepared to go in whatever direction that requires. He's from Texas so it's unlikely that his Trumpist leanings will hurt him too much. But what of Blue State Republicans who might want to run state-wide in the future?

Elise Stefanik, R-NY, the very determined congresswoman who took Cheney's place in the House leadership conference demonstrated an impressive pirouette from "moderate" to hardcore, Trumper which isn't very challenging in today's party. (They don't care about much of anything as long as you show undying fealty to their undisputed leader.) But there's another politician from New York who is making a bid for governor and is currently twisting himself into a pretzel trying to spin the other way and finesse his years of delirious Trump worship in a state Joe Biden won by 23% points.

Rep. Lee Zeldin of Long Island came to Congress in 2015 as a standard-issue law and order Republican New Yorker. But he became one of Trump's staunchest defenders from the moment he took office and stuck with him through thick and thin. He was a designated point man during the first impeachment, thrilling the president by calling the process a "charade" and a "clown show" and proudly becoming the congressman who spoke more in the impeachment depositions than any other Republican, at least 550 times according to NBC:

His attempts to steer the depositions away from Trump's conduct and toward a host of tangential matters— including the Biden family, a conspiracy theory about the 2016 election, and even the witnesses' own credibility — have driven counsel for multiple witnesses to their wit's end.

Zeldin stuck with the president all the way through the post-election denialism, even issuing this dark warning on January 2nd:

Of course, he also voted against certifying the election.

Zeldin is now trying to walk back his Trump sycophancy and it's almost comical. He told Newsday:

"So, you had tens of millions of people that came out and voted for each of the candidates. Their votes were counted. They're counted once, and you ended up with an outcome. And that's how President Trump, uh … President Biden became the president, was by winning the November 2020 election."

Evidently, he thinks he will be able to convince people that there is a different Lee Zeldin out there who used to say exactly the opposite of everything he's saying now.

Contradicting everything you've ever said and acting as if it's perfectly normal resulted in a nice promotion for his fellow New Yorker Stefanik so who knows? Maybe GOP politics are now so surreal that you can literally reinvent yourself from one month to the next without ever being held accountable for anything. How convenient?