It's been four days since Tucker Carlson did his already-infamous opening monologue where he asked his audience why he should hate Russian President Vladimir Putin.

"Does he eat dogs?" Carlson asked last week, along with other questions contrasting him with Democrats. "These are fair questions and the answer to all of them is no... It may be worth asking yourself… why do I hate Putin."

According to Carlson, now everyone hates Putin, it's just a fact that everyone agrees to. But he took it a step further, playing a clip of Rep. Eric Swalwell (D-CA) attacking Carlson's Feb. 24 question about why people should hate Putin.

Swalwell accused Donald Trump, Mike Pompeo and Tucker Carlson of all rooting for Russia, and he pointed out that clips of them are being played on Russian state television to make it seem as though the Kremlin enjoys broad American support. According to Carlson, however, that never happened.

"You know, it's such an awful thing to say. We hesitated to even play it," Carlson said. "It's very common. You hear it every day. The question is: why are they saying that? It doesn't make sense. But it makes political sense. It is an effort to cover their own tracks."

Carlson didn't play his videos from last week in which he begged Putin for an interview. He also neglected to recall Pompeo's comments last week calling Putin "an elegantly sophisticated counterpart."

Former President Donald Trump explained last Tuesday to the Clay Travis & Buck Sexton Show: "I went in yesterday and there was a television screen, and I said, 'This is genius.' Putin declares a big portion ... of Ukraine, Putin declares it as independent. So, Putin is now saying, 'It's independent,' a large section of Ukraine. I said, 'How smart is that?' And he's gonna go in and be a peacekeeper. That's [the] strongest peace force."

He went on to say that the U.S. should try the same thing on the U.S.-Mexico border.

Meanwhile, Russian state media has been promoting Carlson, Pompeo and Trump online and over the airwaves, which you can see below: 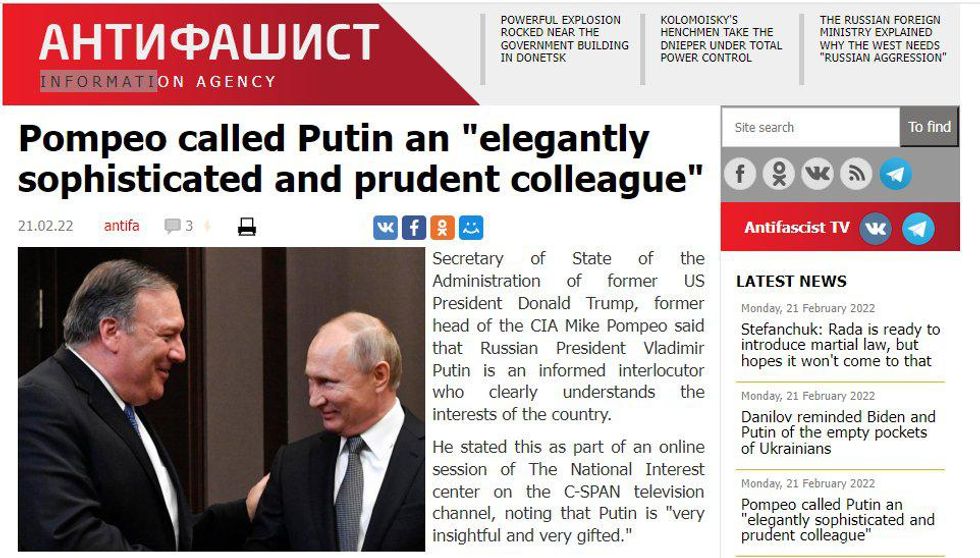 You can see the Carlson back-peddle in the video below: