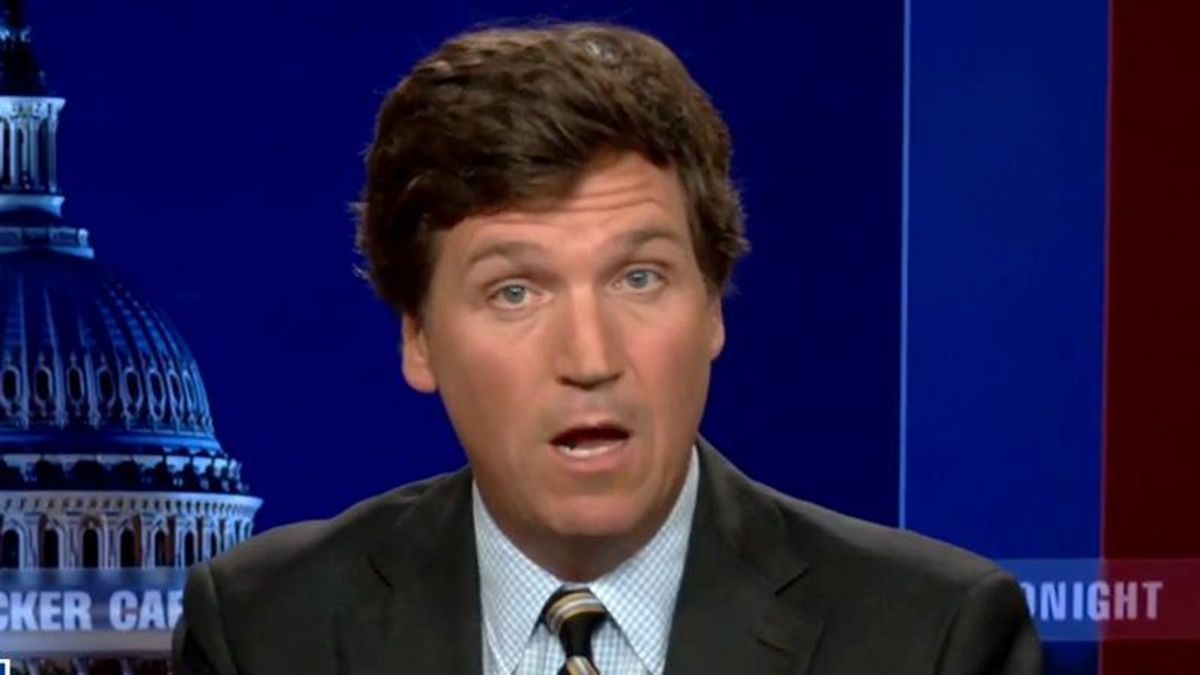 "Stochastic terrorism" is the strategic repeated use of language and other means of communication intended to encourage violence while still maintaining some level of plausible deniability. The advantage of this tactic is that the individual or group that practices it can then claim innocence and accept no responsibility for the behavior of others. The most sophisticated uses of stochastic terrorism will result in a type of moral inversion — not to mention an inversion of reality — in which the aggressor can then claim they are somehow the "real victims."

This has been one of the dominant strategies of the American right since at least the 1980s, with liberals, progressives, nonwhite people and other designated groups deemed to be the enemy Other targeted as "socialists" or "communists," anti-American or anti-Christian, "politically correct" snowflakes, "parasites," "losers" and "takers," along with other demeaning language intended to provoke or legitimate violence.

This language both reflects political polarization in the United States and fuels it. Moreover, Democrats and Republicans are not equally polarized: Since the 1990s it is the Republican Party that has become increasingly extreme, rejecting any pretense of "normal politics" and seeking to undermine democracy. It now more closely resembles right-wing extremist political parties in Europe than more mainstream or "centrist" political organizations.

The Trump regime and its larger neofascist movement (which now includes virtually the entire Republican Party) escalated the use of stochastic terrorism to extreme levels.

The result was a record increase in hate crimes and political violence against nonwhite people, Muslims, Jews, immigrants and other targeted groups. This wave of right-wing violence and terrorism included mass shootings and other lethal actions. In the wake of the Trump regime's coup attempt and the Capitol attack, law enforcement and other experts are warning that white supremacist and other right-wing violence remains the greatest threat to America's domestic safety and security.

The spiral of escalation continues: Right-wing stochastic terrorism is increasingly being replaced by direct public threats of violence against those deemed to be "the enemy".

Last week a host on the One America News Network (OANN), which can better be described as a right-wing propaganda outlet than a news network, appeared to endorse mass executions of Trump's enemies who supposedly tried to "carry out a coup" against him. By implication, the host also suggested killing Americans who voted for Joe Biden:

How many people were involved in these efforts to undermine the election? Hundreds? Thousands? Tens of thousands? How many people does it take to carry out a coup against the presidency? And when all the dust settles from the audit in Arizona and the potential audits in Georgia, Michigan, Pennsylvania, Nevada, and Wisconsin, what happens to all these people who are responsible for overthrowing the election?
What are the consequences for traitors who meddled with our sacred democratic process and tried to steal power by taking away the voices of the American people? What happens to them? Well, in the past, America had a very good solution for dealing with such traitors: execution. Treason is considered the highest of all crimes and is the only crime defined in the U.S. Constitution which states that anyone is guilty of treason if they support America's enemies.

These are not implied threats of violence. They are direct commands to right-wing violence.

Healthy democratic societies have a political culture in which public policy disputes and other disagreements are resolved without using force. What OANN and other elements of the right-wing movement desire is a form of anti-politics, where they are able to assert their will over others without consequences, and where to dissent from the right-wing agenda is a crime to be punished by violence. Ultimately, today's Republican Party and "conservative" movement have embraced a fascist logic in which political ideology becomes religious dogma and heretics are to be driven out.

This is just one of the many examples of how far Donald Trump normalized right-wing political violence. Granting permission for violence and other anti-social and anti-human behavior was a core element of Trump's fascist appeal for his followers. Trumpism is a political cult: Violence is one of its rites and a way of bonding the leader to the followers. To that end, the attraction to violence and the collective longing to act out violent impulses against "enemies" or "outsiders" with impunity represents a type of cathartic freedom for Trumpists and other fascists.

For stochastic terrorism and other commands to violence to achieve maximum impact, they must be repeated and reinforced by various sources in an echo chamber effect. Fox News has long been the epicenter of that echo chamber, with Tucker Carlson as one of its most powerful voices.

Last Thursday, Carlson continued with his campaign to defend (white) "civilization" against its "enemies" by somehow connecting a supposed controversy about scholar Michael Eric Dyson to 19th-century pseudoscience and then to "critical race theory" as somehow part of a nebulous and nefarious plot to "oppress" white people in "their own country."

At the crescendo of his performance, Carlson said this, specifically attacking Gen. Mark Milley, chairman of the Joint Chiefs of Staff:

And by the way, if it's a medical condition, at what age can you catch white rage? Most of us assumed our two-year-olds were just teething. Now we know it's their whiteness that's making them so angry. Thanks, Mark Milley. We appreciate your contribution to our generation's scientific racism. By the way, have you read anything about winning wars recently? Apparently not.
We could go on — pundit after senator after professor after general — each one of them spewing race hate — whiteness! White rage! — dressed up as some new academic theory. We certainly have the tape. We'll spare you. You've seen it. It's everywhere. The question, how do we get out of this vortex before it's too late? How do we save the country before we become Rwanda? What should we be teaching our children, so that they can live in a country that you want to live in, one full of many different kinds of people who actually like each other, who can work together, who are united by the fact that they are all Americans? That's the question.

This was accompanied by an image on the screen that read "Anti-White Mania."

Carlson and his writers are masters of mainstreaming white supremacist talking points and narratives. Through a process known as "narrative laundering," profoundly racist arguments are massaged into something more palatable for the millions of people (predominantly white) who watch his program every evening.

Those who are not familiar with the white supremacist movement and its set of imaginary narratives likely did not grasp the deeper meanings and allusions that summoned by Carlson in his claims about Rwanda and "anti-white" violence. Most obviously, Carlson's reference to Rwanda was an attempt to invoke the inter-ethnic genocide that occurred there in the 1990s as a way of provoking racial paranoia and anxieties about the supposed possibility of "white genocide" in America.

Through that rhetorical move, Carlson was also directly signaling to decades-old, if not centuries-old, fears and fantasies about a "race war" in which white people would finally subjugate and then exterminate or exile Black and brown people, "cleansing" North America and Europe and driving such perceived outsiders back to their "homelands" in Africa or elsewhere. The not-quite-articulated result of this apocalyptic conflict would be a "white nation" and white global empire, also involving a second Holocaust against the Jewish people, who are viewed by white supremacists as part of a global cabal that is somehow "controlling" Black people to do their bidding. It is no coincidence that much of the QAnon conspiracy theory — an updated version of the "Protocols of the Elders of Zion" — is structured in a similar manner.

Carlson was also channeling white supremacist obsessions with supposed large-scale anti-white violence in South Africa and Zimbabwe, especially reports of attacks by Black people against white farmers. Such incidents have been a source of compulsive fascination in the white supremacist community in recent decades.

In an effort to put Carlson's allusions to race war and genocide into broader context, I asked Texas A&M communications professor Jennifer Mercieca, an expert on rhetoric and author of "Demagogue for President: The Rhetorical Genius of Donald Trump," for her insights. She responded by email:

War rhetoric typically combines ad baculum (threats of force), reification (treating people as inhuman objects), and ad hominem (personal attacks, name-calling), scapegoating (placing the blame for problems on the dehumanized other) and victimage (we are innocent, but under threat). The combination of these features is thought to prepare a nation or people to hate, fear and despise an enemy so that it will be motivated to war.
In other words, Carlson is relying on war rhetoric, while at the same time telling his audience to fear what he describes as the "war rhetoric" being used against them.
Politics is not warfare. People who hold different political or policy positions are not enemies.
But the overarching narrative of Fox News is just that: Politics is war and Democrats are the enemy.
It's really irresponsible and dangerous propaganda.

These threats of political violence and terrorism should not be understood as a joke, as a "gaffe," as "strong language" or hyperbole or with some other euphemism intended to downplay their intent and meaning. Violence is one of the main weapons used by fascists in their assault on democracy. In response to these escalating threats, the Democrats, the mainstream news media, and other elites prefer to continue their set of self-delusions about a return to "normalcy" and a naive belief that widespread political violence cannot happen in the United States in the 21st century.

Many of these elites and other influentials — like the American people at large — have been exhausted, intimidated and traumatized by the Age of Trump and its perfidy. Their response, however, is unacceptable: a state of denial about the existential threat to American democracy and society embodied by Trumpism and ascendant neofascism.

Donald Trump, the Republican Party and their followers consistently, transparently and directly continue to show the world who and what they really are. Denial of this reality is not salvation. It is only a pathway to doom. Unfortunately, too many Americans are wrapping themselves in denial as if it were armor — or, more properly, a security blanket — instead of facing a worsening situation and rising to the challenge.