Today we saw the release of the first batch of images taken by the James Webb Space Telescope. This is something we have both been waiting on for nearly 25 years. Back in those days, we were analysing the first Hubble images of the distant universe, and the details they revealed were shocking compared to anything we’d seen in ground-based images.

It seems the bar has been raised once again, and Webb is set to herald a new age for astronomy and space research. Its large mirror helps it produce images that are two to three times sharper than Hubble’s, and which go much deeper into space (which means it can see fainter sources).

Webb can also see far redder infrared wavelengths, opening up a new view on the universe. This is especially important to study the early universe due to “cosmological redshift”, a process which refers to the stretching of light (with the expansion of the universe) as it travels across cosmic space.

It’s also useful for studying fascinating sources such as planets going around nearby stars, and the regions where stars form.

We’ve written before about the tremendous technical challenges involved in the construction of Webb and its journey into orbit. Now, with the long-awaited first images in our hands, let’s take a look at what they show.

In a sneak peak, US President Joe Biden presented the very first image of Webb’s “deep field”. This is the massive galaxy cluster SMACS-0723 that contains thousands of galaxies clustered around a central super-bright galaxy squatting at the centre. 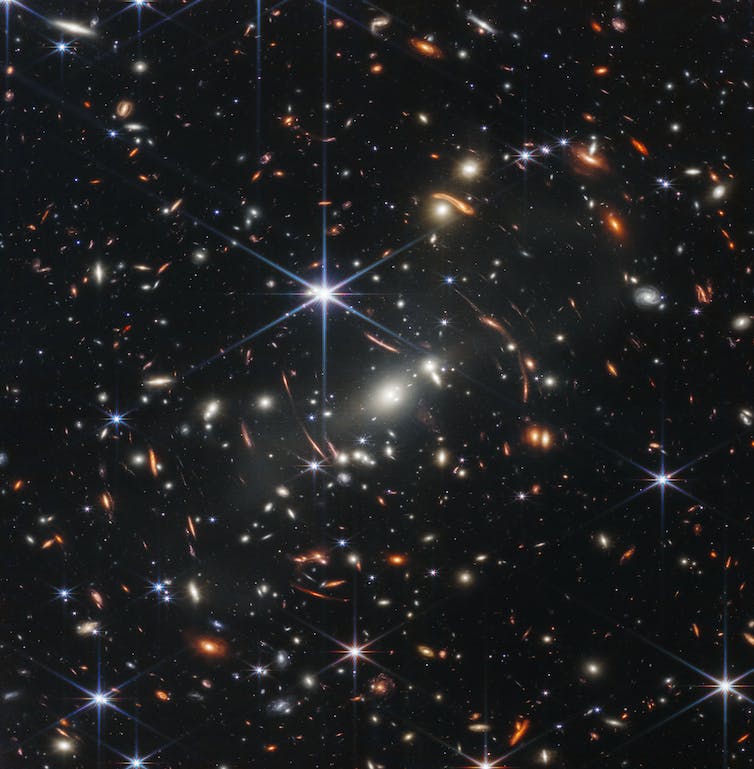 The giant southern cluster SMACS 0723 was captured by Webb.

You’ll immediately notice the many elongates arcs, representing background galaxies which have been “gravitationally lensed” as a result of the cluster’s mass. In other words, the huge forces of gravity at play have resulted in the light from the galaxies becoming distorted (stretched) and amplified, providing a highly enhanced image of the distant universe.

The clarity is astonishing, especially in terms of the structure of the lensed images. Here’s a zoomed-in look at one tiny region, compared with an image of similar exposure time from Hubble:

A comparison of Webb (left) and Hubble (right) in their view of the same region. This is a zoomed-in area of the Webb deep field.

Adapted from images by NASA, ESA, CSA, and STScI

The enlarged images above portray a region in the deep field containing a spiral galaxy astronomers have affectionately been calling “The Slug”. It’s located several times further than the SMACS-0723 cluster.

But our eyes were drawn more to the very thin arc just above (marked with arrows). This little sliver demonstrates Webb’s power. This arc was barely detected by Hubble, but Webb sees the “beads on a string” clearly. They are likely individual star clusters in the extremely distant, tiny galaxy.

We can see similarly amazing details all over the deep field. For point-like objects, Webb is expected to be beyond 100 times more sensitive than Hubble, and this definitely demonstrates that.

The field is also scattered with some faint red objects, which are already attracting attention by experts. Some of these could potentially be the most distant galaxies, where the light has taken the longest to reach us.

Webb is also capable of extremely sensitive infrared spectroscopy, where light is broken down in wavelengths to reveal the composition of an object.

While Hubble is very poor at this, Webb manages to do this nicely – shown below by the spectrum of the massive planet WASP 96b. Located some 1120 light-years away, this planet weighs in at about half the mass of Jupiter. 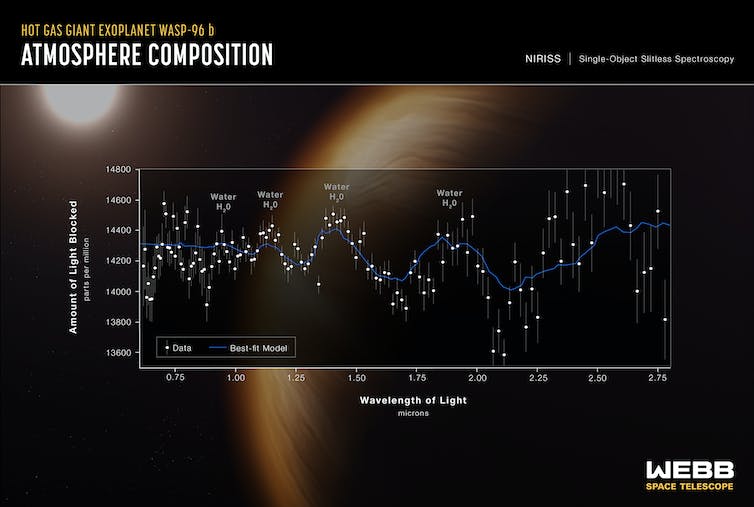 The dips in the spectrum reveal the presence of water vapour in the planet’s atmosphere. Now, WASP 69b is unlikely to harbour life because of its proximity to its parent star. Yet this demonstration is very exciting since the same method can be applied to the 5,000 or so other known exoplanets.

With spectroscopy, we’ll eventually be able to detect potential signatures of life such as ozone and methane.

The third image is of the Southern Ring Nebula, about 2,000 light-years away in the Milky Way. This image shows off Webb’s mid-infrared capability (which is again well beyond Hubble’s range).

The Southern Ring planetary nebula, with a near-infrared image on the left and a mid-infrared one on the right.

It’s a classic example of a “planetary nebula” (a misnomer since no planet is involved) in which the central star has transformed into a tiny white dwarf by blowing off its outer layer. This happens at a speed of about 15 kilometres per second, sending out rings of gas and dust.

The brightest star in the centre is actually a companion star, and the white dwarf is the fainter partner which can only be seen in the mid-infrared since it’s obscured by dust. The mid-infared also highlights the dust being formed in the expanding gas.

The fourth image below shows us Webb’s view of nearby galaxies. Here we see a famous galaxy group called Stefan’s Quintet, located about 290 million light-years away. The five galaxies are in close proximity. Four are interacting with each other and triggering abundant star formation. 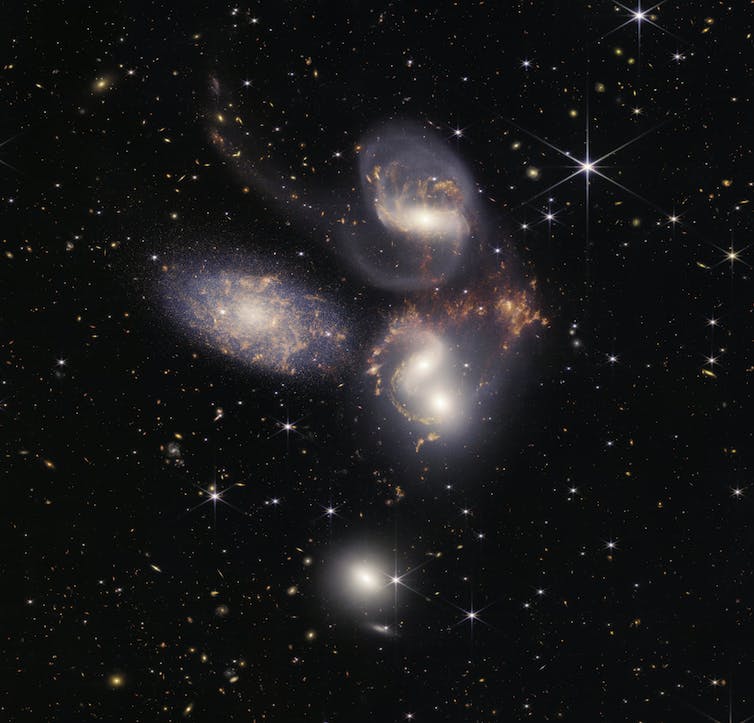 Stephan’s Quintet is a compact group of interacting galaxies.

The red streaks and clumps show the location of new star formation via the associated dust. The detail of the dust distribution and the tug-of-war taking place between the galaxies leaps out from the image. And the mid-infrared reveals light from a supermassive black hole in the centre of the top galaxy.

What also stands out is the vast sea of distant galaxies in the background. We expect to see this in every Webb image, even when Webb points to sources within the Milky Way. That’s because infrared light passes through dust. Webb’s infrared-detecting capabilities are so sensitive it will see right through objects within our galaxy.

This means distant background galaxies will be photo-bombing every Webb image. See if you can spot them in the Southern Ring and Carina images.

And finally, we have Webb’s homage to Hubble’s famous Pillars of Creation image. 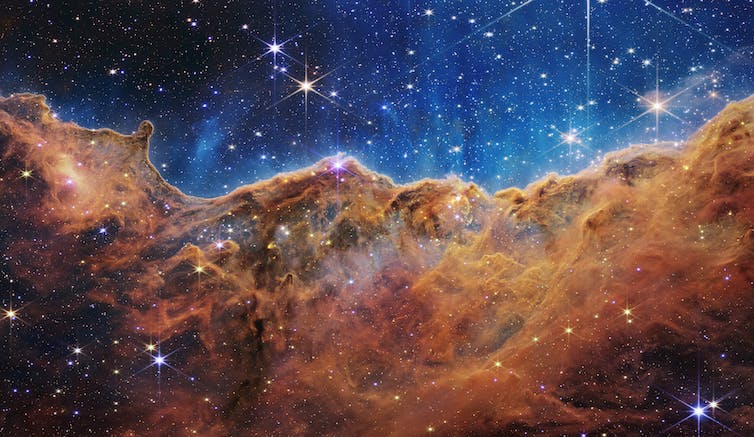 The Carina Nebula, a cosmic nursery cocooned in gas and dust.

This infrared view shows the Carina Nebula, a stellar nursery of gas and dust 7,600 light-years away where new stars are forming and destroying their birth cloud.

The image is extremely complex, and the intricate swirls of dust, gas and young stars are jaw-dropping. It will probably take astronomers many years of hard work to figure out exactly what’s going on here.

Just this handful of preview images, a few days work for Webb, have given astronomers tremendous amounts of new data that will drive years of research. And that’s just the beginning.

The Republican nominee for Secretary of State in Arizona complained about the "paparazzi chasing me out of the building" follow a Thursday evening debate.

Since the start of his campaign for Senate in Pennsylania, former celebrity TV host Dr. Mehmet Oz has been plagued with ridicule and criticism over the fact that he has for years lived in New Jersey and has a tenuous connection to the commonwealth.

On Thursday, New York Post Albany correspondent Zach Williams reported that one unlikely person made a joke about it at a meeting of the New York State Business Council: former Republican New Jersey Gov. Chris Christie.