UFOs are no laughing matter for us: behind the scenes of France’s real life ‘Ovni’ hunters

In France, the Study and Information Group on Unidentified Aerospace Phenomena (GEIPAN), has been investigating unidentified aerial phenomena (UAPs) – more commonly known as UFOs – for the past 45 years. Attached to the National Centre for Space Studies (CNES), GEIPAN has been invited by NASA to present its activities and working methods before a newly established independent team that will study data and set up methods to analyse unusual phenomena observed in the sky.

Set up in 1977, GEIPAN is a team of four experts tasked with gathering witness accounts, conducting surveys, publishing studies, managing computer systems and overseeing the organisation’s operations. A technical department at CNES, it relies on outside personnel, expertise and talent, liaising with numerous investigators, experts and institutions, including France’s Air Force, National Gendarmerie and Police Force, the Directorate General for Civil Aviation, the National Centre for Scientific Research (CNRS) and the weather service Météo-France. 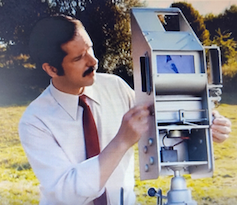 The existence of a “UFO Force” in France has entered the country’s popular imagination in recent years, with the Canal+ comedy drama series Ovni(s) – the French term for UFOs. In its quest for realism, the series depicts equipment used for GEIPAN investigations, including the “SimOvni”, which we use to create simulations of the phenomena described in eyewitness accounts.

What exactly is a UAP?

Unidentified aerial phenomena are unusual events observed by eyewitnesses that are seemingly inexplicable. They most often take the form of a bright light.

Simple explanations can be found for over 60% of UAPs – they are usually paper lanterns, party balloons, hot air balloons, aircraft, satellites, meteorites, stars, planets and so forth. While these occurrences may seem straightforward or banal, it is important to remember that every one of these recorded sightings presents some strange, unique, or noteworthy aspect. GEIPAN gathers 700 eyewitness reports annually, with 150 to 200 remaining as open investigations. Anyone is able to submit a report using the form on the GEIPAN website.

An event’s apparent peculiarity may be dependent on the environment and conditions of the sighting. These might involve low-light conditions, an absence of sound, atmospheric turbulence causing a star to twinkle strangely, or sunlight reflecting off a distant aeroplane.

[Nearly 80,000 readers look to The Conversation France’s newsletter for expert insights into the world’s most pressing issues. Sign up now]

There are also more spectacular sightings, such as the appearance of meteorites breaking up in the atmosphere. One such atypical event was when the Starlink satellite cluster entered into orbit, giving rise to multiple reports of bright spots moving in a row, and others of a “glowing orb”. The series of spots were the 50 to 60 satellites themselves going into orbit, sighted at sunset or sunrise when the sky was darker and the sun was reflecting off the satellites. The orb corresponded to the second stage of the Falcon 9 rocket, which launched the satellites into orbit. Propulsions from this spacecraft every one to two seconds created a bubble of gas, which then appeared as a luminous sphere in the night sky under the light of the setting or rising sun. Alongside this sphere a shining spot, sometimes shaped like a butterfly, caused the removal of the remaining oxygen and kerosene from the rocket’s second stage before it re-entered the atmosphere. 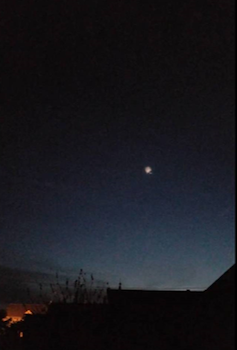 Sighting of the Falcon 9 rocket as documented by GEIPAN.GEIPAN, Author provided

UAP reports can also be the result of a simple misinterpretation. An amateur astronomer might capture a high-quality image of a bright flash in the sky, but popular astronomy apps would not possess enough data to offer an explanation. In this case, only the CNES internal space surveillance department could prove the presence of the stage of a rocket reflecting the sun’s rays. Even the flickering candle of a paper lantern may be perceived as an object whizzing through the sky at extreme speed.

To understand and explain the observations that the GEIPAN receives, we rely on tools and applications across a range of domains, from aeronautics to aerospace (for satellites and debris), astronomy (for stars and meteorites), meteorology, image processing and more.

Reasonable explanations are found for around two thirds of the observed phenomena, but the remaining third remain unresolved due to a lack of information to analyse the report and produce an explanation. Then there are the “D cases”, accounting for around 3%, whereby we have enough information but have not found an explanation. This is when we deem all the hypotheses that we have formulated and analysed to be inconclusive.

GEIPAN’s goal is clear: to present or attempt to present a rational answer for the misunderstood, unusual and sometimes spectacular occurrences spotted by witnesses, and to explain the reasons for their presumed irregularity.

There are three main phases involved in achieving this goal. In essence, we collect eyewitness accounts, conduct technical studies and publish analysis reports on the GEIPAN website, while always protecting eyewitness anonymity.

Working together with NASA’s body independent experts over the coming months, France’s GEIPAN will detail its methods and share data. This will allow both groups to explore phenomena that resist easy explanation, examine related aerial hazards, and draw up recommendations for future research.

Translated from the French by Enda Boorman for Fast ForWord and Leighton Kille of The Conversation France.

'They are going to slam this judge': Experts say appeals court will shut down Trump judge’s 'circus'

Samaa Khullar, Salon
Legal experts predicted that the 11th Circuit Court of Appeals will soon shut down the special master process in the Mar-a-Lago probe that was ordered by U.S. District Judge Aileen Cannon.

The special master process ordered by Cannon, a Trump appointee, effectively allows former President Donald Trump to challenge the search warrant at his office and residence before he is indicted — an extremely rare opportunity for a criminal defendant.

The oral argument by prosecutors, who are now under the direction of the newly appointed Special Counsel Jack Smith, shows that the 11th Circuit may be close to reversing Cannon's process. The three judges on the panel — two of whom are Trump appointees — shared their skepticism that Cannon had jurisdiction to take action before an indictment, and that even if she did, she had no factual predicate to appoint a special master.