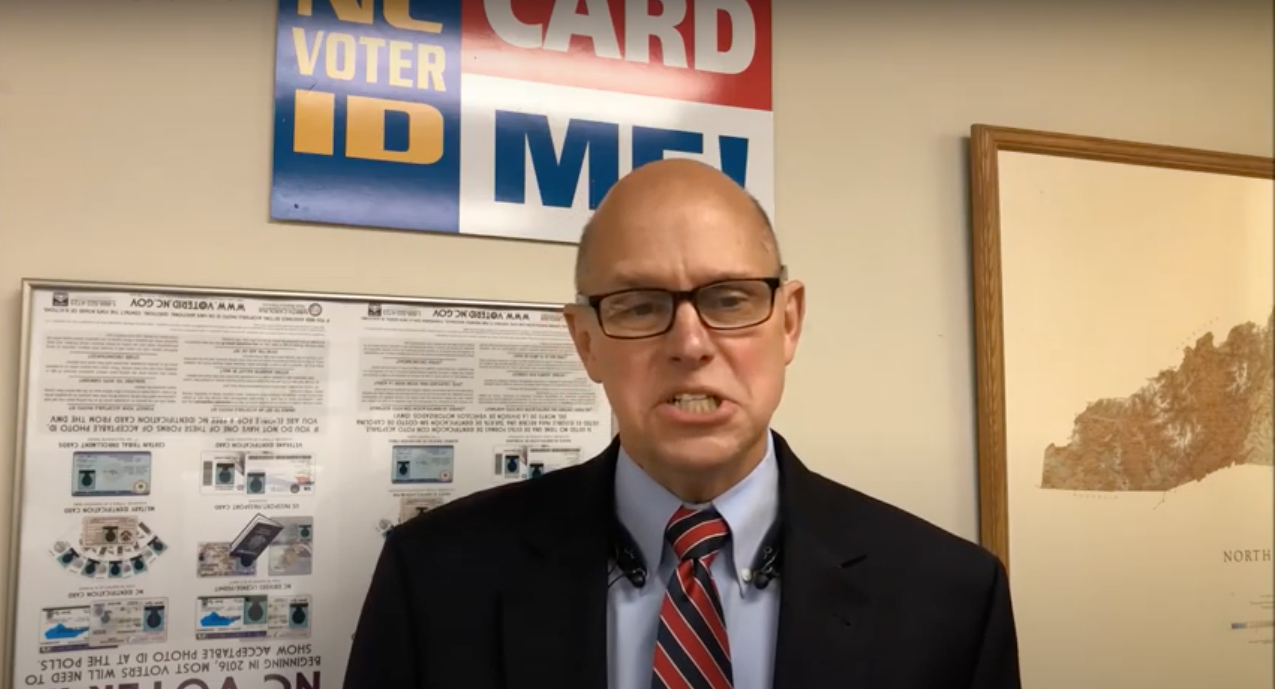 Jay DeLancy, a retired Air Force Colonel with a clean-shaven head and the energetic manner of a nondenominational preacher, stood at the front of a Baptist church in the Appalachian foothills on a recent Saturday afternoon at the conclusion of his presentation on voting by non-citizens.

Complete with a slideshow and self-deprecating commentary, DeLancy's presentation detailed a saga running back almost a decade when his group Voter Integrity Project attempted to challenge dozens of registered voters on the basis of jury excuse forms that indicated they were not citizens of North Carolina. The state Board of Elections had thrown out each of the challenges, and successive efforts to obtain legislation remedies failed. DeLancy said he was also frustrated that after 11 of the cases were referred to Immigration & Customs Enforcement for investigation, nothing seemed to come of it.

"But these people are running around saying, 'There is no vote fraud because, well, there's no prosecutions," DeLancy said. "We'll, have you gotten the gist of how hard it is to get a stinkin' prosecution? Have you gotten that yet? So, it's really hard to get one."

A woman with short, silvery hair raised her hand and stood to speak.

"Do you really think that we — we can't go in and break dishes, and we're supposed to sit back like this — I don't think we've got that type of time," she said during the question-and-answer period at the June 12 "Voter Integrity Bootcamp." Held in the spacious sanctuary at Calvary Baptist Church, about 50 people — almost exclusively white, with the exception of one African-American man — strategized methods for deterring voter fraud.

DeLancy attempted to interject, but the woman continued.

"I really don't," she continued. "My real fear is — and this is coming from someone who's usually pretty calm, pretty cool and collected — I want to go out with a baseball bat and break some dishes and make some things happen. I'm tired of this…. I have a real fear that there's going to be civil unrest amongst what are usually very peaceful people. You can only be pushed to the precipice before — I'm done. I mean, when are we going to go golf?"

Expressing frustration, the woman continued, "I'm still not getting any direct action on what I can do."

"Trust me, that's next," DeLancy told her. "But it's a question of the ballot box versus the ammo box. And I'm trying to avoid…."

"I've got lots of ammo," the woman interrupted.

Asked about whether his message could potentially fuel violence by undermining confidence in elections, DeLancy told Raw Story: "I'm not going to lie to them. I think there's a way to thread the needle to get elections back to something we can be confident in.

"We need a lot more transparency in this," he continued. "If we don't get it, we will lose our republic. We will become another Venezuela if we don't get this solved."

DeLancy, who co-founded Voter Integrity Project in 2011, held up the Arizona election audit as a model for the kind of process he would like to see to restore trust in elections. The Arizona audit has been widely panned for being run by a little-known company with no experience in election audits, concerns about ballots being compromised, and limiting access to the press.

"We'd like to see an audit — an Arizona-style audit," DeLancy told Raw Story. "In the worst-case scenario, people laugh their heads off, and say, 'You wasted all this money for nothing.'

A majority of Republicans — 53 percent — believe, falsely, that Donald Trump is the "true president," according to a Reuters/Ipsos poll conducted in May. In comparison, only 3 percent of Democrats believe the election was stolen from Trump. Put together with unaffiliated voters, the poll found that 25 percent of all Americans buy into the false belief that the election was stolen.

DeLancy's trainings are receiving publicity from the NC State Defense Forces, which describes itself as an "all-volunteer, pro-government, non-partisan civil defense force comprised of currently and formerly serving military, police, first responders and other like-minded legal US citizens." The group, which announced its aim to "assist state citizens learning how to protect elections," says it upholds an oath to "defend the Constitution against all enemies, foreign and domestic and to protect and serve the citizens of North Carolina according to the NC State Constitution in times of need such as natural disasters or local threats to law and order." Another press release, dated Dec. 15, 2020, that is published on the group's website announces: "Oath Keepers in North Carolina joining North Carolina State Defense Forces." It is not clear what, if any, connection the NC State Defense Forces might have with the dozen-plus defendants facing federal charges related to the Jan. 6 storming of the US Capitol. Calls to a number listed on the group's website for this story were not returned.

Two recurring themes in DeLancy's presentations are the notion that voter fraud is widespread and that institutions are unresponsive to efforts to ferret it out. Belying DeLancy's complaint about the difficulty of getting prosecutions when it comes to non-citizens voting — which had prompted the woman at his training in King to say she was ready "to go out with a baseball bat and break some dishes" — was a fact that went unmentioned in his presentation: Federal prosecutors under both Trump and Biden have announced indictments of dozens of North Carolina residents accused of voting as non-citizens, including 19 in August 2018, another 19 in September 2020 and, most recently, 24 others in March 2021.

Since the launch of the Voter Integrity Project in 2011, DeLancy has cultivated relationships among far-right Republican lawmakers in the NC House, including Rep. George Cleveland. Bob Hall, a voter-rights watchdog who often winds up on the opposite side in legislative fights, confirmed DeLancy's account that the Republican leadership doesn't always go along with him.

"He's more extreme than what the leadership wants," Hall said.

DeLancy framed his presentation on non-citizens voting at the June 12 training as a tale of heroes and villains. He suggested his audience would probably deem Democratic Gov. Roy Cooper, who vetoed a bill requiring local clerks of courts to share jury excuse forms with election offices, as the villain. But DeLancy offered a counterintuitive alternative, showing a slide with Cooper's faced X-ed out, alongside that of Republican Senate President Pro Tem Phil Berger. With Berger leading the Senate, the bill remained bottled up in committee when the Republicans had a veto-proof supermajority, DeLancy pointed out.

"Cleveland understood what [the legislation] was doing," DeLancy recounted on June 12. "My fingerprints were not on that bill. Cleveland put it through. He said, 'Should I name it 'Voter Roll'? I said, 'No, no, no. It's about jury excusals, interagency cooperation, that's all.' And he did it. He framed it that way."

The legislation supported by DeLancy would have also made the jury excuse forms into public records.

"That's a huge concern," Hall said. "In addition to the fact that the data is not reliable, you're giving an overworked staff at the county board a bunch of bad data. There's no penalty for someone to write, 'I'm not a citizen of the state,' to get out of jury duty. It's not a felony or a misdemeanor. People can write all kinds of things."

While DeLancy found Berger, the Republican leader of the state Senate in North Carolina, to be unreceptive, his view of other Republican officials across the country has likewise dimmed.

DeLancy told Raw Story that at one time he believed voter fraud primarily benefited Democrats. That changed during the 2020 election.

"I just find it mighty interesting that Trump was winning those key battleground states that had those large dumps of votes after midnight," DeLancy said. "You get a massive number of ballots that suddenly show up that swing the election conveniently against Trump."

The phenomenon DeLancy described was widely predicted by election observers who had noted that early returns would tend to favor Trump, while later surges of write-in and absentee votes — a method more widely embraced by Democratic voters — would benefit Biden. DeLancy indicated he's well aware of the theory, accurately identifying it as the "Red Mirage."

DeLancy said he's teaching citizen volunteers at the Voter Integrity Bootcamps to canvass voter rolls to try to identify illegal voters. By having volunteers knock on doors at addresses for voters listed as "inactive," he hopes to gather signed statements from witnesses attesting that these voters no longer live at the addresses where they are registered. He said his group will exercise "all options, to include challenging those voters if they show up at the polls."

The two trainings held so far this year by Voter Integrity Project have taken place in Republican-dominated areas, first in Waynesville on April 24 and then in King last weekend. But three trainings scheduled for next month are aimed at Democratic strongholds in Fayetteville, Raleigh and Durham.

During the recent training in King, DeLancy acknowledged the presence of a reporter and made sure everyone in the audience was also aware of it. But he did not temper his remarks.

During a digression on the topic of undocumented people traveling to North Carolina to obtain driver's licenses before the DMV stopped the practice in 2006, DeLancy complained about a TV news story that was too positive for his liking.

"There was just a friendly story about these people who came flooding in from Atlanta in a van," he said. "Couldn't speak a lick of English, but they were getting that license before they had to provide their citizenship. And only in TV-land in Charlotte is this something to celebrate."

Then his voice rose in a growl that revealed his frustration about the way he imagined he and his allies would be perceived because they weren't comfortable with undocumented people obtaining licenses to legally operate motor vehicles.

"But people like you who are obviously white supremacists, people like you are appalled by it," DeLancy said. "And it's like, come on. Come on, guys. Can't we defend our country? Aren't we allowed to have borders?"

Correction: An earlier version of this story included a quote from Bob Hall referencing a video depicting a group accosting an individual who turned out to be a qualified voter. Hall said, upon reflection, it was a different group, not Voter Integrity Project, that carried out the stunt. The quote has been removed from the story.