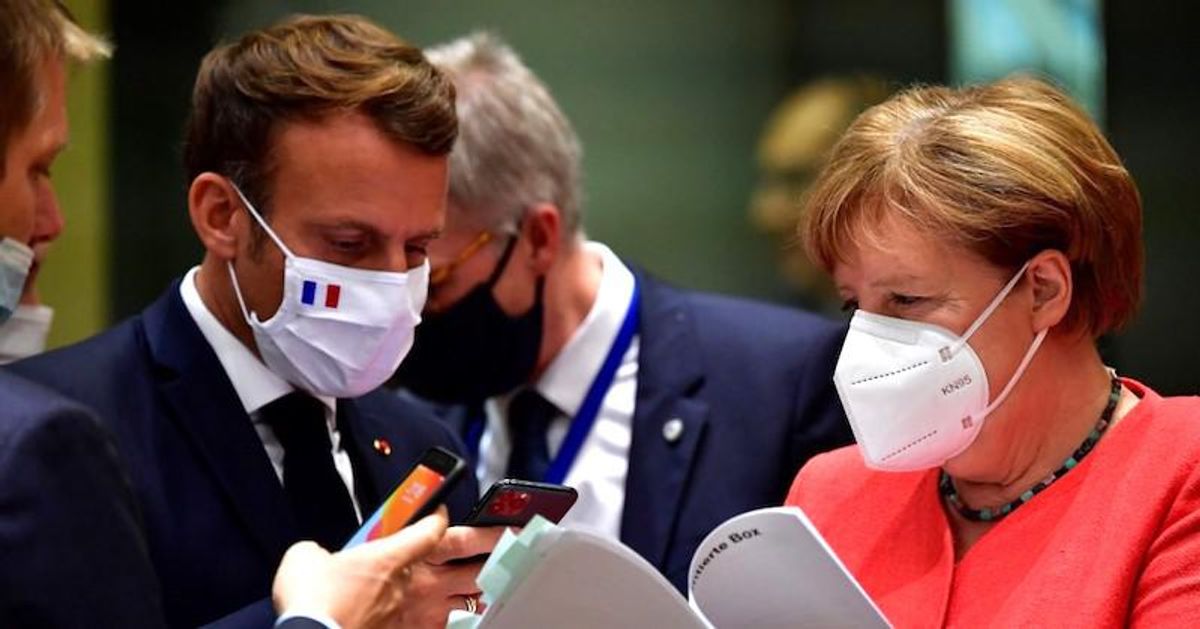 French President Emmanuel Macron takes photos with his smartphone from a document held by German Chancellor Angela Merkel during a summit in Brussels on July 20, 2020. (Photo: John Thys/Pool/AFP)

To preserve its stranglehold over global vaccine production, the pharmaceutical industry's army of lobbyists is waging an aggressive campaign to prevent European nations from supporting a temporary patent waiver backed by more than 100 nations around the world and recently endorsed by the United States.

"There are several hundred lobby consultancies in Brussels, and over 65 firms have lobbyists with permanent access passes to the European Parliament."
—Corporate Europe Observatory

"The public is being left in the dark as to the demands, influencing strategies, and full firepower of the Big Pharma lobby at a time when the debate over who gets to keep monopoly control of Covid-19 patents is raging," the watchdog group said. "The stakes simply couldn't be higher."

CEO found that the the European Federation of Pharmaceutical Industries and Associations, Big Pharma's most prominent E.U. lobby group, ramped up lobbying spending by around 20% in 2020 as the pandemic raged across the globe and developing countries struggled to launch vaccination programs.

Those struggles continue in the present as pharmaceutical companies cling to their lucrative patent monopolies, barring the production of generic vaccines to boost the artificially scarce global supply while enriching their executives and shareholders.

Helping pharmaceutical companies to perpetuate deep inequities in vaccine distribution—described as "vaccine apartheid" by many observers—are powerful European nations such as Germany, the United Kingdom, and France, which have thus far refused to join the U.S. in supporting the waiver proposal first introduced at the World Trade Organization last October by India and South Africa.

As CEO noted in its new report, "mega-philanthropist Bill Gates and the pro-patent lobby are a powerful force influencing the E.U.'s response." Supporters of the patent waiver and other means of vaccine technology sharing, meanwhile, "face closed doors" in much of Europe, the watchdog group said.

"Figures highlighted by Deutsche Welle showed an extreme imbalance between opponents and proponents of the vaccine patents waiver: 140 meetings with pharma companies and their associations, 18 meetings with generic companies, and only one meeting with pro-waiver groups," CEO noted.

According to the new analysis, "pharma companies and lobby groups report employing a whopping 290 lobbyists (an estimated 104.75 full-time lobby jobs), and this figure does not include the 'hired gun' lobbyists at lobby consultancies."

CEO's effort to shine light on Big Pharma's secretive and influential lobbying campaign comes just days before members of the European Parliament are set to decide the institution's formal position on the patent waiver, which has garnered high levels of public support across Europe. During a debate over the waiver last month, MEPs were split over whether to support the proposal.

Meanwhile, as Reuters reported, "negotiations reopened at the WTO on Monday, focused on a highly anticipated revised [patent waiver] draft submitted by India, South Africa, and dozens of other developing countries last week."

"A surprise U.S. shift earlier this month to support a patent waiver heaped pressure on remaining opponents like the European Union and Switzerland that are home to numerous drugmakers," Reuters noted. "But Monday's discussions—the 11th session since the initial waiver proposal in October—failed to achieve a breakthrough."

The WTO's TRIPs Council is scheduled to meet in Geneva next week to discuss the patent waiver. To win final approval, the proposal must receive unanimous support at the WTO—an uphill climb amid continued opposition from European leaders, Canada, and other rich nations.

As coronavirus cases and deaths remain high in countries that have had difficulties vaccinating their populations due to supply shortages, intellectual property barriers, and other factors, experts warned of dire consequences for the world if the patent waiver talks remain stagnant.

"Internationally, there's a real risk that the European Union could make this drag out, that their actions in Geneva and at the World Trade Organization could lead to a serious delay," Kenneth Haar, a researcher at CEO, told The Daily Poster on Tuesday. "That's a huge problem because time is of the essence."