‘Diversity’ is not the solution -- dismantling white supremacy is

Race has been a mainstay in the media this year. Everyday there is another racism story in the news, on a podcast, trending on Twitter or being joked about on late night television

As a critical race educator and activist I have spent most of my life inserting race into the conversation. You would think this focus would have me thrilled. Finally everyone is talking about race.

Not only are people talking about race, they are talking about critical race theory (CRT) and having important conversations about the role of systemic racism in our country and across the globe.

This sudden interest in CRT is largely due to former U.S. president Donald Trump's now defunct executive order banning the teaching of critical race theory in school. Since then many states have taken up similar policies.

What is critical race theory?

CRT started as a legal theory that illustrates how racism becomes institutionalized, even though discrimination is illegal. It has since branched out, but the essence remains — to show how race and racism continue to operate across various systems, interrogating their role in society.

As American policies on CRT education in schools shows, the problem has become showing how racism operates instead of racism itself. Mainstream society becomes fearful that people will be able to articulate the ways in which systemic discrimination operates and as a result demand that we do better.

This is convenient because it upholds the foundations of mainstream societal concepts like white supremacy and capitalism. And by white supremacy I don't mean white supremacists, like the angry rioters in MAGA hats that stormed the U.S. Capitol. I mean the ideologies of white supremacy, the implicit systems that maintain whiteness as superior and allow for situations like George Floyd and Joyce Eschanquan as matter of fact aspects of existence with little to no consequences. 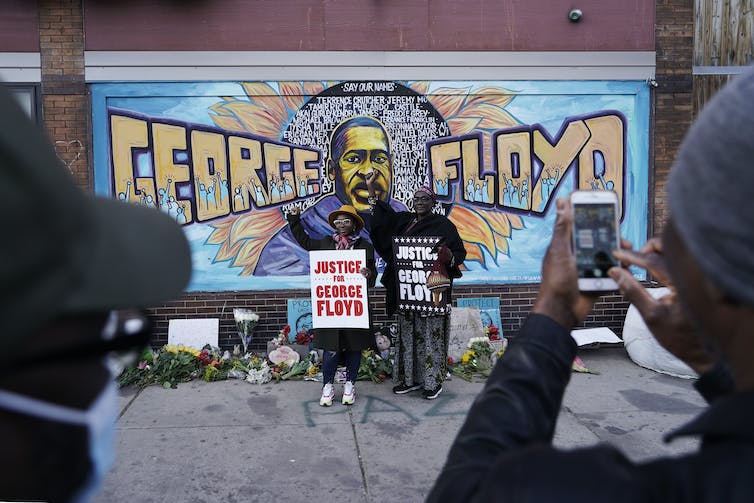 People stand in front of a mural for George Floyd after a guilty verdict was announced at the trial of former Minneapolis police Officer Derek Chauvin for the 2020 death of Floyd.

CRT has simply become the latest target of white supremacy. But as you may guess, CRT is not the problem. The problem is diversity.

The solution to every problem

Progressive folks take up “diversity" like it is the solution to every problem. We are bombarded with it through committees, policies and “commitments." You see it everywhere from public institutions to private corporations.

Even Canada's iconic Hudson Bay Company (HBC) has been embroiled in a recent diversity scandal. While HBC was collecting donations for a campaign to “empower" Indigenous people, Black people and people of colour across the country, they used the image of Hadiya Roderique, a prominent Black lawyer in Toronto, without her permission.

HBC became so blinded by their diversity mission they forgot to use diversity principles in their promotion. As a public we are inundated with images and information of different organizations and corporations attempting to advance diversity initiatives, when really it has simply become a public relations call to capitalize on woke culture.

If HBC was actually trying to enact change for Indigenous people, Black people and people of colour, they would know that this cannot be achieved by asking individual customers to donate $5.

Instead, the corporation would have to acknowledge the systemic, institutional and residual effects of racism and white supremacy embedded in our country and as a result, their corporation. They would also have to put their money where their mouth is.

And all of this would need to be measured and calculated to ensure progress was being made — and not some vague promise with no material evidence.

In her book On Being Included: Racism and Diversity in Institutional Life, Sara Ahmed shows how diversity is another tool of white supremacy. Ahmed highlights that as diversity advances in institutions, it is operating exactly the way it is supposed to: to do absolutely nothing and thus maintain the status quo.

Diversity has become a way to appease the masses and occupy people like me, the critical race agitators so we chase diversity up the chain of command instead of demanding radical change. Instead of starting a revolution.

So whether the conservative target is critical race theory, anti-racism, Black Lives Matter movements or anything else — the problem will remain until we remove diversity from the solution pile and fundamentally change white supremacist systems.