‘What is the sedition caucus saying now?’: GOP slammed for demanding Capitol fencing be removed after latest deadly attack 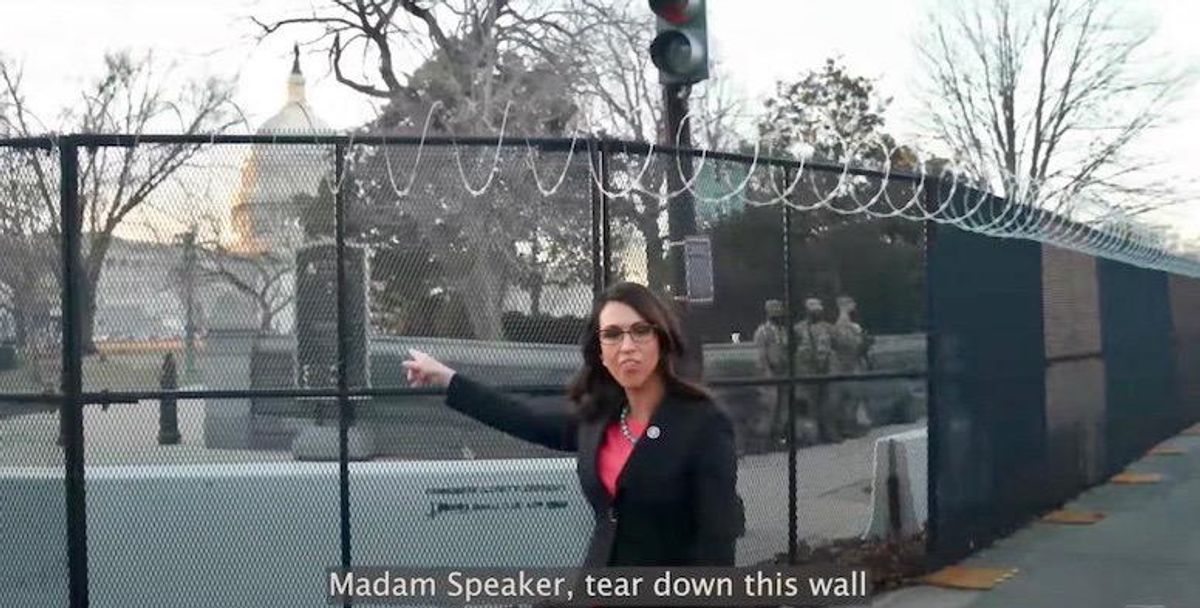 Republicans are being highly-criticized for spending the past several months demanding the security measures enacted after the January 6 insurrection, including additional fencing, be removed – claiming there is no longer any danger or threat.

Friday afternoon a man rammed his car into a Capitol Hill barricade, exited and began slashing or stabbing at two Capitol Hill police officers, killing one of them. That suspect was shot and died. The other officer is reportedly in critical condition.

It's time for our National Guard to be sent home to their families, the razor wire wall be removed from the U.S. Capitol grounds, and our great military no longer be used by Democrats as a political tool to harass the press, Congress, and Americans who want to visit our Capitol.
— Rep. Marjorie Taylor Greene (@RepMTG) March 16, 2021

Rep. Lauren Boebert, who was among the most vocal:

The National Guard should be at the border, not at the Capitol.
— Lauren Boebert (@laurenboebert) March 7, 2021

Some of the fencing was removed last week.

More than two months after the January 6 assault on the Capitol, officials have given the OK for security and fencing to be reduced. On Saturday, some of the razor wire on the fence was removed. https://t.co/2CCoRa8Raf pic.twitter.com/blMBIsjB43
— CBS News (@CBSNews) March 20, 2021

Here's how some are responding after today's deadly attack:

A Capitol Police Officer has died. What is the Sedition Caucus saying about the fencing now?
— Paulette Feeney (@PauletteParis1) April 2, 2021

Since just days after the January 6 insurrection, Republicans have been insisting that security measures at the Capitol should be relaxed because there's no real threat
— Aaron Rupar (@atrupar) April 2, 2021

Darrell Issa was whining the other day about the fencing and guards at the Capitol. It's an ongoing litany of grievances by the likes of Issa, Taylor-Greene, and others.
Jan. 6 and today's incident are the reasons why. — Sharon Gibson (@SharonGibson3) April 2, 2021

Soooo...probably not a good time to remove the barricades from around the US Capitol, right?
— ReallyAmerican.com 🇺🇸 (@ReallyAmerican1) April 2, 2021

Republicans who pushed the Big Lie, incited an attack on the Capitol and then complained for months that there was too much Capitol security will fall silent for a few hours after this new attack. And then they'll start all over again.
— Mark Jacob (@MarkJacob16) April 2, 2021

As we observe the horrific event at the US Capitol today, let's remember all of the Republicans that attacked and criticized Nancy Pelosi for the additional security measures she put in place.
These are bad, bad people. The GOP is America's worst enemy. — Jack©️ (@Jackasaurus3) April 2, 2021

According to a report from Politico, a former girlfriend of Rep. Matt Gaetz (R-FL) is in a panic that she may be drawn into his legal woes after speaking on the phone with the woman who is reportedly the key witness against him in the investigation into his possible involvement in sex trafficking.

The report from Marc Caputo and Matt Dixon states that "The revelation raises the possibility that federal prosecutors have two top cooperating witnesses: the woman who was an alleged sex-trafficking victim when she was a minor," as well as longtime Gaetz pal Joel Greenberg who is reportedly working on a plea deal with investigators.

According to the report, Gaetz's ex -- whose name is not given -- has spoken with friends and expressed fear that she was recorded in an attempt to get more information about her former boyfriend.

"Two of her friends, who declined to be identified publicly because of the sensational nature of the case, say she now suspects she was being set up when the alleged victim and another woman involved in the case called her to discuss the lawmaker in what she fears might have been a recorded conference call. The call took place sometime after Greenberg was indicted for the sex crime in August," the report states, adding, "The friends did not provide details about exactly what was discussed, but one recounted that Gaetz's ex-girlfriend said she was opposed to talking to authorities and is now worried that prosecutors might try to charge her with obstructing justice in order to get to Gaetz."