What the Uvalde Police department is hiding: White power killed those kids

John Stoehr
An officer walks outside of Robb Elementary School in Uvalde, Texas, May 24, 2022. (Allison Dinner/AFP)

Texas law enforcement authorities said last week that Salvador Ramos got into Robb Elementary in Uvalde, Texas, by way of a door propped open by a teacher. From there, they said, Ramos found a classroom with two teachers and 19 fourth-graders. He shot them all to pieces.

The same officials said Tuesday the door was not propped open. Nor was it propped open by a teacher. Instead, the teacher closed it. The problem was the door didn’t lock, they said. That’s how Ramos got in.

The presumption is that we’ll believe this.

Together, these impressions provide cover for the Uvalde police’s breathtaking incompetence and cowardice. Federal agents were prepared to take the shooter down. Local cops wouldn’t let them. Only after mothers wailed in despair at the sound of gunfire inside the school did Border Patrol officers storm the school and kill Ramos.

Even so, this new detail might seem credible if not for this: mere hours before it was announced, news came of the Uvalde police deciding to no longer cooperate with state authorities investigating their response to mass murder. Cop shops do this when they have something to hide.

What are they hiding?

Uvalde is a segregated city, according to Neil Meyer, a former attorney who grew up there. On one side are the brown people. They are far and away Uvalde’s majority. The town’s population is 15,000. Nearly 80 percent identify as Hispanic or Latino. They are poor. They are working class. One in three lives in poverty. They vote Democratic.

On the other side are white people. They have more money and property. They own the biggest business. They employ the most people. They control the government. They vote Republican.

And they have the most guns.

Meyer, in a Post op-ed, said that “you would be challenged to find a more heavily armed place in the United States than Uvalde."

It’s a town where the love of guns overwhelms any notion of common-sense regulations, and the minority white ruling class places its right-wing Republican ideology above the safety of its most vulnerable citizens — its impoverished and its children, most of whom are Hispanic.

As if to illustrate who’s really in charge, the news conference the day after the shooting was presided over by an all-white panel, including the state’s governor. This despite the fact that the police chief, the sheriff and the head of the school district’s police are all Hispanic. Other than a few statements, they were and have remained silent.

In such a setting, in which the orders of power are fixed and explicit, those at the bottom have virtually no say while those at the top have a monopoly on what is said. If they say the Uvalde police department is blameless in the massacre of 19 innocents, the expectation is for the rest of Uvalde – that vast majority of brown people – to believe it.

Meyer says it’s no surprise Salvador Ramos bought a couple of semiautomatic rifles at Oasis Outback, a hunting supply and gun shop popular with “wealthier Uvaldeans,” meaning white Uvaldeans. More significant is the place of Oasis Outback in the city’s orders of power.

You could say, as Meyer does, that “the establishment’s deep cultural reverence for guns, hunting and the Wild West mythology” is why no one batted an eye when, for his 18th birthday, Ramos bought guns.

But you could also say, I think more accurately, that Ramos was buying a place for himself in the city’s fixed and explicit orders of power. The extremely lax gun laws in Texas allowed him to buy racialized status.

The oppressed have no illusions about political power growing out of the barrel of a gun, because much of their lived experience of political power is spent in front of one. Ramos was brown. He would never be white. But he could buy the greatest symbol of white power in America. Perhaps, for once in his life, whiteness might work for him.

So far, the story of the Uvalde massacre is that Ramos walked into Robb Elementary despite carrying one of his semiautomatic rifles. (He had left the other one in his truck, evidently.) The school district’s on-site cop should have seen that he was a clear and present danger. Yet Ramos got into the school, according to the Post, “unobstructed.”

The story is backward. Ramos didn’t get in despite being armed. He got in because he was armed. I do not mean he scared police. I mean he seemed to be a “good brown people.” He wasn’t an “invader,” trying to “replace” white people. He got in “unobstructed” because being armed meant he was harmless, even safe. He seemed to be trying to be white.

And, for once, whiteness worked for him.

And for once, the city’s majority of brown people, including parents now insane with grief, is speaking in ways otherwise impossible when the top of the orders of power has a monopoly on what is said.

Uvalde cops loitered for an hour. They stopped the feds from taking Ramos down. They handcuffed one mother for trying to save her children’s lives. (She eventually did.) They tased a father for trying to do the same. They acted, generally, as if saving a brown child from the slaughter was not worth the price of Uvalde’s police officers, who are, by dint of having most of the guns, the embodiment of white power.

To those at the top of the orders of power, getting the majority to believe it wasn’t the cops’ fault, but instead the school’s fault, is pretty much an existential task. Making room for the voices of a brown majority – which is making room for democracy – is tantamount to sabotaging from within the orders of white power they profit from.

So the custodians of white power must reclaim their monopoly on public information. Last week, gubernatorial candidate Beto O’Rourke scolded Governor Greg Abbott. The intensity of the reaction to his airing of the truth illustrates what’s at risk in the massacre’s aftermath.

“This [massacre] is on you until you choose to do something different," O'Rourke told Abbott during a presser. “This will continue to happen. Somebody needs to stand up for the children of this state or they will continue to be killed just like they were killed in Uvalde yesterday.”

Said Don McLaughlin, the white mayor of a city in which 80 percent of the population is brown: “I can’t believe that you’re a sick son of a bitch that would come to a deal like this to make a political issue.”

This is what the Uvalde police department is hiding. 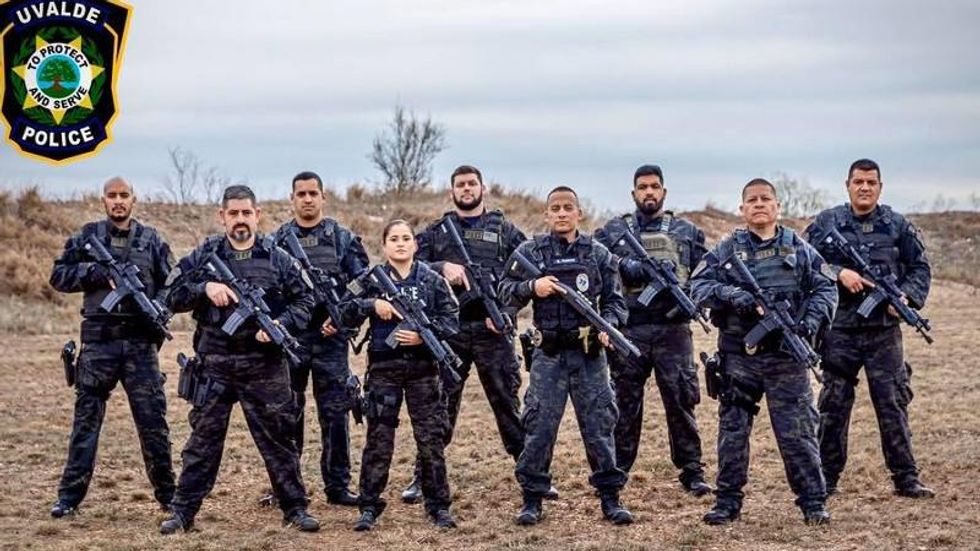