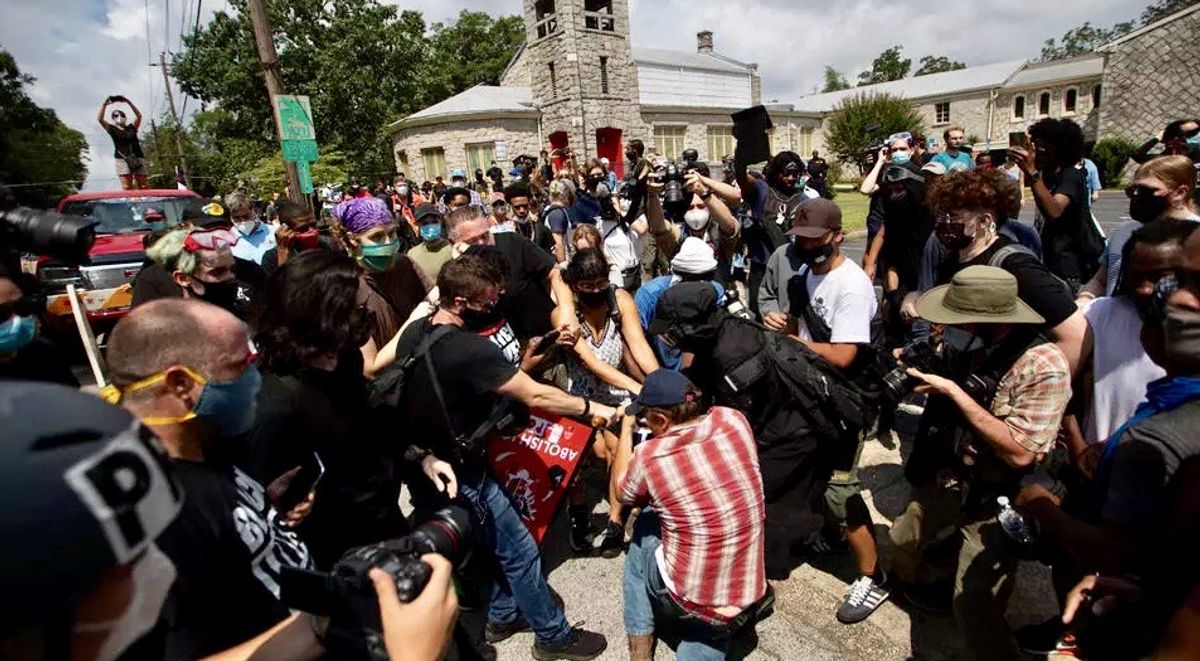 People fight around a Confederate flag during an extreme-right rally and left-wing counter-demonstration at Stone Mountain, Georgia, on August 15, 2020 Logan Cyrus AFP/File

Patterson goes on to say that efforts to overturn the democratic results of the 2020 presidential election underscore the authoritarian nature of Trump's movement.

"Consider the predicates of nascent fascism," Patterson writes. "Trump relentlessly exploited a sense of decline, humiliation and victimization among marginalized Whites, even as he evoked America's loss of strength and purity. His supporters' 'redemptive violence' at our capital was preceded in Michigan, as one example, by armed incursion the state legislature and an abortive effort to kidnap and execute the governor. While claiming to protect democracy, the GOP persistently undermines the right of disfavored groups to vote."

Patterson notes that although there was no truth to Trump's claims of widespread voter fraud in the 2020 election, that didn't stop countless Republicans from promoting them.

"Classical fascism conditions its followers to accept 'the big lie' which unifies their discontents and justifies their leaders' actions," Patterson explains. "So, in 2020, did the GOP. Granted that the big Republican lie did not equal Hitler's poisonous assertion that perfidious Jews stabbed Germany in the back, but the GOP's lie to its base was, nonetheless, breathtakingly ambitious: that an unfathomable conspiracy involving thousands of state and local officials and judges, many Republicans, had stolen the presidency from Donald Trump — from them."

Patterson notes some dangerous trends in the post-Trump Administration GOP — for example, he points out, "polling shows that a full one-third of Trump supporters" believe that the violent "mob" that stormed the U.S. Capitol Building on January 6 "represented their grievances." And he adds that "more broadly, half of the (Republican) Party's electorate believes that GOP lawmakers did not go far enough in attempting to overturn the election."

"One envisions Josh Hawley, Ted Cruz, and Tom Cotton competing with Donald Trump, Jr. for the Republican nomination in 2024, with Nikki Haley straining to put an anodyne non-White veneer on the party's authoritarian meta-narrative," Patterson argues. "It is far too little to say that the GOP has lost its way. Quite deliberately, it has become American democracy's most dangerous enemy."