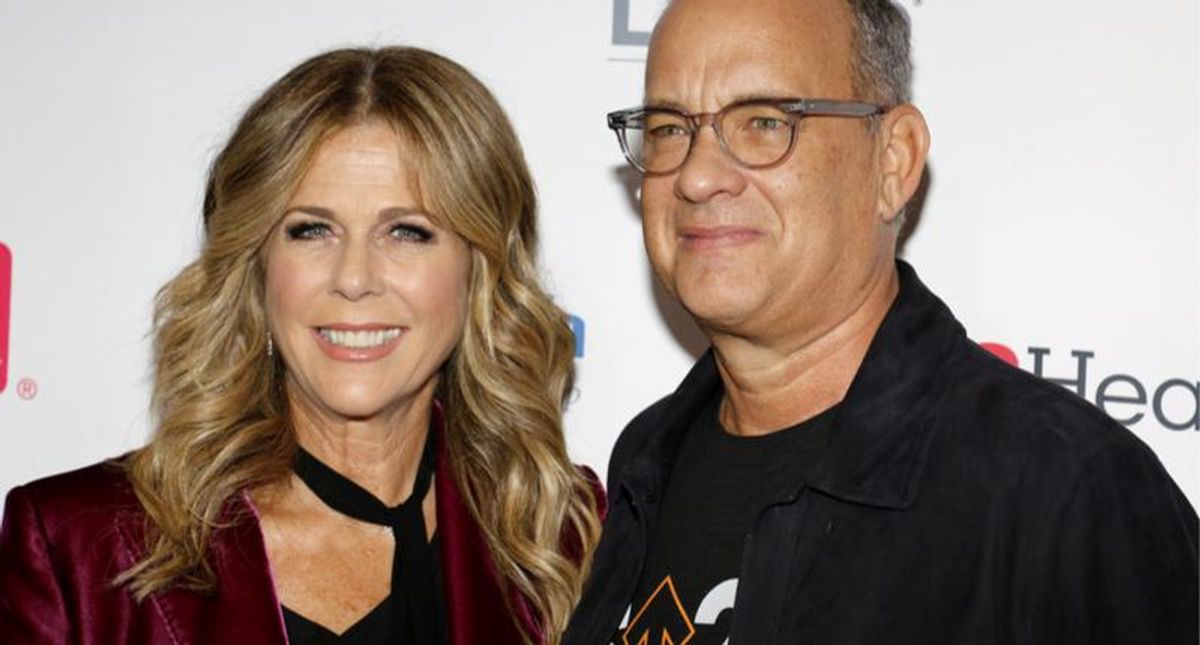 Tom Hanks and Rita Wilson at the 5th Biennial Stand Up To Cancer held at the Walt Disney Concert Hall in Los Angeles, USA on September 9, 2016. (Tinseltown)

Chet Hanks' Instagram communique promising a "white boy summer" is ill-advised, self-absorbed and head-scratching. But the social-media salvo has also, predictably, received a warm reception from white supremacists who gleefully embrace it as a rallying cry for racial exclusion, right-wing violence and the return of the Third Reich.

Best known as the son of Tom Hanks, Chet Hanks is an actor of a lesser stature, with roles on "Empire" and "NCIS: New Orleans" as well as an erstwhile rapper who performed under the name "Chet Haze." On March 26, he posted a video of himself seated behind the wheel of a parked car and chewing gum, casually announcing: "Hey guys. Look, I just wanted to tap in real quick. I just got this feeling, man, um, that this summer is, uh… it's about to be a white boy summer. You know, take it how you want."

Then, he qualified: "I'm not talking about a Trump, NASCAR type white. I'm talking about me, Jon. B, Jack Harlow [two white artists who have been embraced by Black audiences] type white boy summer, you know what I mean? Let me know if you guys can vibe with that? And get ready, you know? 'Cause I am."

The phrase "white boy summer" uttered by a mid-level celebrity on social media would have gained traction with white supremacists regardless of the intention, but Hanks carries some extra baggage on his own. The gothic lettering on the "White Boys Summer" sweatshirts and T-shirts marketed on Hanks' Instagram page suggest white supremacist aesthetics, including Hitler's book Mein Kampf. And Hanks has previously courted controversy for using the N-word, and then arguing he is as entitled to say it as a Black person.

As if to deflect charges of racism, Hanks rolled out a new line of "Black Queen Summer" shirts and proffered in another Instagram video: "I want to see some white boys and some Black queens wearing each other's shirts." Centering white masculinity while also profiting from Black women is unlikely to assuage any critics and is in its own way open to cooptation from white supremacists. While upholding an ideal of white female purity and chastity (which inevitably sets white women up for failure), white supremacists also celebrate the sexual conquest of non-white women and rape as a tool of war.

One day later, the user "Panther Den" tweeted to his 22,100 followers: "step 1: white boy summer / step 2: the return of Hitler." In another tweet that used the hashtag #WhiteBoySummer, Panther Den spliced Hanks' "It's about to be a white boy summer" footage into an aggressive montage that includes the Kyle Rittenhouse shooting, Hitler giving a sieg heil, Derek Chauvin killing George Floyd, and Trump supporters attempting to run a Biden campaign bus off an interstate in Texas during the 2020 election. To date, the video has been viewed 9,700 times and retweeted 166 times.

Another openly Nazi Twitter user, "Synth," tweeted: "Idk why they thought this was some sort of own against 'racists.' It had the complete opposite effect on people." That tweet links to another tweet that shows a clip from a satirical movie depicting a nature preserve for "endangered Aryans" to mate, with the comment, "Really, this is what #WhiteBoySummer is all about." In another tweet posting screenshots from Hanks' Instagram merch video, Synth marveled, "Was expecting him to scream 'HITLER!!!!!' when I saw the font." In the comment thread, Synth posted a link to Hanks' merch shop, and he and another user said they planned to buy the "White Boy Summer" apparel.

"Localism is never going to go away and you unlocal limpwrists and minorities who don't know how to act are going to get fucked and there's absolutely NOTHING you LOSERS can do about it," he wrote.

A day later, thanks to Hanks, Cassius Kaiser had a hashtag.

"Basically, what I meant to say is, Surf Nazism," he tweeted on March 27. "It's coming and there's literally nothing you can do to stop it because WHITE BOY SUMMER IS fucking HERE."

Linking to a Black Twitter user who wrote that "'White boy summer' sounds like a threat," Cassius Kaiser responded, "It is," while attaching a 1960s-era photo of white surfers sieg-heiling from a vintage car packed with surfboards.

In a more recent tweet on April, Cassius Kaiser wrote that "summer is almost here" and "it is time to… run minorities and unlocals completely off the beaches."

The Twitter Communications team did not respond before publication to a request for comment from Raw Story about whether the tweets promoting racist violence and celebrating the Third Reich violate its terms of service.

On Telegram, a social media platform favored by white supremacists because of its encrypted video chat function and lax moderation, three "White Boy Summer" channels have materialized that are dedicated to producing memes. The White Boy Summer channel, which surpassed 1,000 subscribers on Tuesday evening, is the most prolific. The aim is to create content that can migrate to more mainstream social media platforms. In a discussion chat responding to a "White Boy Summer" meme riffing on the movie Fight Club, Telegram user "Oskar Dirlewanger" wrote: "Very glad to see people capitalized on the super douche Chet Hanks fantastic propaganda idea, keep this going until its mainstream normie tier."

At least one prominent white nationalist has acknowledged the "White Boy Summer" meme.

Vincent James Foxx, who runs the Red Elephants website and podcast, tweeted a photo of himself on a boat, accompanied by the text "Summer is for the white boys" on March 29. Foxx reportedly documented and incited street violence by the white supremacist group Rise Above Movement in 2017. Foxx stood alongside Nick Fuentes, leader of the Groyper movement, outside the US Capitol on Jan. 6 and was a featured speaker at the America First Political Action Conference organized by Fuentes in late February.

Not surprisingly, the white supremacist meme-ing is also drifting into misogyny.

A manufactured Facebook screenshot shared on the "White Boy Summer" channel on Tuesday depicts a user who is presumably a young, white woman reporting that a man asked her, "What summer is it?" in the midst of a sexual encounter, and then reacted angrily when she responded that it wasn't summer yet.

Users in the discussion thread coalesced around the idea that the fictitious woman was worthy of degradation and rejection, but oddly the thread evolved into a debate over which substances are the "drugs of the white man" versus drugs that are "gay," degenerate and associated with Black people.

One Telegram user made a full-throated endorsement of drug use, celebrating it as an enabler of racist violence.

"Totally," he wrote. "Blow a few lines after some whiskey and fight a n***** posse with the bois."