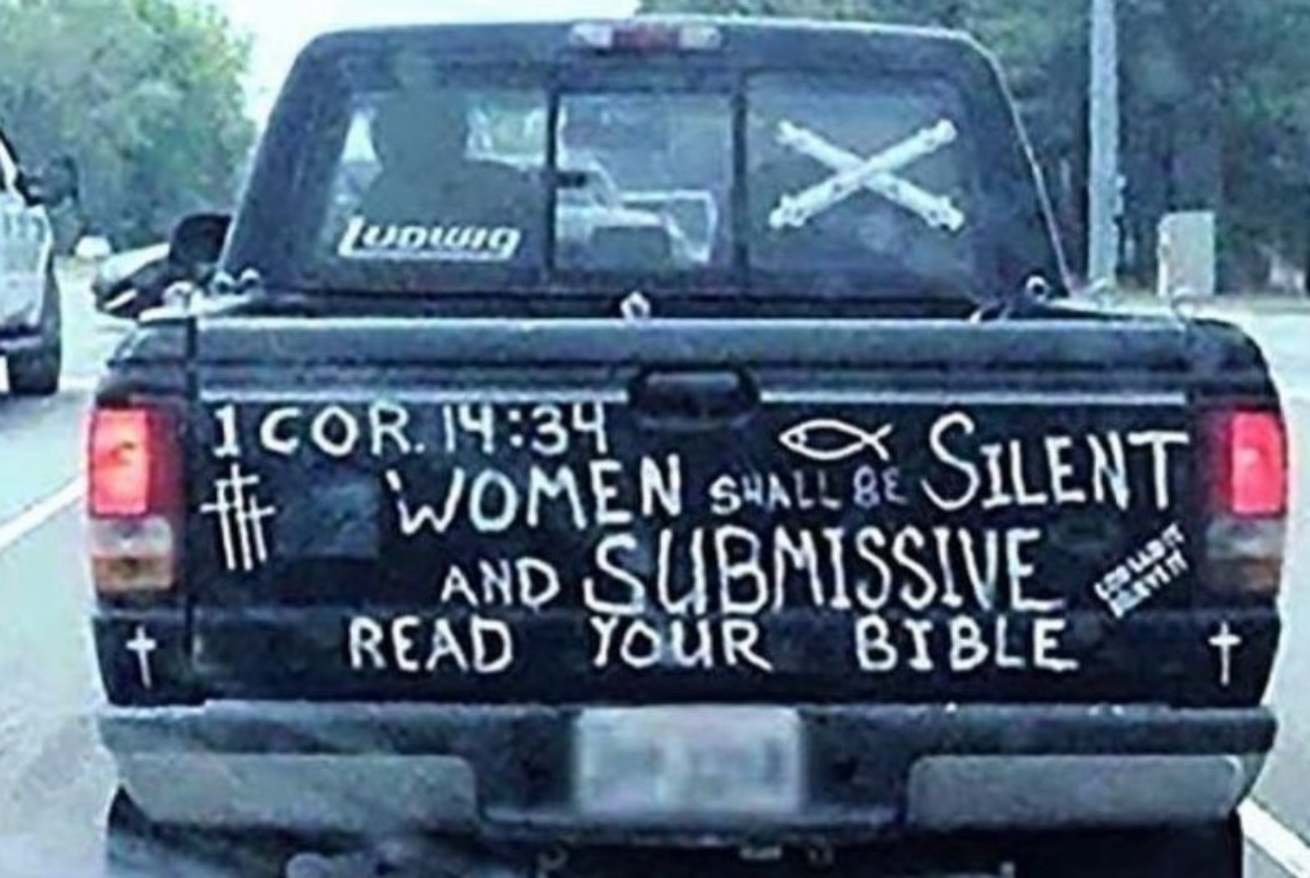 By which women’s bodies are controlled.

By which women have no say.

I offer this image as evidence of the challenges we face this November, but also to illustrate a categorical difference between the parties.

Republican voters expect nothing from the Republicans.

Democratic voters, by contrast, expect everything.

So when Republican voters go to the polls, it won’t be with policy expectations. All that matters is politics. Politics is war. War is power. Whatever the GOP ends up doing policy-wise, like cutting taxes for the very obscenely rich, it must be done without forgetting to preserve and promote white power as America’s only legitimate political order.

The guy with the above truck who believes women have no rights a man is bound to respect in this constitutional republic is going to vote no matter what, because his very life depends on him voting for the GOP. If he does not vote, and if the GOP loses, he thinks he faces a reversal of fortune by which the oppressor becomes the oppressed.

To him, he’s literally voting for his freedom.

Democratic voters should vote for their freedom, too. Myriad crises, not the least of which is periodic massacres that terrorize the public, undercut our right to peace. As I said Friday, ubiquitous mass death means our freedom has been revoked. Who needs a dictator? An open society will close itself by itself in the face of endless lethal threats.

These crises demand Democratic voters not only vote but vote in large enough numbers to put more Democrats in the Senate for the purpose of deregulating what is by definition an anti-democratic institution. With a Senate on par with the House, the Democrats could finally effect the transformative change the country desperately needs.

They should, but alas, Democratic voters won’t.

Democratic voters, especially white liberals, are very different. As I said, politics is war to Republican voters. War is power. Power is how to perpetually punch down and therefore to maintain “law and order,” ie, the natural order of things. If they don’t get what they want the first time, GOP voters fight harder next time. White liberals don’t do that.

To white liberals, politics is more like customer service.

When punishment is surrender

When they don’t get what they want, they threaten to take their business elsewhere. Because this is politics – there is no other business elsewhere – they punish the Democrats by … not voting at all. It needs saying, but should go without it, that one person refusing to vote is doubling the political strength of the person who does vote.

Worse, if they don’t get what they want, Democratic voters accuse “the system” of being so corrupt nothing can be done to salvage it, thus giving the impression that there’s no point even in trying.

Add to that an attitude by progressives toward the Democrats according to which they are weak, disorganized, self-defeating and incompetent – as decrepit and iniquitous as the Republicans.

As I said, Republican voters expect nothing.

Worse, if they don’t get everything, they surrender.

As New York Congresswoman Alexandria Ocasio-Cortez said, in a video she posted over the weekend: “It's just really wild to be a person that works in a corrupt institution, which is what Congress is. And to try to be a normal person surrounded by so much decay and moral emptiness that frankly transcends party is very difficult.”

I get where she’s coming from. I do. After those kids were shot to pieces in Uvalde, Texas, the civilized thing to do would be passing laws to prevent shootings massacres from happening again. But the way things are, any reform passed by the House will die in the Senate.

I get the impulse to throw up your hands.

But doing that helps the Republican Party win. It moreover ends up reinforcing white power as America’s only legitimate political order.

The Congress is not corrupt.

Not when it passed and the president signed gigantic covid relief and national development packages including the one-and-a-half-trillion-dollar infrastructure bill. Not when the House of Representatives, where Ocasio-Cortez works, has passed progressive bill after progressive bill on voting rights, human infrastructure, Roe and more.

To be sure, these are now lingering in the Senate thanks to united GOP opposition combined with three or four conservative Democrats who won’t change the Senate filibuster rule. And to be sure, the Senate is a maddening place for a democratic republic, as it gives too much influence to minority interests and not enough power to the majority.

But let’s be clear about the problem.

It’s not the Congress.

To be truly free

It’s the GOP, plus a handful of terrible Democrats.

The solution is not withholding one’s vote “to punish” the Democrats. The solution is voting harder, putting more Democrats in the Senate, so they can change the rules to pass progressive legislation we need.

But these accomplishments are going unrecognized even by Ocasio-Cortez, a highly influential progressive Democrat.

It’s as if nothing matters when the Democrats don’t deliver everything. It’s as if era-defining crises like inflation, the rising cost of energy, the covid pandemic, Russia’s invasion of Ukraine and climate change, could be fixed if only the management in the White House bothered to try.

Politics is politics. The Republicans get that. Nonwhite liberals get that. So do the weak, vulnerable and the powerless. After all, they are the one’s feeling the consequences of the Republicans punching down.

However, white liberals tend to be blind to the fact that white power constitutes the political order we live in. That’s in no small part from being beneficiaries of it. White liberals can reform the political status quo in order to be truly free but only when they understand why they can afford to be disappointed when they don’t get what they want.

And why they can afford not to vote in November.