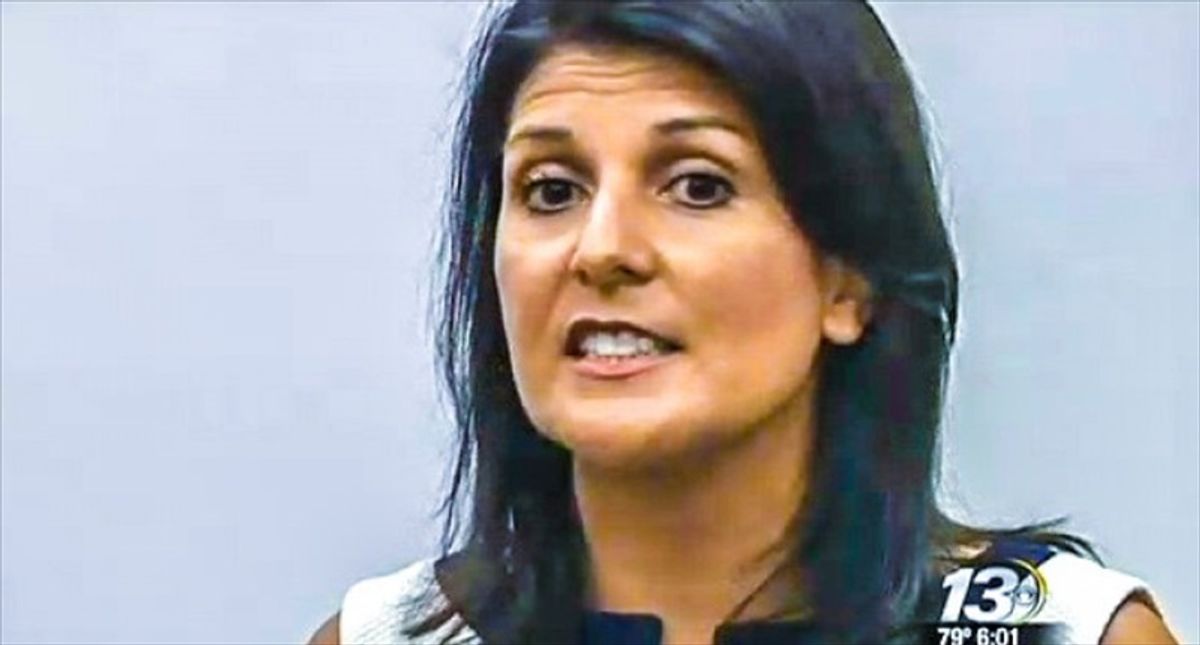 2024 GOP presidential hopeful Nikki Haley is once again under fire. Once seen by some as a stalwart who held to her beliefs regardless of political consequence, the former South Carolina governor and former Trump UN Ambassador has flip-flopped on nearly every issue she has weighed in on at least since leaving the administration, while choosing to speak out on the most fleeting issues the GOP is focused on.

"Critical race theory is harmful to a child's education," Haley tweeted, complete with video of her talking to far right commentator Dennis Prager, who insists America is not racist. He's also decried not being able to use the "n" word anymore.

After Prager calls the 1619 Project a "lie," Haley says "kids should not be taught that they are racist," which is not what critical race theory does.

But as Daily Beast editor Justin Baragona notes, last year Haley talked about the discrimination and bullying she faced because she is of Indian descent.

“In much of the Democratic Party, it's now fashionable to say that America is racist. That is a lie. America is not a racist country," Haley said at the 2020 RNC, as NBC News reported.

"I was a Brown girl, in a Black and white world. We faced discrimination and hardship," she added.

Haley has also described herself as "white" on a voter registration form, as Mother Jones reported in 2011.

She is getting scorched on social media.

So if kids "don't see color," is this story that Nikki Haley told of the discrimination and bullying she faced in her youth false?https://t.co/QA6ajcI9TS pic.twitter.com/QuE1AyLyoY
— Justin Baragona (@justinbaragona) May 4, 2021

This is what I mean. People who are capable of making 180 degree turns whenever and however it suits their personal ambitions are very dangerous people. That shows a lack of any real internalized value system https://t.co/p3nBDlBp42
— DEFUND & ABOLISH POLICE, REFUND OUR COMMUNITIES (@BreeNewsome) May 5, 2021

Also, I thought the word literally meant in a literal manner or exact. Please cite the critical race theory text that tells white children they're racist. Lastly, the 1619 Project is journalism, CRT is is a legal theory, which you probably didn't know since you haven't read.
— Ida Bae Wells (@nhannahjones) May 4, 2021

You don't even know what "critical race theory" is. You just want to deny knowledge of the country's foundational sins-- sins that we can see perpetuated every day centuries later and that you literally don't want us to learn from.
— Scott Tobias (@scott_tobias) May 4, 2021

You've literally read nothing on the subject. Why broadcast your ignorance?
— Dave Zirin (@EdgeofSports) May 4, 2021

Schools aren't teaching kids they are racist. Schools are teaching kids the history of the United States, which unfortunately includes racism, slavery, segregation and intolerance towards non-whites and non-Christians.
— Edw. A. Havens III (@havens_iii) May 4, 2021

ARE YOU KIDDING?! I went to a predominately white and considerably “friendly" public school and was called a “terrorist," a “towel head," and even a “sand n*****" - the few black students had it worse. Some kids ARE RACIST bc they're not taught better, and to deny that is naive. https://t.co/e3sI6Hjohy
— Puneet✨ (@Peeziedoesitt) May 5, 2021

Nonstop, vicious lying is all there is left. This person has presidential ambitions, too. https://t.co/1QHGPy7ETw
— John Stoehr's Editorial Board (@johnastoehr) May 4, 2021