Author Salman Rushdie is in the hospital with serious injuries after being stabbed by a man at an arts festival in New York State on Aug. 12, 2022. The following article was published on the 30th anniversary of the release of The Satanic Verses.

One of the most controversial books in recent literary history, Salman Rushdie’s “The Satanic Verses,” was published three decades ago this month and almost immediately set off angry demonstrations all over the world, some of them violent.

A year later, in 1989, Iran’s supreme leader, the Ayatollah Khomeini, issued a fatwa, or religious ruling, ordering Muslims to kill the author. Born in India to a Muslim family, but by then a British citizen living in the U.K., Rushdie was forced to go into protective hiding for the greater part of a decade. 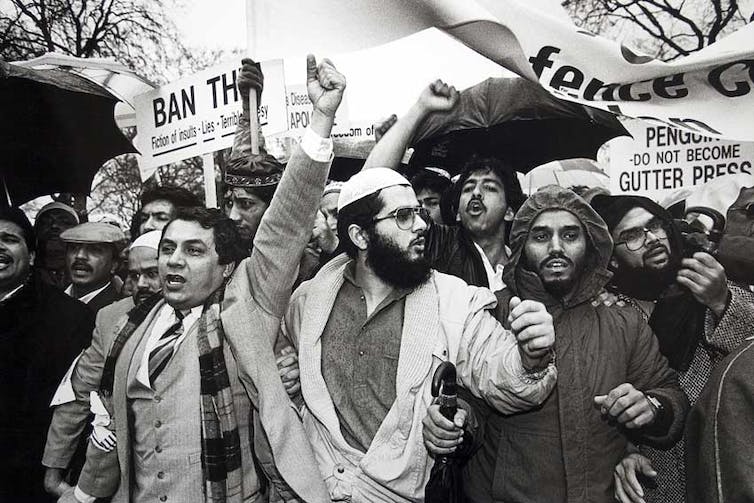 Angry demonstrators protest against the book in 1989.

What was – and still is – behind this outrage?

The book, “Satanic Verses,” goes to the heart of Muslim religious beliefs when Rushdie, in dream sequences, challenges and sometimes seems to mock some of its most sensitive tenets.

Muslims believe that the Prophet Muhammed was visited by the angel Gibreel – Gabriel in English – who, over a 22 year period, recited God’s words to him. In turn, Muhammed repeated the words to his followers. These words were eventually written down and became the verses and chapters of the Quran.

Rushdie’s novel takes up these core beliefs. One of the main characters, Gibreel Farishta, has a series of dreams in which he becomes his namesake, the angel Gibreel. In these dreams, Gibreel encounters another central character in ways that echo Islam’s traditional account of the angel’s encounters with Muhammed.

In addition, Rushdie’s Mahound puts his own words into the angel Gibreel’s mouth and delivers edicts to his followers that conveniently bolster his self-serving purposes. Even though, in the book, Mahound’s fictional scribe, Salman the Persian, rejects the authenticity of his master’s recitations, he records them as if they were God’s. 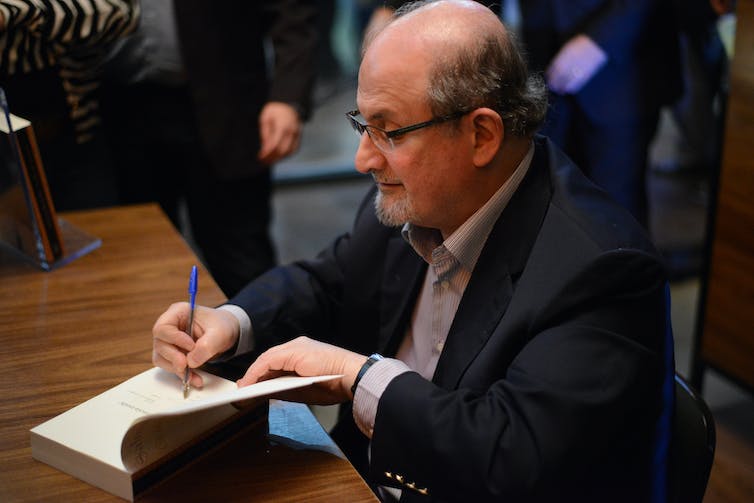 In Rushdie’s book, Salman, for example, attributes certain actual passages in the Quran that place men “in charge of women” and give men the right to strike wives from whom they “fear arrogance,” to Mahound’s sexist views.

Through Mahound, Rushdie appears to cast doubt on the divine nature of the Quran.

For many Muslims, Rushdie, in his fictional retelling of the birth of Islam’s key events, implies that, rather than God, the Prophet Muhammed is himself the source of revealed truths.

In Rushdie’s defense, some scholars have argued that his “irreverent mockery” is intended to explore whether it is possible to separate fact from fiction. Literature expert Greg Rubinson points out that Gibreel is unable to decide what is real and what is a dream.

Since the publication of “The Satanic Verses,” Rushdie has argued that religious texts should be open to challenge. “Why can’t we debate Islam?” Rushdie said in a 2015 interview. “It is possible to respect individuals, to protect them from intolerance, while being skeptical about their ideas, even criticising them ferociously.”

This view, however, clashes with the view of those for whom the Quran is the literal word of God.

After Khomeini’s death, Iran’s government announced in 1998 that it would not carry out his fatwa or encourage others to do so. Rushdie now lives in the United States and makes regular public appearances.

Still, 30 years later, threats against his life persist. Although mass protests have stopped, the themes and questions raised in his novel remain hotly debated.

Donald Trump has asked the U.S. Supreme Court to intervene in the Mar-a-Lago documents case, but a legal analyst told MSNBC's "Morning Joe" that his effort will likely fail.

The former president asked the court to require more than 100 classified documents be included in a review by the special master in an apparent attempt to stall the investigation, but former FBI official Chuck Rosenberg explained why the court Trump helped shape would probably not rule in his favor.

Prime Minister Liz Truss pledged on Wednesday to steer Britain through "stormy days" and transform its economy, fighting to restore her authority over a party in revolt after a chaotic first month in office.''

Addressing Conservative lawmakers and members at an annual conference overshadowed by internal bickering and confusion over policy, Truss said the party needed to unite to kick-start stagnant growth and tackle the many problems facing Britain.