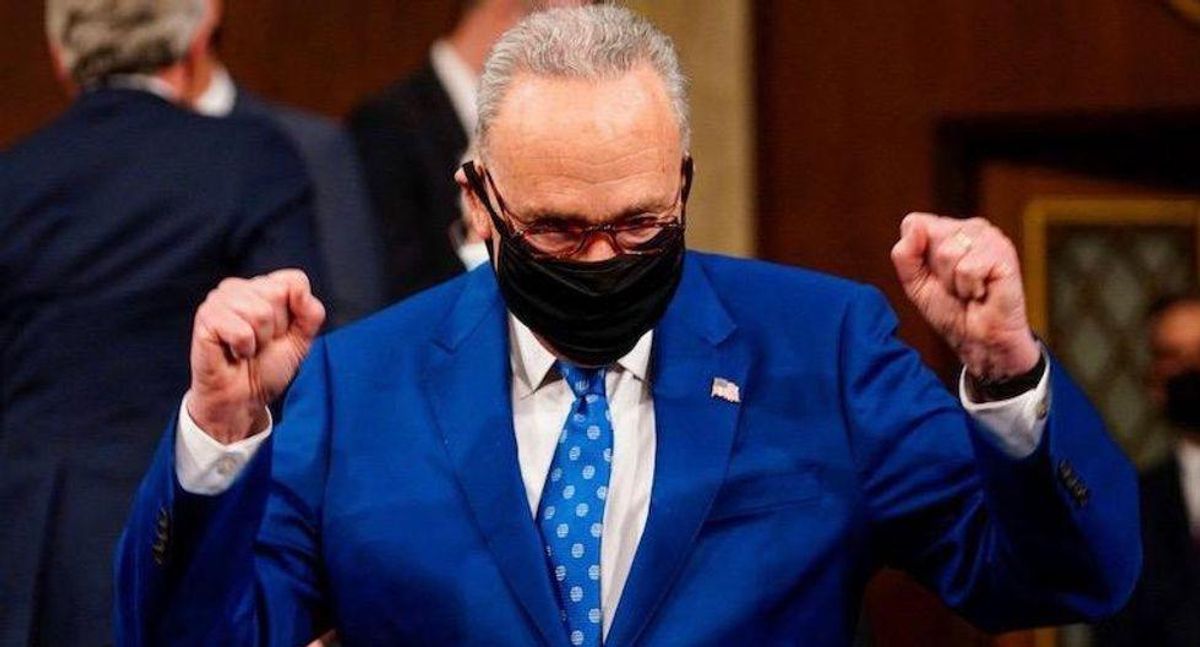 The U.S. Senate approved a $3.5 trillion budget blueprint with a party-line vote in the early hours of Wednesday morning, a key step toward passage of sprawling legislation that would expand Medicare, establish paid family and medical leave, and make substantial investments in green energy.

The chamber's approval of the budget framework came after the hours-long spectacle known as "vote-a-rama," a process during which senators are allowed to offer an unlimited number of largely meaningless, non-binding amendments to the resolution.

"The president and the Democratic caucus are prepared to go forward in addressing the long-neglected needs of working families, and not just the 1% and wealthy campaign contributors."
—Sen. Bernie Sanders

Republican senators, who are unanimously opposed to Democrats' $3.5 trillion proposal, seized the opportunity to put forth dozens of messaging amendments denouncing tax hikes on the wealthy, supporting a ban on the teaching of "critical race theory in prekindergarten programs and elementary and secondary schools," and pushing a $50 billion increase to the already-bloated Pentagon budget.

In a statement late Tuesday, the anti-war group CodePink applauded the Senate's rejection of the Pentagon amendment by a 46-53 vote.

"This vote should be viewed as a test of how committed our representatives are to actually addressing the climate crisis," said Carley Towne, CodePink's co-director. "The IPCC report released earlier this week made clear that if we're going to have any chance at addressing the climate crisis, we need to slash funding for the Pentagon, which is the largest institutional producer of greenhouse gases in the world."

"Today," Towne added, "46 senators prioritized increasing the profits of military contractors over the future of our planet."

The $3.5 trillion budget resolution now heads to the House, which can either pass the measure as is or amend it and send it back to the Senate. House Democratic Majority Leader Steny Hoyer (D-Md.) announced Tuesday that the lower chamber will cut its recess short to take up the measure on August 23.

If the House passes the budget framework, congressional committees will then move to convert the blueprint into legislative text, a process that's expected to drag on until mid-September. Once the package is assembled, Democrats will move the pass the bill with just 50 votes using budget reconciliation, which is exempt from the legislative filibuster.

In a floor speech ahead of Wednesday's vote, Sen. Bernie Sanders (I-Vt.) noted that Republicans have repeatedly used the budget reconciliation process to reward the wealthy and large corporations, pointing specifically to the $1.5 trillion Tax Cuts and Jobs Act that the GOP rammed through in 2017.

"I do understand that many of my Republican colleagues are in a bit of shock now," said Sanders, chair of the Senate Budget Committee and chief architect of the $3.5 trillion resolution. "They are finding it hard to believe that the president and the Democratic caucus are prepared to go forward in addressing the long-neglected needs of working families, and not just the 1% and wealthy campaign contributors. That's not the way things usually happen around here. Usually it's the big money interests and the lobbyists who call the tunes. But not today. Today, we move the country forward in a different direction."

"The American people want a government which represents all of us, and not just the few," Sanders continued. "This legislation is going to ask the wealthy and the powerful to start paying their fair share of taxes so that we can address the needs of working families, the elderly, the children, the sick, and the poor. "

While all 50 Democrats voted in favor of the $3.5 trillion budget resolution, the framework merely sets the outer boundaries of the forthcoming reconciliation package. Some conservative Democrats—most prominently Sinema and Sen. Joe Manchin (D-W.Va.)—have indicated that they may not support that level of spending, setting up a potential fight with progressives in the House and Senate over the specifics of the legislation.

"In order to save millions of lives and have a chance at a thriving future economy, Democrats must take advantage of this moment and pass transformative legislation," Rep. Jamaal Bowman (D-N.Y.) said in a statement Tuesday. "The $3.5 trillion in the Democrat-led budget resolution making its way through the Senate right now is much closer to what we need, but it still doesn't go far enough. We must absolutely pass that bill, but I will be doing everything in my power over the coming weeks and months to advance and support other pieces of legislation that reflect the scope and scale of the crises we face."