Wolves respond to changing environments in the north by adapting to available prey. Boreal wolves hunt large ungulates: moose, deer and caribou. But the western Canadian boreal forest is changing rapidly, looking nothing like it has in the past and like nowhere else on Earth. Wolves use roads, trails and petroleum-exploration “seismic” lines to hunt more efficiently.

The combination of wolves and environmental changes brought about by resource extraction cause woodland caribou declines.

Governments have made the tough call to kill wolves to save caribou, a contentious decision that has spurred much public outcry and debate. While wolf culls do have some positive effects for caribou, culls remain mired in some mystery: very little research exists on their side-effects for surviving wolves, or the animals they live with.

We tackled this problem in northeastern Alberta, where we had been using remote camera traps to research white-tailed deer invasion and the boreal mammals’ response to development.

After three years, the government launched a multi-year wolf population reduction program in our study area, using collared wolves as “Judas wolves” to locate packs for aerial gunning. We quickly responded by redeploying our camera-trap array for another three years, giving us some of the only before-and-after data on the entire mammal community for any wolf control program in North America. 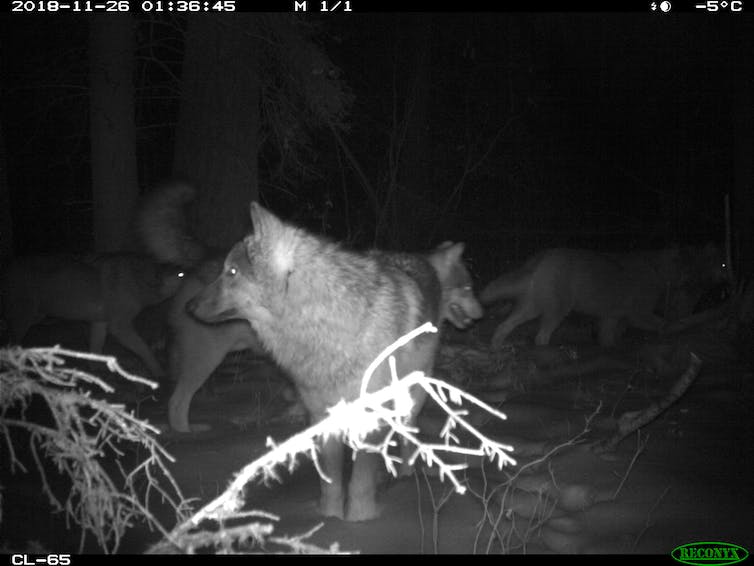 Our first research was on wolf behavior: what do surviving wolves do after a strange aerial predator starts killing neighbours? One aspect of a species’ behavior is time: species use the day in different ways to deal with different challenges. The time-stamped photos from remote cameras allowed us to examine species’ use of their days.

Wolves, being highly adaptable, changed their behaviours to cope with aerial gunning, and turned to darkness. Before the cull, wolves were normally active during daylight hours, with small peaks between sunrise and sundown, with a slight dip around noon. After wolf control, surviving wolves shift into nighttime hours, with activity peaking just before midnight and again just before sunrise.

Activity from sunrise to sunset was much lower, and almost nonexistent at midday. The cover of night allows them to avoid aerial gunning. In fact, many mammals — like coyotes, tigers and wild boars — are becoming nocturnal to avoid human disturbance.

But animals often use their day to avoid predators and competitors. We expected that other animals might also change their habits to avoid newly nocturnal wolves. But this was not the case: lynx, coyotes, black bears, moose, deer and caribou all went about their normal business hours. 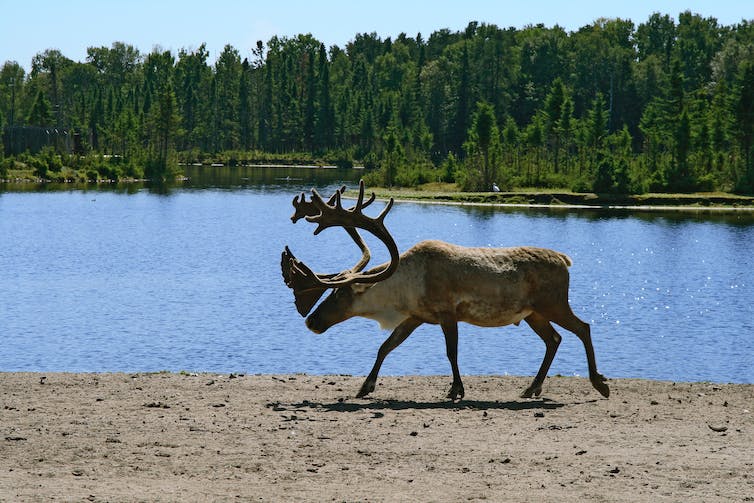 After shifting their time of day, wolves’ daily activity patterns no longer overlapped heavily with their big prey: deer, moose and caribou. Instead, their activity overlapped markedly with smaller snowshoe hares. In effect, wolves become “temporally decoupled” from their big prey.

We still don’t know if this behavioral change will have ramifications for wolves’ diet and prey populations. If wolves are not active at the same time as large ungulates, predation rates decrease. This will likely contribute to recovering caribou population growth.

Conversely, if predation on white-tailed deer decreases, it may allow this invasive species to expand. And if wolves switch to hunting snowshoe hares, there could be adverse effects on coyotes, lynx, fishers and other carnivores that rely on hares for food.

As a society, we made the difficult decision to kill wolves to save caribou. The onus is now on us to learn all we can from this decision, to better understand how boreal animals use their landscapes — and better plan for resource development, so we never have to make this decision again.