'It’s never looked like this': Tiny Arkansas county reeling as dozens of children hospitalized with COVID 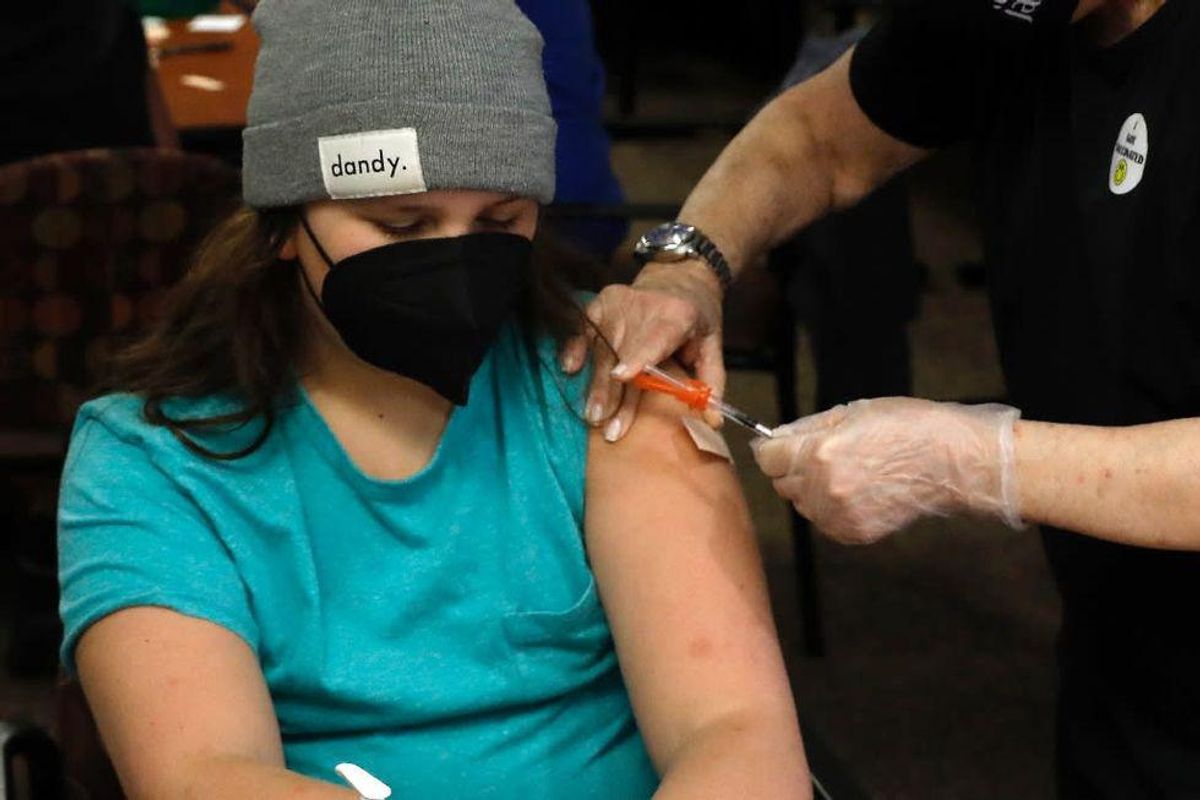 Dash Hunger, 12, receives the Pfizer-BioNTech Covid-19 vaccine in Bloomfield Hills, Michigan on May 13, 2021

In a deep dive on how the resurgence of the COVID pandemic is affecting smaller towns not on the national radar, the Wall Street Journal focused on Greenwood, Arkansas (population 9,000) where vaccination rates are well below 40 percent and now the town's children are suffering.

Focusing on the tragic passing of community leader Michael Lejong, 47, in July from COVID -- after he delayed getting the vaccine while his wife went ahead -- the Journal reports that the town is now reeling at the reality of the pandemic as children are increasingly being hospitalized.

Speaking of Lejong, his wife Katie remarked, "It's personal now because he knew so many people. Before, it was happening somewhere else."

"Sebastian County, which includes Greenwood and the much larger city of Fort Smith, has had 292 Covid-19 deaths since the start of the pandemic and currently has an estimated 737 cases, according to the state department of health, and has been adding about 73 new cases each day," The Journal's Elizabeth Findell and Kris Maher reported. "The state overall has been adding more than 2,800 new cases daily and has more than 1,000 patients in hospitals, near the previous high level in January. Deaths, a lagging indicator, have been averaging more than 20 a day, and the percentage of Covid-19 tests returning positive results hit an all-time high last month."

With a local doctor recently telling members of the community at a city council meeting that "Arkansas hospitalizations for Covid-19 have risen nearly fourfold in just over a month," the report notes that infections are spiraling out of control.

According to Dr. Lee Johnson, "The patients he is seeing are younger and younger. The state children's hospital now has dozens of children hospitalized with the virus, while it never saw a handful during previous surges. The hospital where he has practiced for 22 years, in nearby Fort Smith, has been struggling to handle rising cases."

Speaking with Journal, Johnson lamented, "It's never looked like this. We're full. The hospital is full. The ER is full. Ambulances show up and they're waiting, sometimes a considerable amount of time, for a bed to open up."

Asked about resistance to getting vaccinated, he explained, "There are some people who just aren't afraid of Covid. I haven't figured out how to turn that person, but I do know that making them feel defensive for their passionately held opinion isn't productive."

To illustrate the difficulties in convincing locals to get vaccinated, the Journal reported on one nurse who lives in the area and is still refusing to get the shot despite the fact that she lost both her unvaccinated parents, Robert and Vi Herring, to it after they attended their high school reunion.

"Ms. [Shanda] Parish said she still won't get it; she simply doesn't trust a newly created vaccine. She doesn't regret that her parents didn't get vaccinated, she said. It was their choice. Instead, she regrets that she was quarantining ahead of a cancer treatment when they fell ill and couldn't be involved in pushing to get them hospitalized sooner," the report states before adding, " Since the Herrings died, Ms. Parish has felt judgment from friends and acquaintances asking why her parents weren't vaccinated—why she didn't make them get vaccinated."

According to a tearful Parish, "We didn't kill them, but some people make us feel like it's our fault they're gone. No one should try to make you feel guilty because someone died."

Her brother, David Herring, who lives in Washington D.C., disagrees.

"I'm absolutely angry and frustrated," he stated. "Their age and health conditions—they should have gotten vaccinated really early…. And then trying to talk to friends of theirs and hearing these ridiculous things about depopulation and computer chips."