Sexism and racism - what lies beneath...

NOTE: This is the guest post I have up on Open Left today. I was invited by front-pager Jon Pincus to participate in a mutual guest-blogging series to bring more diverse perspectives to that progressive blog. The subject selected was the treatment of Hillary Clinton and Michelle Obama by the mainstream media. Please join in or read the comments over there to see the views and reactions of that reader base. As part of the series, I plan to be active in the comments of my post at Open Left to respond to folks there.

In looking back at the MSM treatment of Hillary Clinton over the course of the primary season, there was an expected eruption of misogyny -- from Chris Matthews Greatest Hits and The Tweety Effect, to the infamous Hillary nutcracker -- yet what I found most interesting was the handwringing over the whole matter. Similarly, there was desperation by some on the left (and right) to declare 2008 a "post-racial" election; they saw their hopes dashed as the bloody chum was tossed out to the hungry media sharks by Clinton surrogates and the usual GOP shills, rife with allusions, counter-charges and just plain old race-baiting idiocy (see Geraldine Ferraro, Andrew Cuomo, Bob Johnson). 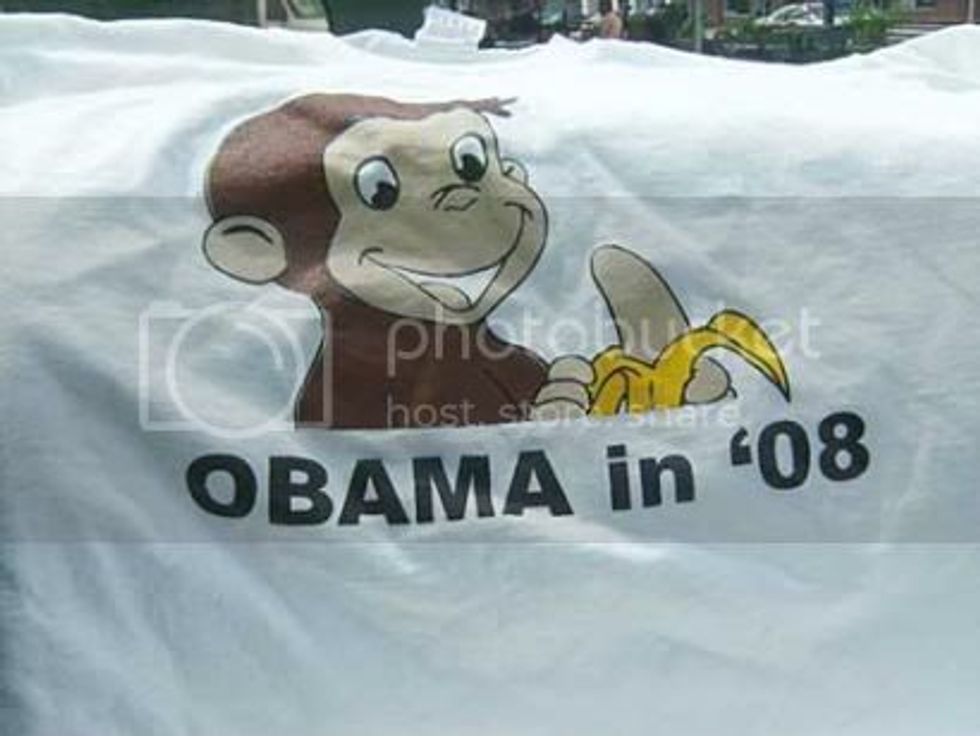 But back to gender. Michelle Obama and Hillary Clinton have had to deal with the media's obsession regarding on their appearance, dress (Hil's "pantsuit schedule," Obama evoking Jackie O), and emotional restraint (or perceived lack thereof).

Women who run for political office -- as well as wives of candidates -- undergo an extraordinary amount of scrutiny by the mainstream media. Given the nature of the demographics in most newsrooms and the need for eyeballs and revenue, there is a strong desire to cater to low-info, image and celebrity-obsessed America by playing into the superficial aspects of what a women in the public eye should look like.

I attended the International Gay and Lesbian Leadership Conference conference in 2006; the annual event gives openly LGBT elected and appointed officials a chance to get together to hear war stories about running for public office, and they share ideas and strategies on how to run successful campaigns. At the women's roundtable, women at all levels of elective office discussed the consistent advice given by consultants to openly gay lesbians -- everyone has an opinion about what you should wear, the amount of makeup you need, the kind of haircut you must have in order to lower the "fear factor" with potential voters -- it can be ludicrous. One has to sufficiently "femme up" for public political consumption, as well as be on top of your issues, lest people get distracted by thoughts of your sexual orientation.

And as we've seen, gay-baiting charges are in abundance from the right when it came to Hillary Clinton. 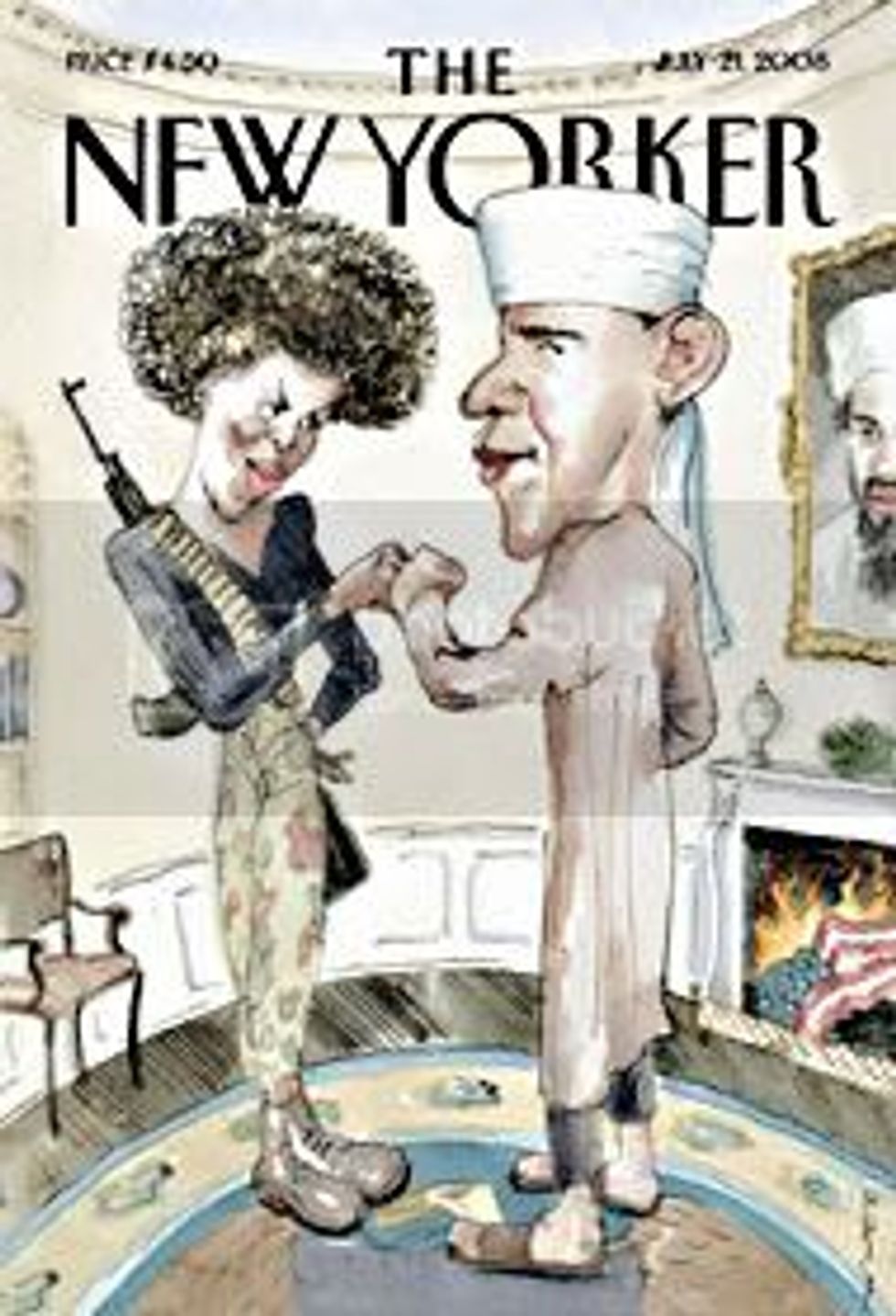 Turning to Michelle Obama, there's been baiting of a different sort, most recently revealed in the "misunderstood satire" of the New Yorker's cover art. Editor David Remnick, has come under quite a bit of fire for the decision to run Barry Blitt's illustration. Remnick's defense:

I ran the cover because I thought it had something to say. What I think it does is hold up a mirror to the prejudice and dark imaginings about Barack Obama's — both Obamas' — past, and their politics. I can't speak for anyone else's interpretations, all I can say is that it combines a number of images that have been propagated, not by everyone on the right but by some, about Obama's supposed "lack of patriotism" or his being "soft on terrorism" or the idiotic notion that somehow Michelle Obama is the second coming of the Weathermen or most violent Black Panthers.

He neglected to take the direct route and refer specifically to Angela Davis when describing the imagery used by Blitt. A good question to pose here is whether there was something else at work here -- a little unexamined white privilege, of course -- in what makes the generously Afro-ed Mrs. Obama on the cover so intimidating (aside from that rifle slung over her shoulder).

That hair. Some people of a certain age may have no clue who Angela Davis is, but what is deeply embedded in our culture is the sense that kinky hair = bad, ugly, dangerous, non-conformist, animalistic, sluttish, and unseemly -- a visual manifestation of what I call The Secret Black Radical Trojan Horse Agenda that Michelle Obama allegedly represents to paranoid voters who cast a ballot based on the Fear of a Black Planet, the wrath of the Negro Overlords. These people, who will not see the irony, believe that agenda will be fulfilled through the vessel of the pleasant, benign Michelle and Barack Obama not depicted on that cover. This imagery brings all of those fears to the surface, and that big kinky fro is part of the package.

I had been blogging about the politics of hair for quite some time before people started to take the matter seriously (I was also in a documentary about it). The tipping point on the blog was the Don Imus "nappy headed hos" debacle, and the fallout from that in the media gave people a window into the deeply held views -- including self-loathing of black women -- about natural hair. Its very nature screams disobedience to some people, including those who thankfully leave their political correctness at the door so the pathology can be exposed. From my post on March 31, 2006, Neal Boortz just lets it fly:

BOORTZ: For instance, or for goodness sakes, jump in and I'm gonna say -- I'm gonna start out with something controversial. I saw Cynthia McKinney's new hair-do. Have you seen it, Belinda?
SKELTON: No.

BOORTZ: She looks like a ghetto slut.
SKELTON: Well, how is it?

BOORTZ: No, it's not braided. It just flies away from her head in every conceivable direction. It looks like an explosion in a Brillo pad factory. It's just hideous. To me, that hairstyle just shows contempt for -- no, it's not an Afro. I mean, no, it just shows contempt for the position that she holds and the body that she serves in. And, I'm sorry, there's just no other way to -- it's just a hideous and horrible looking --

...MARSHALL: It looks better than the braids she was wearing.
BOORTZ: No, the braids had some dignity. They had some class.

MARSHALL: The braids had dignity?
BOORTZ: They had more class than this thing.

MARSHALL: This says, you know, kinda 2000s, you know, stepping up to the plate. Contemporary look, you know?
BOORTZ: She looks like Tina Turner peeing on an electric fence.

More recently, the paranoia about the Black Radical Trojan Horse and Michelle Obama reached a fever pitch with the breathless rantings of Larry Johnson, who made an ass out of himself promoting a non-existent tape of Mrs. Obama screaming the mucho-retro "whitey" in a public venue.

So with that coursing through the veins of the blogosphere and the MSM, it is no surprise to see how the "radical" Michelle Obama would be portrayed on the cover, satire or no satire.

It is what lies beneath the polite discourse, and it is an uncomfortable subject to have a frank, but constructive dialogue about because race is a third rail topic. It gets a superficial workout, but never examines the white privilege, much the same as male privilege is not explored in the context of women in politics.