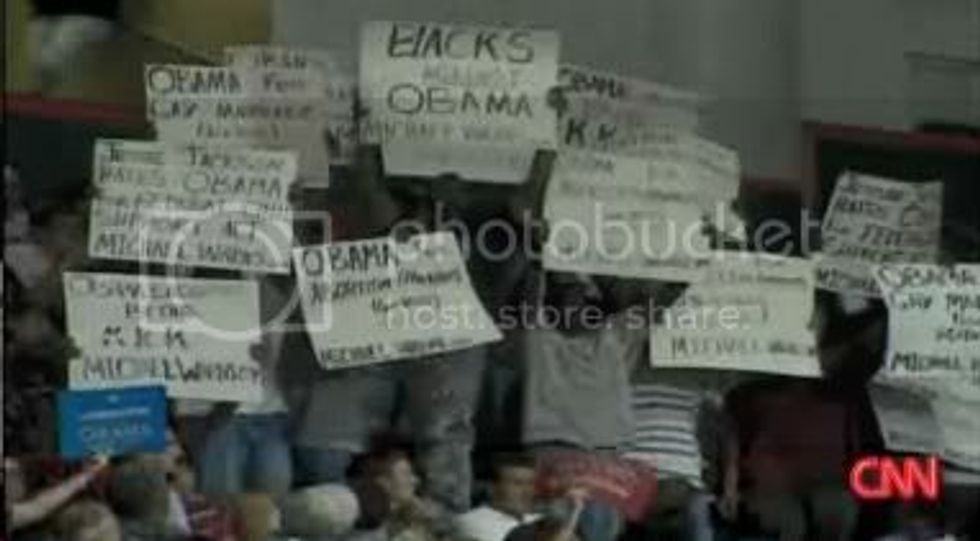 Can this election season get any more bizarre? Of course we've got the PUMAs and the Log Cabin peeps displaying an incredible willingness to present embarrassing, debasing, credibility-crushing arguments in service of John McCain's candidacy.

There is also a mind-boggling tiny anti-Obama "movement" backed by an anti-choice, anti-LGBT black preacher named Michael Warn. His followers put on a bit of unhinged performance art on Friday at a Barack Obama rally at the University of Miami, heckling and holding up signs that said "Obama endorsed by the KKK," "Blacks Against Obama", "Obama for abortions", "Obama for gay marriage" Obama's reaction (here's the video):

Obama briefly paused and tried to calm the crowd down by telling the crowd to hold on. "Hey young people out there - it's no problem for you to put your signs up, but let everybody - let me finish what I have to say, alright?," he told the protesters as he stood on stage.

The group was escorted out shortly afterwards by security. "Alright guys, see ya," Obama said as they left, "Alright, let's get back to work."

It would be a relief if I could say that this is some phony front organization put out there by the GOP, but alas, even the Republicans aren't this insane. Warn's folks believe:

* Oprah is the devil, leading all women down this path;

* Obama is the enabler of this destruction of the black man.

People of the WORLD this BOOK OF TRUTH is your warning to separate from LILITH. For what communion has light with darkness. EVE is 67% of the BLACK WOMEN, the one that is GOOD and will help save us, ADAM THE BLACK MAN. THE BLACK MAN is almost extinct and LILITH the DRAGON will kill us all if EVE and we the people of the world don't stop her. LILITH must be revealed. This WOMAN has made man in the world impotent and obsolete.

...WOMEN TOOK OVER IN AMERICA

When America gave women the right to vote. How? Because they out number men 40 to 1, women have the voting power in numbers, the majority. There are two hundred and sixty million people in America. Black LILITH has a thirty million person block vote. Other nations of people consist of two hundred million people but they are separated. Ex. There are five million Irish, seven million Germans, eight million Scots etc. They all vote against each other, then LILITH the evil woman takes her thirty million block vote and join on to the women of other nations of the two hundred million voters under so called women issues, out numbering men completely. When she is grown 6+6+6=18. She takes the power of 666 in Rev. 13:18 being the majority in America. She takes her numbers and vote her men in who will do her will, and make the laws in her favor.