What kind of leadership does the LGBT movement need? 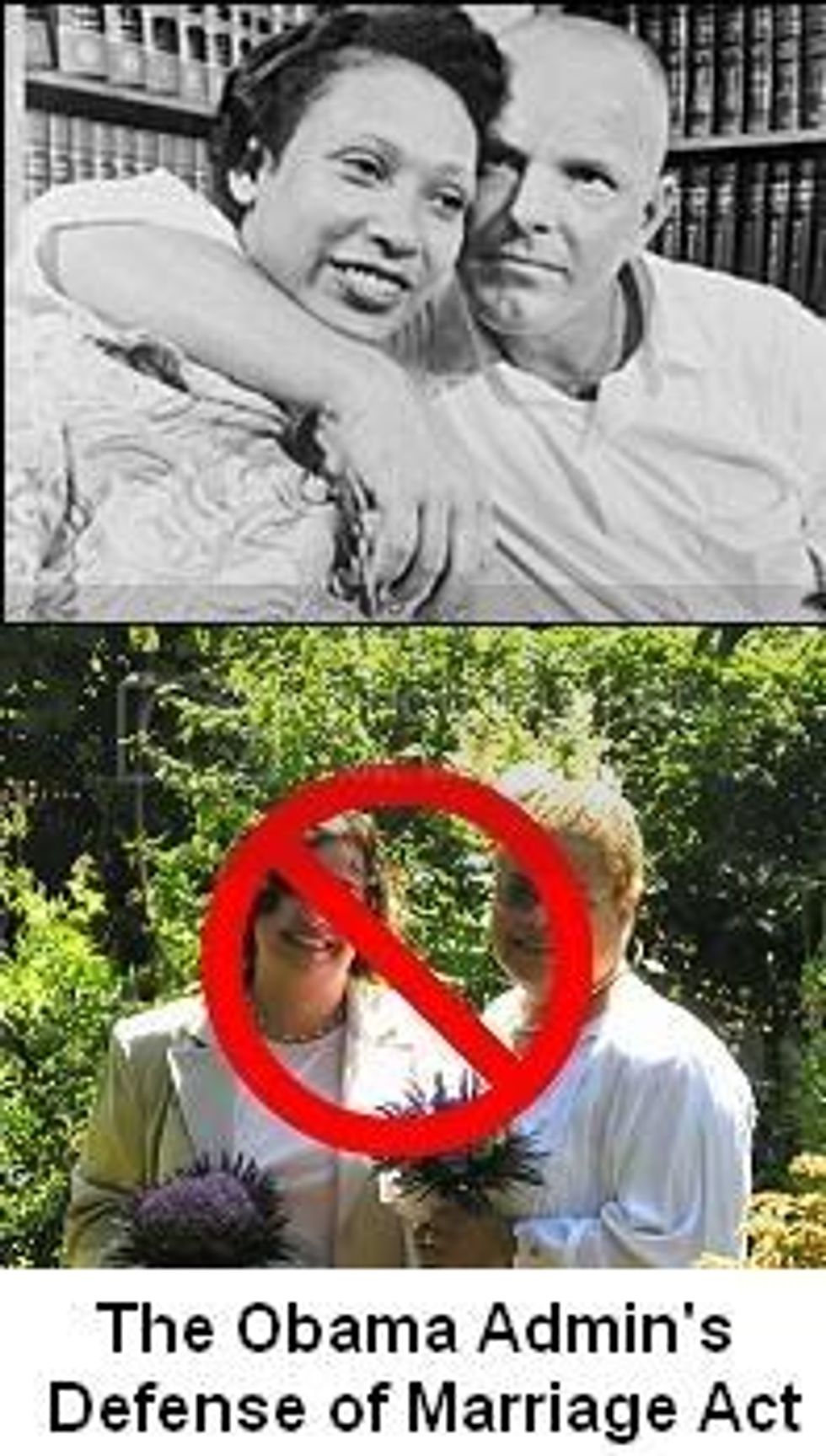 The fact is that we actually do not know what Obama's personal views are on marriage equality for same-sex couples. And that shouldn't really matter. Because we do know he was on record at one point as supporting marriage equality and then that changed. We also know that he now espouses the tired rationalization that so many Democrats rely upon: "Aw, gee, I'm all for equal rights, but my religion doesn't let me get behind the calling it 'marriage' thing for you all. Sorry."

But, for some reason, we allow - without open challenge - this Constitutional legal expert to use his personal religious beliefs as an excuse to espouse support for a separate but equal policy and not to speak out for civil equality for all Americans? Really?!

Are we that desperate?

Let's say, just hypothetically, that a meeting took place between certain Administration officials and certain leaders of prominent LGBT rights organizations. And let's say, again hypothetically, that the Administration laid out its plan for dealing with hate-crimes legislation, employment discrimination, and military discrimination in a characteristically controlled and pragmatic way. Further, let's say - still talking hypothetically here - that, within that plan, the repeal of the travesty of the so-called "Defense of Marriage Act" (DOMA) was scheduled to be addressed during the Administration's presumptive second term. Let's also theorize hypothetically that some LGBT leaders were apparently so happy to be let behind the curtain that they simply nodded in response. Not acceptable.

Note to President Obama, his advisors and LGBT Grand Poobahs everywhere: that's NOT leadership. It's political strategy, sure, but it's not presidential leadership. And it's not enough.

That last section I bolded is fantasy unless the President actually takes on that filthy brief defending DOMA by his Department of Justice.

Honestly, the answer to Leah's question is that each of us has to lead because traditional leadership has failed us. And we can all lead in all kinds of ways; we don't have to have access to cocktail parties in DC to rub shoulders with an administration that sh*ts on us make a difference. We have to write, call, demonstrate, lobby lawmakers, speak out to your neighbors, help friends come out of the closet, live your own life out of the closet. Ask your allies to come out of closet as strong advocates, not just passive supporters.

Meanwhile, the buck stops at the President's desk. Other questions to ponder:

* how aggressive (or not) will the professional advocacy gays be in holding this administration accountable?

* will the progressive movement keep its rolling-over-the-gays bus in overdrive, continuing to defend the brief, saying the administration "had to do it" or "Obama couldn't have known about the contents of the brief"?

More below the fold. Joe Sudbay has written a thoughtful and spot-on piece about the sad reality that many in the progressive straight community, particularly those who are lawyers, are defending this administration's decision to defend DOMA in a manner that is completely soulless, devoid of humanity and it's not all that surprising to me (check out this post for a prime example). Joe:

For some, the decision whether to defend or oppose DOMA is purely a legal exercise. For many of us, it's our lives. I'm sure, along the way, Thurgood Marshall and the NAACP were told to back off on their challenge to Topeka's segregation law. After all, that law had been unsuccessfully challenged already, and there was that very clear Supreme Court precedent on "separate, but equal." The law is the law. Who was this political activist Thurgood Marshall to suggest it should be overturned?

It's shocking how many people viewed yesterday's DOMA discussion through their own purely intellectual, legal lens. The condescending tone from some of the legal types, both straight and gay - all Democrat - was insulting, demeaning, and horribly out of touch (with their own humanity). Gay Americans lost rights last November in California. We had fundamental rights taken away by an election. Think about that. When was the last time that happened in this country?

Some of this is really about heterosexual privilege, coming from people who have full civil rights; isn't it nice from that vantage point to smugly tell LGBTs who could lose their job for being LGBT or legally marry in one state and lose all of those rights when you cross a state line that they have to wait -- and be quiet lest they ruin _____ (health care, the environment, economic recovery...fill in the blank).

Journalist Karen Ocamb asked Jon Davidson, Legal Director at Lambda Legal to comment on the brief and the choices the Obama DOJ had -- and decided to follow through with on this civil rights issue.

Whether or not the administration felt a need to defend, there are many ways one can defend. The administration could have rested on the first two arguments raised in their papers (jurisdiction and standing) that these plaintiffs were not entitled to sue without arguing at this point that DOMA is constitutional. Doing that would not have waived those arguments. What they need to be asked is why they gratuitously went out of their way to make the outrageous arguments they unnecessarily included such as that DOMA does not discriminate based on sexual orientation or that the right at issue is not marriage but an unestablished right to "same-sex marriage" or that DOMA is somehow justified in order to protect taxpayers who don't want their tax dollars used to support lesbian and gay couples (while it's apparently fine to make lesbians and gay men pay the same taxes but be denied the benefits provided heterosexual couples). Their public statements about the filing try to sidestep these points. They absolutely knew they did not need to make these additional arguments, especially at this time and consciously decided to do so. I am seething mad.

This reminds me of the charge levied against LGBTs by the black community -- that LGBTs don't care about social justice issues in the black community, then come around, not only asking for support on LGBT issues but also being chastised for the homophobia in the black church as if 1) all blacks are religious and 2) they are all homophobic. White privilege, like straight privilege, is a terrible blind spot that continues to exist because no one likes to talk about it (or are able to discuss it rationally). Progressives want LGBTs to be on board and promote their pet issues (and largely, we do), but when it comes down to the tough stuff on our issues -- and we need all the allies we can get -- they have a million excuses why it's not time, we don't have it bad enough, move along.

Soul-searching and looking in the mirror are something we should all do once in a while.

* Video rewind: Obama asking for our support on the campaign trail