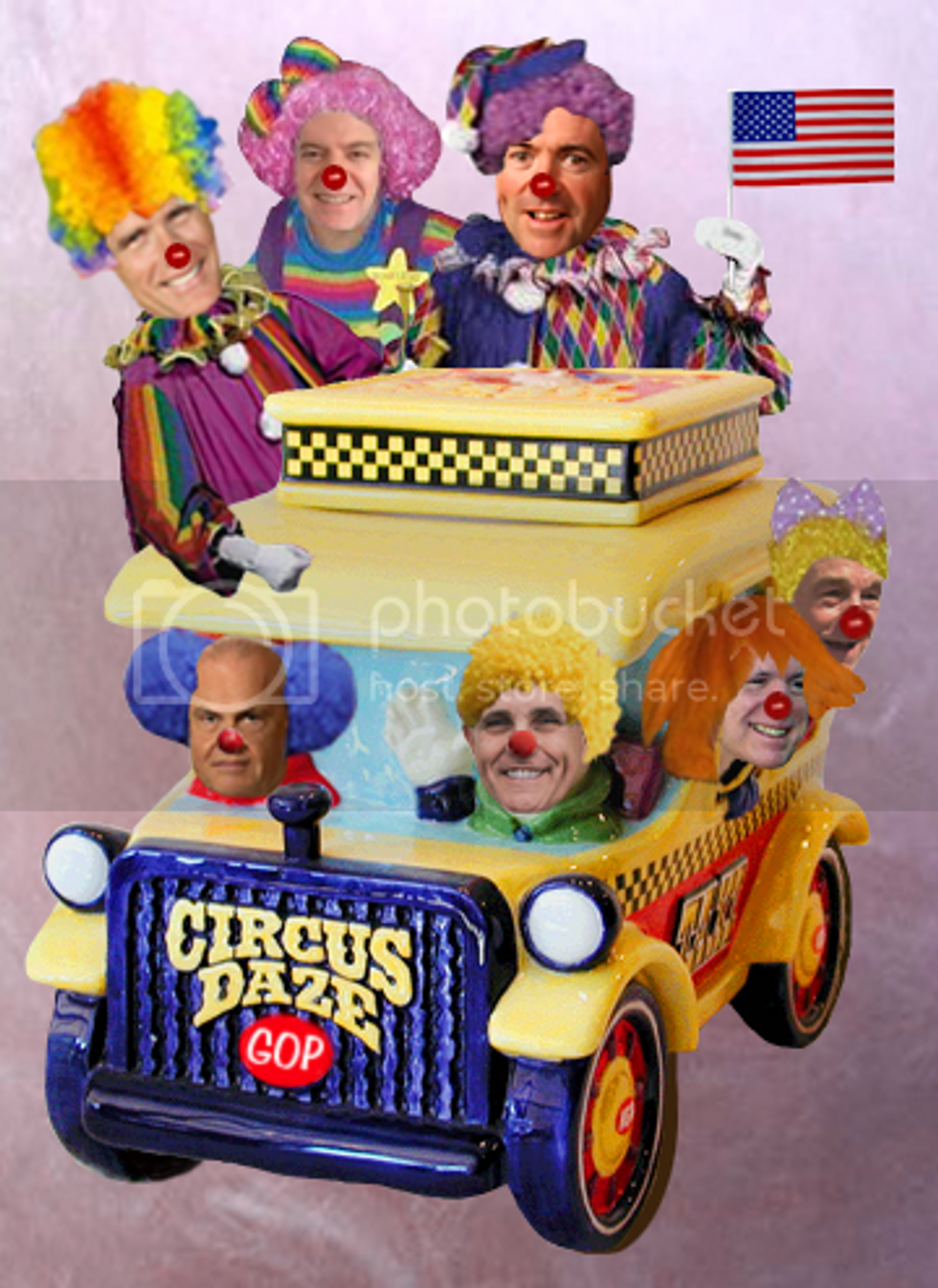 Right: So who will be riding in the GOP clown car in 2012 -- whose heads should replace these from the 2008 cycle's car (Rudy "Popo" Giuliani, Fred "Bobo" Thompson, Mitt "Dodo" Romney, Sam "Coco" Brownback, Mike "Hoho" Huckabee, Ron "RoPo" Paul, and John "Assho" McCain)?

It's so interesting to see the right squirm about 2012 so early as they watch potential candidates self-immolate (Ensign, Sanford, Palin). They want to believe that the GOP can field a decent candidate, but the prospects are slim. Take this discussion, "Romney vs Mitch Daniels in 2012?", where one Freepi posits that Romney will be the nom by default. The discussion is hilarious.

Ensign has discovered what goes on in Vegas does not always stay in Vegas.

Palin is retiring from politics.

Haley Barbour is a former lobbyist who runs the poorest state in the Union.

Huckabee is a 5th stringer.

John Thune is running for Vice President and we have no idea whether General Petraeus is a conservative or not.

It looks like the only guy who can stop the Mitt Machine is Daniels.

If you don't like Daniels, then Romney is the nominee by default in 2012.

Read about some of the insane prospects below the fold. The Sarah diehards are in there, but no one seems happy that Romney may have a chance at the nom.

Not voting for Romney.

I listened to her entire announcement. It was honorable, it was direct, and it punctuated the insane politics of our day...it also punctuated her personal commitment to fight, and to do so when it would not distract further from her job as Governor and the foundation she has built there. I am proud of her and support her. She is a great American.

I think Sarah has just turned, like a fed-up mama Bear, on her detractors. She has put things in order, she has left them in the hands of capable people, and she has now turned to face her enemies directly.

...and I think they are going to be sorry. We have smelled the fear in them for a long time. Good on her!

I believe she will assist others greatly in 2010, and will run herself in 2012...and she has my full support.

Palin is retiring from politics.

That's not at all what she said in her speech.

Sarah Palin has effectively just taken herself out of the running. Governor Sanford did that last week. The field now narrows to Mitt Romney and Newt Gingrich. Barring the emergence of some dark horse, it now looks like it's Romney's to lose. I think he will manage to lose it if he cannot find it within himself to express the real fear growing in the land that Obama is wrecking the country

Newt Gingrich is demonstrating daily on television that he gets it and that he can deliver the message. Romney sounds like a politician from a cycle ago which might as well be a century ago. Newt gets it but it is not clear that Romney does. Romney must understand that every rule of the game has changed because of Obama. He must act as though he understands that business as usual is fatal. He must understand that Obama must be morally destroyed if the republic is to be saved.

Newt can deliver the message but the messenger carries a lot of baggage. Romney's main deficiency, the stigma of rinoism, can only be overcome by becoming the figure who morally destroys Obama. He must show that he has the courage and the fire to take Obama on. He must convince us that he understands that it is Obama or us. He must convince us that we are at a flashpoint of history and the whole country is literally at stake. 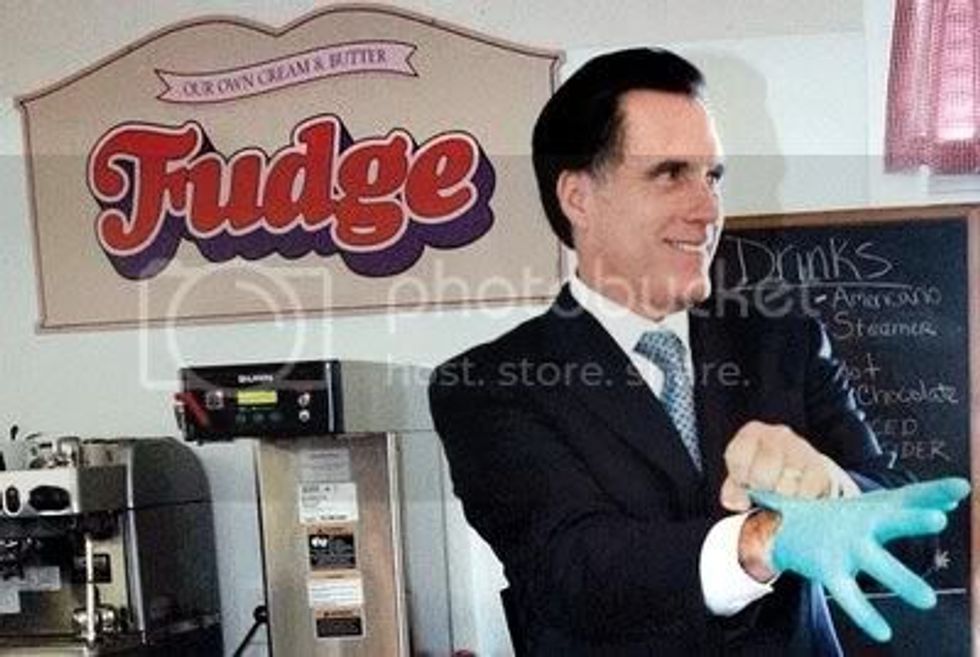 Romney is not winnable, he is the same old, same old that we've had before.

Pawlenty, Barbour, and Daniels would be good alternatives to Romney. At least those 3 guy completed 2 full terms as governor.

Two draft dodgers, draft evaders, or just two limp-Richards too good to serve in uniform while men their age were fighting and dying. How disgusting.

The way things have conspired to help Mitt Romney is almost "24" in its level of believability. If it was a plot twist on a TV show I would've said "Oh come on! Seriously?"

I guess Romney's four husky sons will be available to campaign with him, since none of them will be deployed anywhere (just like Dad...and Grandpa in their time).

Romney is no conservative. And anyone considering supporting Romney needs to have their head examined. Anyone around this forum, I should say.

And Mitch Daniels is no conservative either.

So this discussion is about Mitt's hair ???

Even you admit the guy is not socially conservative, he sounds like another send up from the moderate wing of the Rockefeller branch of the GOP.

You said - If you don't like Daniels, then Romney is the nominee by default in 2012.

Unlike Romney's "National Council for a New America," Free Republic is a conservative site!

If there is anyone here who doesn't understand why we cannot support a slick socialist politician like Mitt Romney, God help you, but you're on the wrong website. We went through this with the abortionist, gay rights activist, illegal alien supporting, gun grabbing Rudy Giuliani until someone created another website call WAnkers for Rudy and they all flew the coop. Hopefully, before too much FReeper blood is shed, someone will create a WAnkers for Romney site and we can be left to fight the good fight as we see fit!

No to Romney and Newt. Repubs can do better. To win, they need fire in the belly and an appeal to Independents.

Agreed. Romney is a weasel, and so is Gingrich. I don't even know who Daniels is, and I think I keep on politics fairly well.

I like DeMint. Also, Rep. Issa of CA. Let's hope neither of them is carrying on any affairs!

Please, no Jeb Bush! I've had enough of family dynasties.

The punditry is all but giving Romney the nomination. This is not yet assured of course, but it is now a larger possibility. Last year, when the nomination came down to McCain or Romney, many were wishing that there was a viable third party, but it was too late. I regretfully think that now might be a time to start the wheels in motion for a POSSIBLE third party.

Who else is going to stop Romney other than Daniels?

I prefered Romney over McCain but that was before I saw the behavior of the people in the Romney camp. There is no way in hell I'll vote for Romney. Voting for McCain was above and beyond for me and Romney is well beyond that now.

I will not vote for Romney...PERIOD!

One other name I'll throw in. Mike Pence.

Romney's main deficiency, the stigma of rinoism, can only be overcome by becoming the figure who morally destroys Obama. Romney's problem isn't his "rinoism." His problem is worse. He's a slickster chameleon. He couldn't break 50% in his birthstate's primary, which was one of his few wins, and that was when McCain blew it with his "jobs aren't coming back" talk.

Well I voted for Romney in the primaries last time... wont make that mistake again. He simply can't win and is "more of the same" from the GOP.

I'm sick of the Democrat-lite retreads. As long as the GOP keeps bowing to the likes of Romney, McCain, Kirk, Powell, Snowe, Collins, etc they will be losers. I wish they would all go join that Specter guy with the party that they belong in.

Romney sure isnt my guy but might vote for him in the general.All the rest are losers too expect of course Palin. Of course the media will get behind the Huckster which will excite the Jim Jones crowd but then open up on him and his followers during the general. I say its up to Palin to lead us out of this mess.

Exactly, Romney is NOT a conservative. He did little or nothing in Massachusetts. He will be eviscerated by the media. He couldn't get squat done in mASS. with an all Dim legislature. He did NOTHING for the Republican or Conservatives in mASS. and left the state with it's already budget busting health plan. A lot of supporters are looking to him only because the Big 0 is so awful.

Newt is a loser all the way around. He should be happy as a strategist. He blew his chance at Leadership.

Anyone who thinks Sarah Palin is retiring is insane. She knows that Myth Romney has nearly unlimited financial resources, but she will have no problem raising all the money she needs after she helps a bunch of people get elected next year.

As far as Mitch Daniels, hardly anyone outside of Indiana has even heard of him.

Controversial MyPillow CEO Mike Lindell's legal strategy was questioned on Saturday after he made an appearance on Steve Bannon's podcast.

"Either way Steve, I want to say this, I'll give Dominion [Voting Systems] a little scare this morning. Dominion, we have machines now, I do. I have machines, we have ES&S [Election Systems & Software] machines, we got them all and we're going to being putting out so much information over the next couple of weeks," Lindell said.