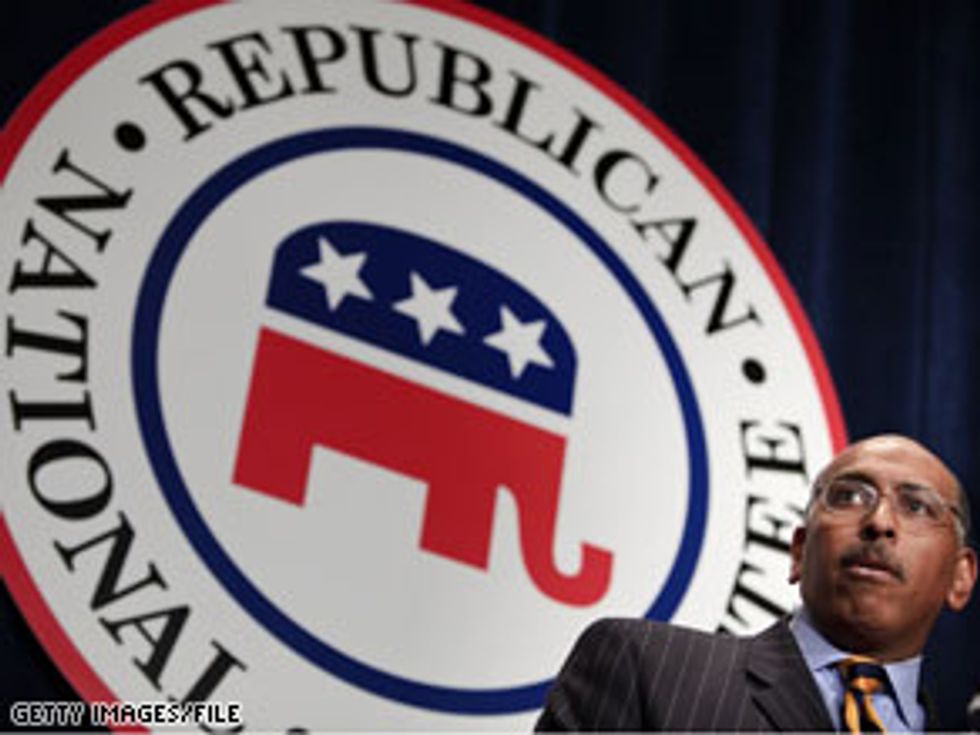 Just a week after top Republican aides told RNC Chairman Michael Steele's staff "you really have to get him to stop" making gaffes on national television, some Republican Party members have drafted a resolution to demand the party leader cancel his promotional book tour.

The proposal will be presented to RNC members at their conference at the end of this month. Former RNC General Counsel David Norcross, who held the party's top legal post under President George H. W. Bush, told The Washington Times, "I think the motion may be the way out of this mess, a step ahead."

The RNC told the Times that a "vast majority" of state party chairman still back Steele, and tried to play off the mutiny as a handful of "Washington insiders."

"There will always be a few folks who are Washington insiders and will work to oppose him," RNC Chief of Staff Ken McLay said. "The RNC and the chairman are focused on winning elections and not on inside-the-Beltway distractions."

Former Texas Republican Party Chairman Tom Pauke told the paper he has "nothing against Michael Steele personally. I just think that he is in over his head."

"This is a time when the national Republican Party needs bold, conservative leadership to do battle with the most liberal regime in American history," he added.

Party critics are focusing on the difference between Steele's book tour and a book written by former RNC Chairman Haley Barbour. Barbour's 1996 book proceeds went to the National Party Forum; Steele's book proceeds accrue to himself. Critics say Steele is abusing the power of his office for personal gain.

Seemingly defiant, Steele told his critics last week on ABC News radio to "shut up [and] get with the program or get out of the way."

Last week, a top GOP congressional aide said on a conference call with Steele's staff that "Steele is setting us far back with his comments and it needs to stop."

The Senate aide then reportedly called Steele a "fool."

"You're putting our bosses in tremendously difficult situations," a House aide allegedly added.

Steele's staff have said they don't have control over what he says while promoting his book, noting that he's employed an outside PR firm to handle his bookings.