Call the Waaaambulance for the NOM-ster. Actually, Maggie, I haven't been thinking about you much at all, since that summer NOM bus tour was such a raging failure that I dropped you and perpetual flop-sweating Brian Brown down onto my third-tier list of homophobes along with The Peter and Ken Hutcherson. But if you want me to point some fingers at bigots who have helped create a climate of discrimination that reinforces young LGBTs that they are not equal in the eyes of the law, I'll be happy to do so. (NYP): 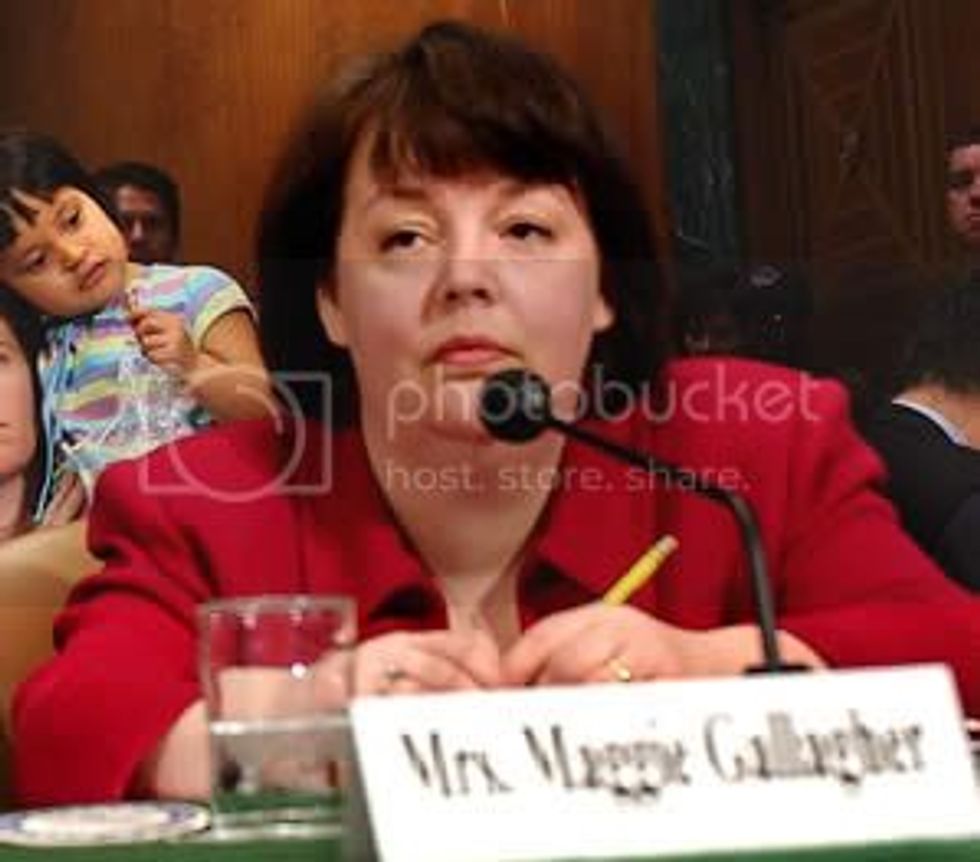 Do I have blood on my hands?

Major gay-rights groups are saying so. Each of us who opposes gay marriage, they say, is responsible for the terrible and tragic suicides of gay teens that recently hit the news.

San Francisco just filed a brief in the Prop 8 case, saying 7 million Californians who voted to protect marriage as the union of one man and one woman are responsible for high rates of suicide among gay people.

Evan Wolfson, one of the leading architects of the gay marriage movement, calls me out personally: "National Organization for Marriage Chairman Maggie Gallagher is among those who, with reckless disregard, attacks LGBT youth."

Former Clinton adviser Richard Socarides told the AP these suicides demonstrate why gays should be allowed to marry: "When you speak out for full equality now, as opposed to partial equality, or incremental equality, you send a message to everybody, including the bullies, that everyone is equal."

Apparently, either we all agree that gay marriage is good or gay children will die.

It's a horrific charge to levy in response to some pretty horrifying stories. Will gay marriage really reduce or prevent gay teen suicide? I felt a moral obligation to find out.

She then goes off on a tangent to discuss statistics about gay youth suicide, sexual intercourse, drug abuse and yes, bullying. Then she says this:

Forced sex, childhood sexual abuse, dating violence, early unwed pregnancy, substance abuse -- could these be a more important factor in the increased suicide risk of LGBT high schoolers than anything people like me ever said?

Gallagher's blind spot is mind-boggling. It clearly does not occur to her that adults -- parents who hold views like hers send a clear message to their children about inequality -- for LGBT kids, they hear intolerance, or experience abuse from homophobic parents. For other children, their parents' homophobia gives them license to bully gay (or perceived to be gay/non-gender-conforming) kids. The bigotry trickles down. What people like Maggie Gallagher say to their children can translate into kids who seek to escape through drug abuse, casual or high-risk sex. And some of those kids see no way out -- certainly no support system at home if NOM's message is what's delivered to them.