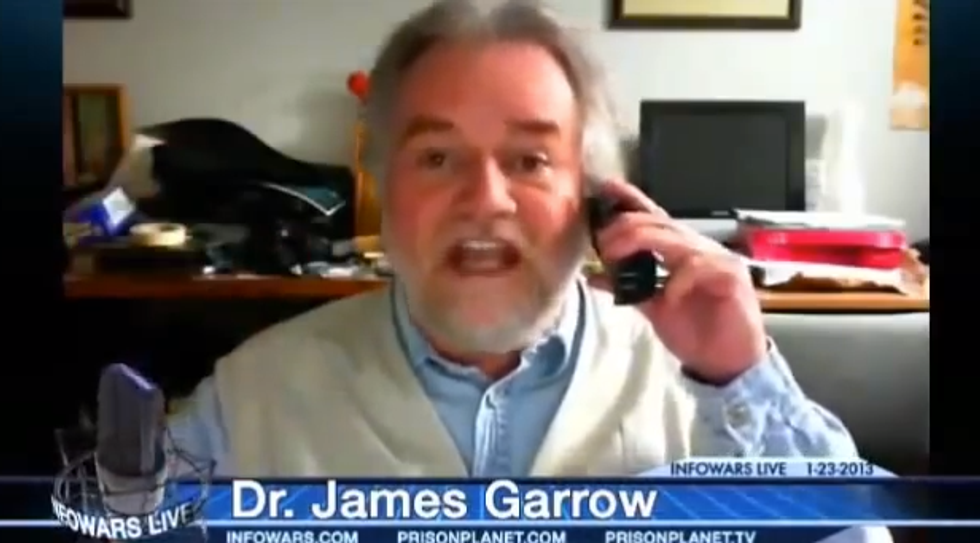 A birther conspiracy theorist who inaccurately predicted that President Barack Obama would order nuclear attacks on U.S. cities has improbably found a way to top that wild claim.

Conservative activist Jim Garrow appeared Monday on Fox News contributor Erik Rush’s radio program, where he claimed that Obama would try to boost his tanking poll numbers by claiming that scientists had communicated with extraterrestrials.

“What we’re going to be seeing soon is the unveiling of the concept that we have, in fact, been contacted and have been in communication with people from other civilizations beyond earth, and that will be part of the great deception,” Garrow said.

Garrow, an Ontario native who claims to be a former U.S. intelligence officer, said he suspects Obama will soon implement a plan that’s been in the works since the 1960s.

“It’ll be a great fraud, the whole basis of this, it is a great hoax,” said Garrow, a contributor to Alex Jones’ InfoWars and accused child trafficker.

The conspiracy theorist said he knew the plan would be hatched soon because the CIA operative who first told him of the plot, more than 30 years ago, had been found murdered two months ago in Hong Kong.

Garrow -- who claims Obama had ordered the deaths of conservative blogger Andrew Breitbart, journalist Michael Hastings and novelist Tom Clancy because they knew he was a Saudi double agent – said the plot would be “the greatest deception that mankind has ever faced.”

Garrow said the next step in Obama’s plan would be to order the military to attack Americans who aren’t deceived by his alien contact hoax, but the conservative activist doubted that U.S. troops would turn against their own.

That, of course, is where Chinese, Russian and United Nations forces come in, as well as Canadians.

“U.S. troops swear allegiance to the Constitution, but the Canadians don’t,” Garrow warned.

He claimed that Obama and Canadian Prime Minister Stephen Harper had signed an agreement to assist one another militarily in the event of an insurrection.

“Now we’re bringing in a new element, a group of people who could be armed and could be in a position to shoot American civilians who have never sworn allegiance to the Constitution,” he said.

That’s where the plan gets so complicated that even Garrow has trouble keeping it straight.

“I don’t know where that would fit with respect to the Chinese and Russian, who happen to be here under whatever guise, whether it be training or sharing of information, who knows what they might be in place,” Garrow said. “(But) it opens up a pretty scary scenario.”