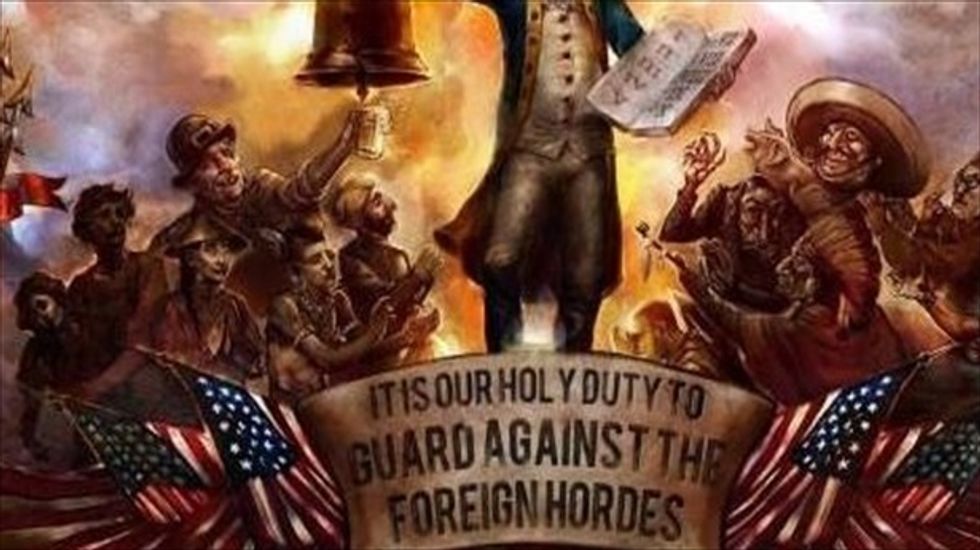 A Florida Tea Party group found itself on the defensive Monday after posting a photo from a video game that was actually making fun of its political leanings.

"We don't take credit for the image," National Liberty Federation (NLF) president Everett Wilkinson told The Raw Story in a phone interview. "We have no association with the game. I'd never heard of the game. I'm as clueless, probably, as most people."

MSNBC reported that the picture, taken from the video game Bioshock Infinite, went up on the group's Facebook page on Saturday, and depicts George Washington holding the Liberty Bell and the Ten Commandments while caricatures of "immigrants" hover at his sides, with the words, "It is our holy duty to guard against the foreign hordes" at the bottom. The post was taken down Monday, but here's a screengrab:

As video game news site Kotaku pointed out, the picture is used in the game as propaganda by a group of xenophobic characters called the Founders. Kotaku also reported on Friday that members of the white-supremacist online forum Stormfront criticized the game for employing "strange, borderline-deranged (if not psychotic) themes with anti-White undertones" and accused Ken Levine, owner of Bioshock developers Irrational Games of using the game as a "white-person-killing simulator."

"Since games are distributed and advertised through much of the same pipelines as Hollywood movies, Jews have a temendous advantage in the industry, since as everyone knows they already control Hollywood," one Stormfront user posted. "This means competition can be choked out, and their own games bolstered to success."

On Monday, Wilkinson said his group -- previously known as the South Florida Tea Party -- "removed" the person who posted the image.

"We're a conservative organization, so we understand that some people may not necessarily like our views," Wilkinson told Raw Story. "But we don't tolerate racism, what you might consider hate messages or anything like it."

However, MSNBC reported that while the Bioshock post was taken down, a post comparing Islam to rabies in a quote attributed to former British Prime Minister Winston Churchill is still active, as are posts comparing President Barack Obama to Adolf Hitler and to cancer.